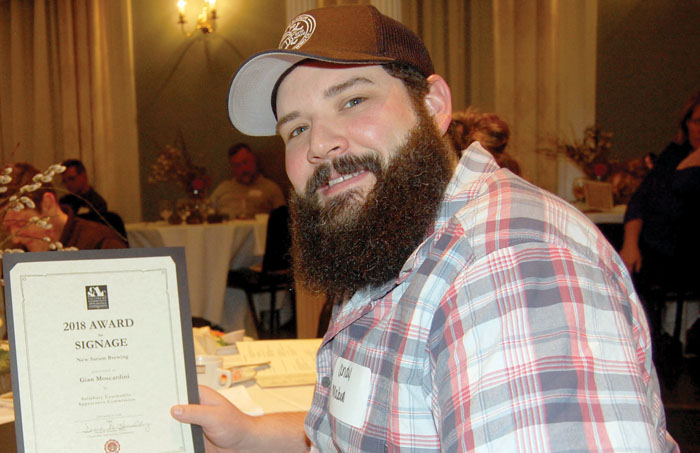 Andy Maben of New Sarum Brewing receives the signage award for going above and beyond the other signs in downtown Salisbury. Spencer Dixon/Salisbury Post

SALISBURY — The Salisbury Community Appearance Commission and the city’s Tree Board held their biannual awards program Thursday at the Rowan Museum, honoring a number of local residents.

“The night is about bringing forward positive things people in Salisbury are doing and celebrating it together,” said Alyssa Nelson, liaison to the commission for the city.

Paul Fisher received the James A. Dunn Award from Jim Dunn for Fisher’s design expertise on the Gateway Building, serving on the Bell Tower Green board, and his corporate and individual contributions to reinvigorate the 200 block of North Main Street with the establishment of F&M Financial Center, Easy Street and the renovation of Waterworks Visual Arts Center and F&M Trolley Barn.

Horizons Unlimited was given the Susan W. Kluttz Sustainable Salisbury Award, presented by Lynn Raker, for its significant contribution to the long-term management of Salisbury’s environmental, social and economic resources, with an emphasis on preserving and enhancing those resources for future generations.

Tamara Sheffield presented the 2018 Mayor’s Cup to Emily Perry for her work to bring recognition and preservation to Salisbury’s African-American heritage through the establishment of the Dixonville-Lincoln Memorial.

“The Community Appearance Commission started in 1984 with the purpose to engage citizens in making the city more attractive for the purpose of economic development,” CAC Chairwoman Diane Hundley said.

With that mission in mind, the CAC give out a monthly award between April and October for best residential and commercial landscaping, an award for best holiday storefront decorations, and development awards. Winners for 2016 and 2017 were recognized at the awards program.

In the urban landscape category, Alligood Automotives, the Bernhardt House, The Chill and The Kitchen Store were recognized.

The Development Awards were split into five categories.

• For new construction, Brenner Crossing Apartments was chosen for its soft presence, inclusion of a common space and its treatment of landscape/tree scape as well as its being a good urban design.

• For building renovation/adaptive reuse, New Sarum Brewing was chosen for its quality and extra touches to complete a fun new place downtown.

• For structural preservation, Hogan’s Alley was chosen for its craftsmanship and the inviting nature of the space.

• For best signage, New Sarum was chosen because, according to judges, “it is really over and beyond many of the signs in the downtown.”

In addition to CAC awards, the Tree Board presented three awards, for tree planting, tree preservation and tree stewardship.

Mark Martin, liaison to the Tree Board, explained the connection between the Community Appearance Commission and Tree Board. The CAC “beautifies the community; we beautify the environment, so it goes together really well,” said Martin.

• The tree planting award went to Cristian Angel and Jeremy Tatum, 305 E. Innes St., for planting 61 trees on their property.

• Julius Peeler, 308 S. Fulton St., received the tree preservation award for hiring multiple professionals to evaluate, properly prune and treat a large willow oak at the front of his property.

• The tree steward award was presented to Bill Godley of Godley’s Garden Center and Nursery for his professionalism and willingness to promote trees in Salisbury.

Meet Rex, the newest K9 member of the Rowan…