Yun’s the one: S. Korean gets skeleton Olympic gold 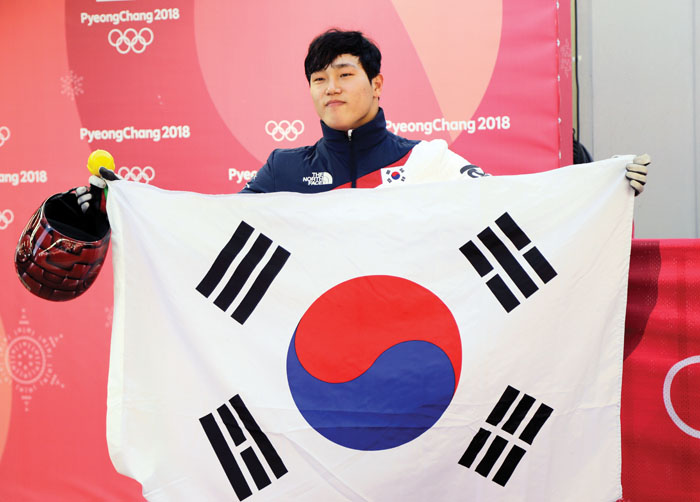 He’s a 23-year-old who was expected to win gold and nothing else at these Pyeongchang Olympics, in his home country, with thousands of his countrymen showing up early on a Friday morning to chant his name and await a coronation.

A daunting task? Not for skeleton’s new king.

Yun won for fun at these Olympics, dominant by every single measure. His four-run time of 3 minutes, 20.55 seconds was a staggering 1.63 seconds ahead of silver medalist Nikita Tregubov of Russia — the largest victory margin in Olympic skeleton history, and the largest margin in any Olympic sliding event since 1972.

“There was no reason to feel any pressure,” Yun said. “I mean, it’s my home track. So I can really feel at home here. And I think that I always believed it would come out greatly if I do the same things I’ve always done.”

Yun’s lead kept growing and growing: 0.31 seconds after one heat, 0.74 seconds after two, 1.02 seconds after three. He set the start record Thursday and lowered his own track record in the final heat on Friday, going all-out even on his final slide and becoming the first South Korean to win a gold medal in any sliding event.

Put simply, none of the other 29 men ever had a chance.

Frida Hansdotter of Sweden has held off American Mikaela Shiffrin and a tightly bunched field to win the Olympic slalom title at the Pyeongchang Games.

Shiffrin wound up fourth after medaling a day earlier in the giant slalom. She won the slalom title four years ago in Sochi at age 18.

Hansdotter was in second after the first run, then powered through the sun-splashed course on her final run to finish in a combined time of 1 minute, 38.63 seconds.

Most skeleton races are decided by tenths or hundredths of a second. The average winning margin in a men’s World Cup skeleton race this season was 0.37 seconds. Matt Antoine of the U.S. is a World Cup race winner; he finished these Olympics in 11th place, 3.84 seconds behind Yun.

“I’m looking at this right now as the whole of my career, the last 15-plus years,” Antoine said. “This is just one race. The result is what it is. To be here, with my family here, everyone supporting me, that’s all I could have asked for.”

John Daly, the other American in the field, was 16th in his third Olympics.

Yun stepped onto the award podium shortly after finishing, arms skyward as his fans roared. They showed up early on a bright morning in the Taebaek Mountains, fully expecting to see the sort of dominance he himself envisioned when taking thousands of training runs on the track that was built for these Olympics, the track he knows better than anyone else in sliding.

Happy New Year, indeed. On a national holiday in South Korea — the start of a lunar new year — Yun became a national hero.

“Yun Sungbin is a very strong athlete,” Tregubov said. “I believe he has no minuses. Excellent start. He stays calm. Excellent technique. He is better than me.”

There was no shame in saying that. Yun was better than everyone.