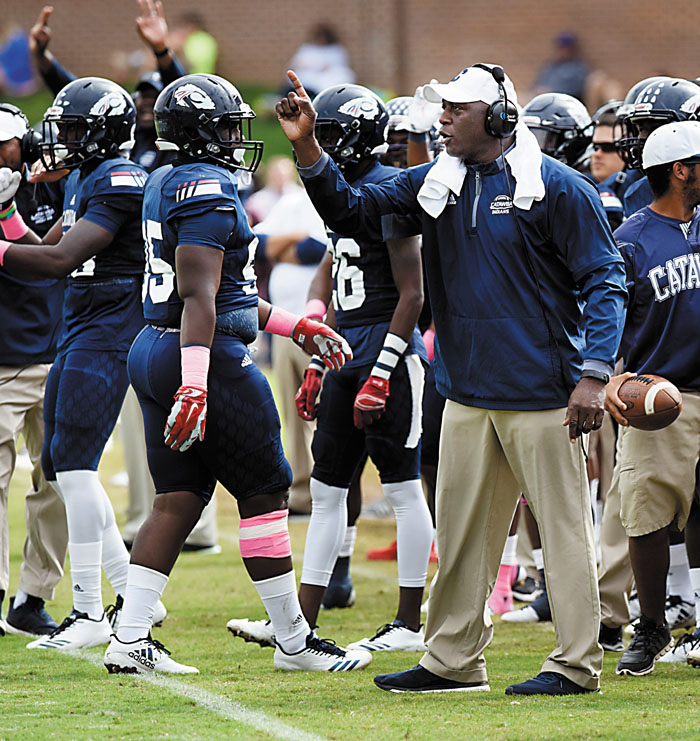 Reid Carlton has shown what he can do under fire, and after receiving a medical redshirt for his aborted 2017 season (he started the first two games),  the 6-foot-3 Florida product still has two seasons of eligibility. Catawba also believes the future can be exceptionally bright for Ken Avent III, a redshirt freshman who drew raves for his work on the scout team and still has four years in uniform.

Now the Indians have added another potential starting quarterback. Jack Mangel (6-3,205), a prospect from Athens, Ga.,  is among the headliners for Catawba’s latest recruiting class. He verbally committed back in the fall and didn’t waver from that pledge when it was time to sign last week.

Mangel threw for 1,873 yards for Clarke Central High as a senior. He led his team — the Gladiators — to a 7-4 record. He’s been a solid three-sport athlete. He’s rated as a player with good mobility and an exceptional arm and he’s considered to be advanced for a high school senior as far as reading defenses.

“We like the quarterbacks we’ve got, and we’re excited about Mangel,” Catawba head coach Curtis Walker said. “He’s coming in to compete and competition is a good thing. It’s what motivates guys to be their best. He adds to our depth and really solidifies that position for us.”

As of Wednesday afternoon, Catawba had received 15 commitments.

“We didn’t have a lot of scholarships to give, so this is going to be a relatively small recruiting class,” Walker explained.  “But we still hope, in time, to add about 40 players to our program. We’re happy with the guys we have signed so far. We were able to do a lot, get some kids who had a lot of other offers. We found good players with good families that fit our program well.”

There’s a chance that Lovelle Williams Jr. (5-10, 165) will be catching a lot of passes no matter who plays quarterback for the Indians. Williams arrived at Mallard Creek High as a senior after transferring from Mandeville High, near New Orleans.  Williams enjoyed some huge games before he was injured and torched Scotland County. His injury probably factored into Catawba being able to land him. In seven games, Williams had 22 catches, 500 yards and five TDs.

Catawba lost a dynamic receiver in Sam Mobley, but Williams could be part of the solution to replacing Mobley.

Catawba is bringing in a stack of offensive linemen.

Blake Bridges (6-4, 290) probably leads the list. Walker is high on Bridges, mostly because of the competition he excelled against while competing for Brookwood High in Snellville, Ga. He’s considered proficient as a pass-blocker as well as a run-blocker. It’s hard to find high school guys who are well-schooled at both.

“He’s just a big ol’ guy who fell in love with Catawba,” Walker said. “He has a chance to be an excellent offensive tackle for us. He started three years and his high school played 7A football. So he’s played against some of the best defensive ends in a strong football area.”

While Catawba has signed only a handful of defensive players so far, but Walker is excited about the quality of the recruits.

Elijah Banks, a Mount Tabor High cornerback, is a player Walker saw in person in a couple of playoff games last fall. The Indians are looking for competitiveness and instincts when they scout a cornerback, and Banks (6-0, 165) received high marks. Among other things, he had the game-saving interception in the first round of the 4A state playoffs against Porter Ridge.

“What sold me was watching him play against an option team,” Walker said. “They didn’t pass much, but whenever they tried to hit a pass play, he was always in the right place. Johnny on the Spot. He did not get fooled. Great instincts.”

Defensive lineman Cortay Stephens (6-1, 255) should be a starter down the road. Stephens, who played for Hertford County High in the eastern part of the state, committed verbally early on, but it was still a relief when his signed letter of intent arrived at the Catawba field house. He’s a stud.

Walker is still a linebacker at heart, so he’s always thrilled when Catawba’s recruiting net brings in a good one. Tylon Clawson  (5-11, 210) comes to the Indians after a celebrated, four-year varsity career at Charlotte’s Independence High. Clawson’s father, Elton, played linebacker at Western Carolina.

“His daddy is still in playing shape, and he’s taught his son some of the tricks of the linebacker trade,” Walker said. “We lost a guy (All-American Kyle Kitchens) who had 38 career sacks, but we believe Clawson is a guy who can help us put some pressure on quarterbacks.”

Nasjzae Bryant (5-10, 215), another Mallard Creek product, is a potential starting linebacker for the Indians, who have to replace multiple standouts at that position. Bryant was a combination linebacker/running back for Mallard Creek. On offense, he rushed for 844 yards and 12 TDs.

Jacob Young, North Rowan’s All-State punter as well as a proficient kickoff man and placekicker, made things official with Catawba on Wednesday.

Walker said quarterback, defensive linemen, receivers and offensive tackles were the priority for this recruiting class. H e hoped to have good news on several more key recruits in the days ahead.

“National Signing Day can be crazy,” Walker said. “There are still a lot of good players who haven’t decided yet, guys who are still investigating schools and looking at programs.”

NOTES:  Catawba has a new offensive coordinator. Dustin Ward has replaced Kevin Brown, who had a long and fruitful association with Walker at Coastal Carolina and Catawba.

Ward, who was a four-year letterman as a quarterback at Illinois, has coached at DePauw, Saint Joseph’s College, Concord University (W.Va.) and VMI.

“Our style of (balanced) offense will stay the same,” Walker said. “Coach Ward has a great track record, and he’s getting settled in here now.”

Yun’s the one: S. Korean gets skeleton Olympic gold