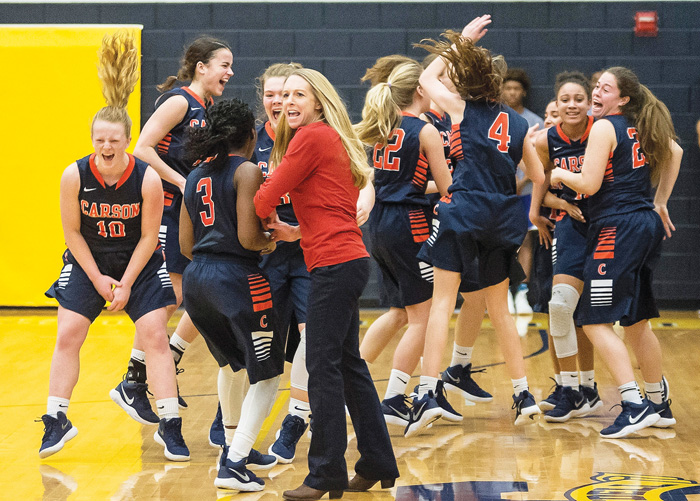 TROUTMAN — With a conference championship on the line, it was fitting that Carson and North Iredell would produce one clutch play after another down the stretch.

In the end, however, the Cougars came up huge on defense and held off the top-seeded Raiders, 51-50, here Friday night at South Iredell High School.

Frenetic might be the better word to describe the final 25 seconds of the North Piedmont Conference Tournament championship battle. After leading all of the fourth quarter, Carson was suddenly down, 50-48, with just 23.5 seconds left, after a clutch three-point play by junior forward Rachel Lalonde.

But Carson senior guard Olivia Gabriel capped off a stellar 26-point night by responding with her own three-point play with 8.5 ticks left, lifting her team to a 51-50 lead.

At that point the Cougar defense took over — more specifically, junior McKenzie Gadson stepped up to save the game. With North Iredell working for a go-ahead shot, Gadson tipped the ball away and out of bounds with a mere 0.7 left on the clock. After back-to-back time outs, the Raiders lobbed the ball in to 6-foot star forward London Liles, just beyond the foul line. With Gadson right in her face, Liles attempted a shot, but Gadson was able to alter the effort as time expired.

“I was just thinking don’t foul,” Gadson said. “I knew I had to get my hands in her face and not let her get a shot off.”

Liles leaned in on the final attempt as the ball fell well short of the basket, but despite some contact between the two players, there was no whistle.

“We felt like they were going to lob it in,” Cougars’ coach Brooke Stouder stated. “So we wanted to make sure we had good help and especially make sure we didn’t foul. McKenzie did a great job of staying straight up on that very last possession. That was just a couple of really gutsy defensive possessions in the last 8.5 seconds.”

In a season with a lot of “firsts” with historic significance, Carson (23-3) won its first-ever conference title. The Cougars also tied its all-time number of wins in a season, with a chance to set a new mark in next week’s state 3A playoffs. It was also the first time this season Carson was able to get past North Iredell (21-5), the NPC regular season champs, with two previous wins over the Cougars.

“I’m just speechless,” a jubilant Gabriel said afterwards. “We have been waiting for this such a long time and it really feels good.”

Gabriel was a driving force in the championship effort with 22 of her game-high 26 points coming in the second half, including a trio of 3-pointers, the huge three-point play at the end and 8-of-9 free throws made in the final period.

“Olivia’s three-point play was just huge for us,” Stouder said. “She did a great job, especially in the second half of getting the ball and just driving and making the tough shots when we needed them.”

With both teams employing a tenacious zone defense in the first half, points were hard to come by as North led, 15-8, after one quarter and 19-15 at the half. The pace picked up significantly in the second half as the much taller Raiders finally started getting inside to Lalonde and Mackie Allen for layups. But Gabriel and freshman guard Ellie Wilhelm (11 points) started connecting from long range to get the Cougars back into the game.

“Our whole team worked hard for the big shots,” said Wilhelm. “I got the opportunity to help and I had to knock it down.”

Carson entered the final quarter up 33-30 on Gabriel’s long bomb at the buzzer. The margin reached six points on another Gabriel three and was still 42-37 with 3:55 left, on a pair of Lani Isley foul shots.

But North Iredell is too good to not battle back as they closed to within one point on two occasions. That set the stage for the dramatics in the final 23 seconds.

“Obviously, it was a heck of a game and about like I expected,” said Raiders’ head coach Roger Bumgarner. “They are a tough team and Gabriel was really good. She is so quick and hard to guard.”

Although he would not comment on the final play of the game, it was clear Bumgarner was hoping for a whistle. But it never came. “We played hard and as long as we play hard, I am good with that,” he added.

The Patriots were led by Lalonde with a stellar effort of 22 points and 13 rebounds. Allen added 13 points.

Now both teams will await the state 3A pairings to be announced some time today. Both should get first-round home games.

In the meantime, Stouder is going to celebrate her team’s first-ever championship. “It has been a season of a lot of firsts for us,” she said. “This is one we are really going to enjoy.”