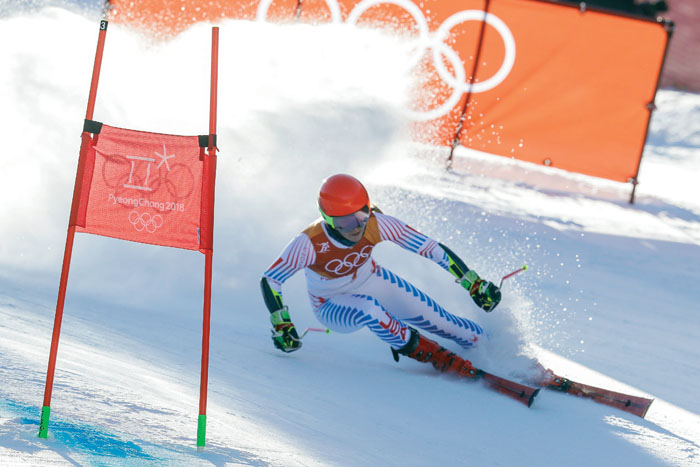 PYEONGCHANG, South Korea (AP) — Mikaela Shiffrin turned in an electric first run of the Olympic giant slalom to put herself in prime position for a gold medal.

The 22-year-old American standout trails Manuela Moelgg of Italy by a scant 0.20 seconds heading into the final run Thursday afternoon at Yongpyong Alpine Center. The sun was out and the wind muted.

Finally, the women were racing.

Shiffrin was just happy for that, given all the postponements due to weather and strong wind. The women’s giant slalom was initially scheduled for Monday but moved to Thursday. The slalom was supposed to be Wednesday but got pushed to Friday.

Down the road about 30 miles (50 kilometers) in Jeongseon, the men are racing the Olympic downhill Thursday. That was supposed to take place Sunday.

“Oh my gosh, last night, I was like, ‘Are we ever going to race?!’” Shiffrin said, laughing. “It’s really nice. And it’s fair today, which is really, really important, especially at the Olympics. The conditions are great. The weather is beautiful. And it’s a pleasure to be racing today.”

The top 30 finishers from the first run go in reverse order for the final run, with their times combined to determine the winner. Shiffrin will be second to last. Moelgg was the first racer on the course and finished in a blistering time of 1 minute, 10.62 seconds. Her best finish at the Olympics was 11th in the slalom at the 2010 Vancouver Games. The 34-year-old Moelgg has never won a World Cup race.

On her first pass through the course, Shiffrin described the snow as “chattery” in the middle section, meaning she — along with everyone else — was in for a bumpy ride.

“I still think everyone had some first-run jitters. So what you saw there from anybody, it wasn’t really a good depiction of what we can all do,” Shiffrin said. “So second run is going to be like a new race. I think it’ll be really, really interesting.”

Shiffrin finished fifth in the GS at the 2014 Sochi Games. She’s the defending Olympic slalom champion.

Coming into these Winter Games, there was talk about Shiffrin possibly chasing after not one or two but five medals. Given the compacted schedule due to all the delays, the plan could be altered. The flip-flopping has been particularly burdensome.

“It’s been a difficult few days, but it’s all about remaining positive and remaining energized and excited to get the Games going,” said Mike Day, Shiffrin’s coach. “At this point, the difficult days are just motivation for actually getting to compete. We’re battling a little bit of fatigue from going up and down the gondola every day, and the excitement of getting ready to race and the disappointment of not getting to race. But we’re in good shape.”