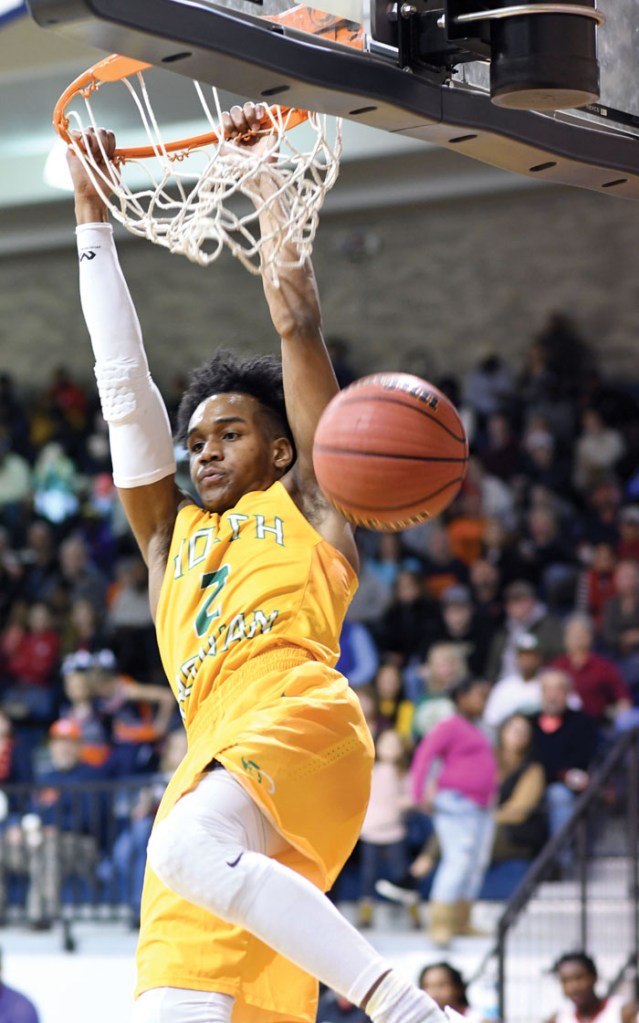 MISENHEIMER — The second-seeded North Rowan boys’ basketball team entered Thursday’s Yadkin Valley Conference Tournament semifinal matchup with No. 3 Albemarle already owning two wins over the Bulldogs.
However, those wins came by a combined total of nine points.
Last night’s game was no different as the Cavaliers lost an 11-point lead but fought back and held off the Bulldogs for a 60-59 win, here at Pfeiffer University’s Merner Gym.
Brevin Goodlett led North Rowan (16-8) with 16 points, including 6-of-10 at the free throw line, while Dayjuwon Cooke added 10 points, the final two of which came on a breakaway jam — after a steal by Goodlett — securing the game in the final seconds.
Albemarle’s King Medley, the victim of Goodlett’s defensive play, was the top scorer in the game with 19 points. Adafe Price added 18 points, his 14th time in the past 15 games in double figures, and Noble Washington scored 15 for Albemarle (19-7).
The Bulldogs led early in the second quarter, 17-15, but an 11-2 North run over a four-minute period put the Cavs ahead, 26-19.
Leading by five points at halftime, the Cavs  knocked down a trio of 3-pointers and built a 42-31 lead with 2:50 left in the third quarter.
Albemarle tied the game midway through the fourth period and took a 54-53 lead with 3:58 left in the final period. The Cavs scored the next five points in a row, including free throws from Goodlett and David Broaddus.
Cooke’s dunk put the Cavs up 60-56 in the final seconds and Medley hit a 3-pointer as the clock expired for the game’s final score.
“It was a battle,” said North head coach Bill Kesler. “There were five athletes on the floor for both teams at all times. “We are still learning what to do in our situation … we have to keep competing.”
North Rowan will take on top-seed North Stanly in the championship game, tonight at 7:30, at Pfeiffer.
“It would be big (to win),” added Kesler. “We like to get trophies and plaques and stuff like that. We’re trophy hunters. Adrenaline will take over tomorrow night. We feel good about getting to the finals and continuing the season as long as we can.”
ALBEMARLE (59) — Medley 19, Price 18, Washington 15, Christian 4, Williams 3.
NORTH ROWAN (60) — Goodlett 16, Cooke 10, Page 8, Colson 8, Q. Smith 8, Clement 6, Broaddus 4, Goodes, Davis, Stoner, J. Smith.