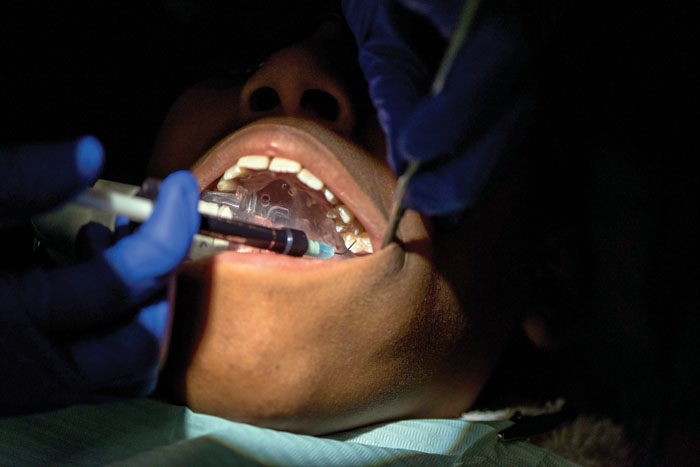 One by one, roughly 20 students reported to a room at Koontz where Public Health dental hygienist Angela Hodges ushered them into a chair.

Hodges turned on an overhead light and slowly walked students through what she would be doing — from using a small mirror to get a look at their molars to the application of the clear, goopy sealant.

“I’m going to put some stuff on your tooth that’s like fingernail polish,” she told one student.

Hodges has been at Koontz all week as part of an initiative of the Rowan County Smile Center. Each year, the center screens students in seven area schools and provides sealants at one school. Schools served include Koontz, North Rowan, China Grove, Overton, Hanford Dole and Hurley elementaries.

According to Elizabeth Davis, quality improvement specialist with the Rowan County Health Department, those schools have some of the highest free and reduced-price lunch percentages in the county.

“Children in these populations are at higher risk for cavities,” Davis said.

It’s also a population of students who may have difficult getting to, and paying for, a dentist. During its screenings, the Smile Center provides parents with an update on their child’s dental health. But when they apply sealants, dental hygienists hope to help reduce the risk of cavities.

Molars, designed for chewing and grinding, also posses small, deep grooves in the top, where food and other debris can become trapped.

“The toothbrush bristles can’t get down in there,” Hodges explained.

That’s where the sealant comes in. The clear substance fills in the deep cracks, making it less likely that food will become trapped and possibly form a cavity. And for elementary students, that can make all the difference. “With dental pain, you can’t really concentrate on anything else,” Davis said, “let alone go to school and do work.”

So the Smile Center tailors its sealants toward those who will benefit most: children who have lost their baby teeth but haven’t yet formed cavities.

According to Hodges, getting sealants at school provides a different experience than the dentist’s office. The location is familiar, staff has pop tunes playing from a speaker and Hodges talks to each student about his or her day.

And for the most part, students have been relaxed as they move from brushing their teeth with a new toothbrush to taking a seat in the gray dental chair.

The program is grant-funded and in its second year. While Koontz will be the only school getting sealants this year, dental screenings are scheduled for other area schools. Equipment for adding sealants was loaned by the state.