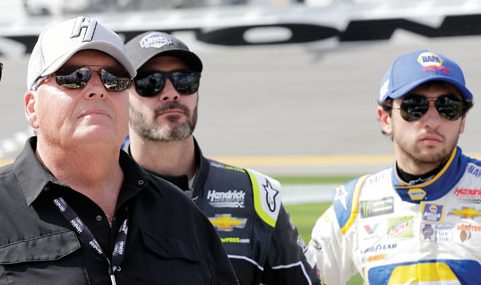 Car owner Rick Hendrick stands with Jimmie Johnson, who has since moved on, and Chase Elliott, who closed out 2020 on a hot streak to win the his first Cup. But there was no party for Elliott’s championship because of COVID-19. (AP File Photo/Terry Renna)

It was a lavish car unveiling that used lasers, spotlights and an emcee to celebrate a Hendrick Motorsports roster that had undergone a dramatic makeover.

Each of the four drivers was paired with someone for the event. Chase Elliott was joined by his Hall of Fame father, Bill, who helped uncover the new No. 9 his son will drive this year in his honor.

William Byron was introduced with Jeff Gordon, who won four titles in Byron’s new No. 24. Alex Bowman came out with Dale Earnhardt Jr., the guy who helped him get his ride when Earnhardt retired. The team owner accompanied seven-time NASCAR champion and Hendrick frontman Jimmie Johnson.

Standing next to glittering new race cars, the quartet was able to briefly mask the striking youthfulness of Hendrick’s rebuilt organization.

Now, at the Daytona 500, the four drivers stand alone.

They passed their first test, and the boss could not be prouder.

Bowman, who sat out all of last year waiting for Earnhardt’s seat to open, put a Hendrick car on the Daytona 500 pole for a record-tying fourth consecutive year. Johnson was third fastest. Byron, a rookie rushed into a Cup car this year because Kasey Kahne was fired, was fifth. Elliott was 10th.

“We’ve got a lot of racing to do and we’re going to make mistakes,” Hendrick said. “But to come down here, it’s a statement by the whole organization to run four cars and get them that close.”

Hendrick preemptively noted that the organization may have a roller-coaster season, largely because of the various resumes on his roster.

Johnson is the best of his era, and even though Elliott is entering just his third season, he made NASCAR’s playoffs last year and proved he has the potential to be a star.

Bowman and Byron? Well, no one knows yet.

Byron won seven races as a rookie in the Truck Series in 2016 and would have won the championship, too, but an engine failure stopped him nine laps away from what should have been win No. 8.

He won the Xfinity Series title last year, earning the promotion to the Cup series. His Cup debut will be the Daytona 500, and his first time racing a Cup car at all will be Thursday in a qualifying race. He’s 20.

Bowman had a brief career as a backmarker in the Cup Series, but was basically out of a ride when he received a lifeline from Earnhardt. JR Motorsports got Bowman nine Xfinity Series races in 2016, and when Earnhardt was sidelined, he pushed Hendrick to put Bowman in the car.

Bowman was good enough in those 10 races — a golden-ticket-type audition — and landed the job full time when Earnhardt retired. He had to sit out all of last year as he waited, but Hendrick made it up to him with an engine that has him on the Daytona 500 pole. He’s 24.

Aside from Johnson, in his 17th season, the roster has a combined 158 Cup starts with zero victories. It’s three kids, Hendrick views it, at the start of their careers. Byron, Bowman and Elliott are fast, and will now develop their talents in the best equipment with on-the-job training.

Hendrick knows there will be bumps. But he doesn’t care because there’s some fresh air in the building.

“It’s fun, and that’s what I need at this point in my life. I need to have some fun,” Hendrick said.

Winning the pole was definitely fun, and Hendrick used the opportunity to back Bowman into a bet in which the two will drag race their Corvettes. The loser also will lose his ride. Bowman is still making payments to a Hendrick dealership on his car.

Hendrick, forever a car salesman, was wheeling and dealing with his new prospects. A sheepish Bowman made it clear he’ll do whatever the boss says. This is, Hendrick said, like 1993 when 21-year-old Gordon blazed his way into the organization with a ridiculous mustache and a briefcase that carried nothing but a racing magazine and a Game Boy.

“These young guys, I mean, I’m kind of reliving Gordon with his little pencil mustache,” Hendrick said. “When Jeff Gordon came along, I just saw something in him that I said, ‘All that talent, just put him in the right spot and he’s going to do well.’

“We had good luck with that.”