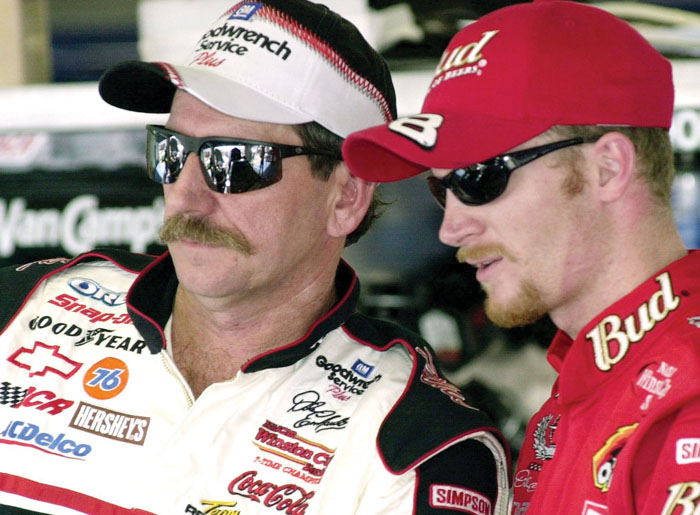 AP Photo/Paul Kizzle, File In this file photo from 2001, just nine days before his death, Dale Earnhardt, left, talks with his son Dale Jr., at the Daytona International Speedway. Earnhardt Jr. worked with Goodyear to make a new commercial that honors his late father and shows the family history with the tire maker.

DAYTONA BEACH, Fla. (AP) — Ralph Earnhardt died in 1973, almost a full year before his grandson was born. Dale Earnhardt Jr. had seen photos of his grandfather and listened to stories about the first racer in the family, but he never felt as if he knew the man.

Then Dale Earnhardt Sr. discovered footage the Earnhardts believe is the only known video of Ralph Earnhardt speaking on film. He was being interviewed after a race at Charlotte Motor Speedway, and Earnhardt Sr. popped the tape in for his son to watch.

Earnhardt recalled that moment with his father, watching the grandfather he never met, in an interview with The Associated Press about a new Goodyear commercial that will air during the Daytona 500 on Sunday.

The spot is called “Make a Name” and honors the Earnhardts’ long relationship with the tire maker. A.J. Croce covered his late father’s song, ‘I Got A Name,’ for the commercial, which depicts a young Earnhardt idolizing his father, growing into his own role as a racer, and now shifting in retirement to a job in television.

The Goodyear blimp will feature #MakeAName instead of its usual brand name at the Daytona 500, where Earnhardt is the grand marshal.

Earnhardt has always been careful about incorporating his father, a seven-time champion and Hall of Famer, into his own marketing. Earnhardt Sr. was killed in a crash on the final lap of the 2001 Daytona 500.

His son went on to win two Daytona 500s but retired at the end of last season because of a history of concussions. He’s now married, expecting his first child this spring, and transitioning into jobs outside the race car.

This Goodyear script was a winner for him, though, because he’s long felt a connection to the Croce song and because his family had such a strong relationship with the tire company. When Goodyear battled Hoosier in the brief tire war to hit NASCAR, Earnhardt Jr. said his father was one of only two drivers to remain loyal to Goodyear.

“I really try to stick with things that are told in a way that I am celebrating him, and Goodyear and his relationship with Goodyear was really strong when he was racing,” Earnhardt Jr. said. “I’ve always been mindful of people saying that I rode on his coattails. I’ve been aware of that my whole career and I don’t want people to think I’ve ever taken advantage of my last name, or done anything that my Daddy wouldn’t appreciate.

“I just go off of my gut feeling. If it feels weird or uncomfortable, or is not something I’m proud of, then I just don’t have to do it. I’m in a good financial position. I don’t need to be out there selling my father. He’s not mine to sell.”

Earnhardt was proud of the finished Goodyear spot, and he understands the importance of imagery and video in capturing the essence of his family. His sister’s children never had a relationship with Earnhardt Sr. Neither did his wife, and his unborn daughter will never know her grandfather.

“We have to try our best to paint this picture for them and one of the greatest examples of this is when Daddy showed me the Ralph Earnhardt footage,” Earnhardt said.

Seeing the material doesn’t bother Earnhardt. But he admitted that talking about his childhood, or recalling his father, can be difficult.

“I get emotional when I talk about it. I don’t get emotional when I watch it. When I sit down with Kelley and talk about our childhood or Dad, it always gets emotional. It always does,” he said. “It’s sad sometimes. When I have my daughter, it will be super sad thinking about Dad, wishing he could see what I was able to accomplish, the man I have become, having a child. I just would love if he could meet her and see what’s going on.”