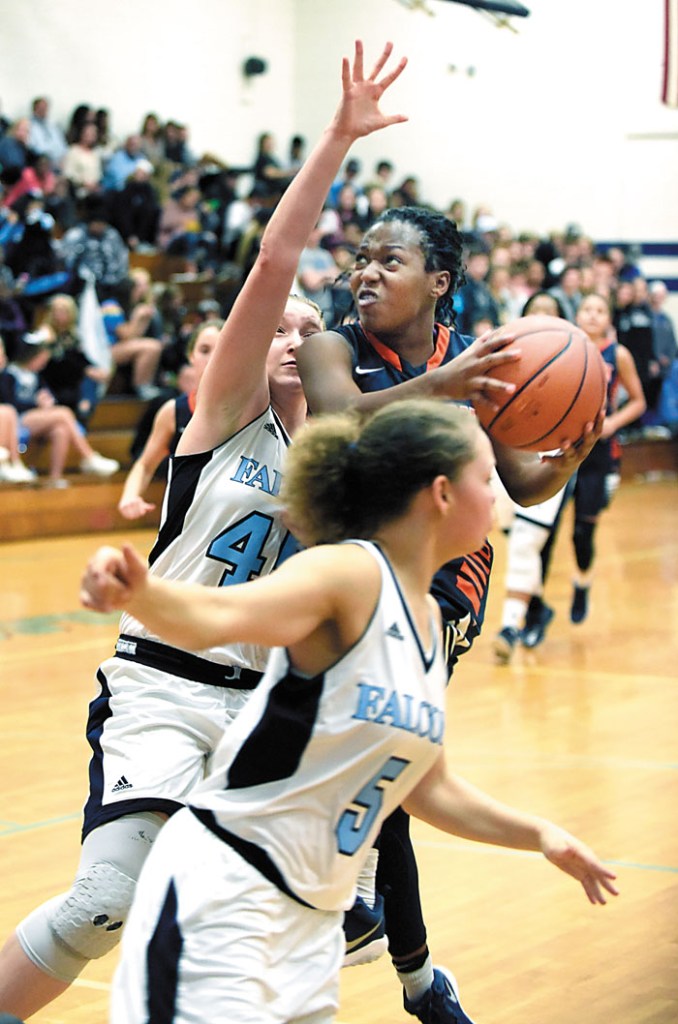 TROUTMAN — It took less than a quarter for Carson’s girls basketball team to show West Rowan who was boss Thursday night.

The Cougars scored the last 10 points of the opening period en route to a 62-32 victory — a rout that spring-boarded them into today’s 6 p.m. North Piedmont Conference Tournament championship game at South Iredell.

“I thought we had a really good first half,” said coach Brooke Stouder, shortly after second-seeded Carson (22-3) won its sixth straight game and earned a final-round berth opposite top-seeded North Iredell. “We got after every loose ball, did a good job defensively, got a lot of deflections and crashed the boards offensively. All those effort things were there. And for us, that was the difference in the game.”

The triumph was Carson’s fourth against West (19-7) this season and easily the most lopsided. The Cougars held 5-10 center Abigail Wilson to a season-low 11 points and the Falcons to 13 field goals. The 32 points was West’s lowest output of the year.

“There wasn’t much to like here,” said West coach Ashley Poole. “We planned and planned and had a great practice (Wednesday) night. Then we came here and didn’t execute what we had worked on. We were supposed to feed the post. Everybody knows that’s our game, but I hadn’t seen anybody that could stop it. We just didn’t give it to her.”

Instead, the Falcons suffered 18 turnovers and rarely got second-chance opportunities. With Wilson handcuffed inside, Carson’s pressure defense forced them out of their comfort zone.

“We practiced what we needed to practice,” said West junior Mary Sobataka. “We just weren’t able to accomplish it tonight. It was definitely a struggle because this isn’t a shooter’s gym. You have to adjust and we never really did.”

The Cougars seemed to. Their first-quarter scoring spurt morphed into a 23-2 feeding frenzy after Olivia Gabriel, McKenzie Gadson and freshman Ellie Wilhelm buried 3-pointers before the middle of the second quarter. Gabriel finished with a game-best 16 points while Wilhelm made three of Carson’s nine 3-balls and scored 10 points. By halftime, it owned a 30-13 lead.

“Yeah, but this game was won on defense,” said Gabriel, the 5-foot-5 dynamo who quarterbacked the offense. “Every time we play West, it’s about doubling down on the bigs. We wanted them to prove they could hit the outside shot. Carson basketball is about defense, rebounding and boxing out.”

The shot of the night came as the third quarter expired. Carson reserve Taylor Wiggins banked in a 16-foot set shot from the left side that provided a 49-26 edge and rendered the final period little more than a victory lap.

“It’s hard to beat a good team three times, much less four times,” Stouder said afterward. “We knew coming in to this, from the get-go we were going to have to play hard and do the little things right. And we did that.”

While West awaits news of a 3A state playoff berth, Carson will pursue its first conference tournament title. It fell twice to North Iredell (21-4) this season — 60-51 on Jan. 9 and 57-49 on Jan. 26. The Raiders have won three straight and nine of their last 10 games, including a 45-44 thriller against Statesville in Wednesday’s semifinal.

“I’m excited. I’m ready,” Gabriel beamed. “They’ve got the height advantage over us. We’ve got to get down on their bigs, run in transition and try to tire them out.”

Or as Stouder said, “Those weren’t two of our better games. But we’re at our best when we’re able to pressure people and make them feel uncomfortable. We just need to have another good night.”