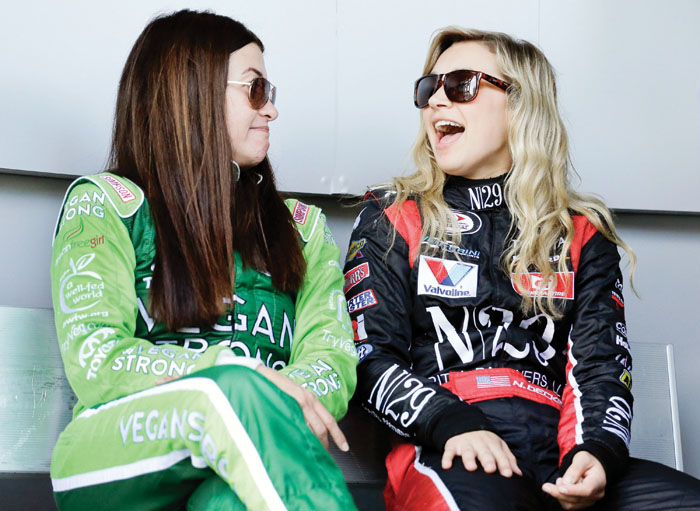 They wished each other luck in their respective races during the brief exchange.

Decker probably could have tossed in a hearty “thank you.”

Although Patrick’s NASCAR success never matched the attention she received for standing out in a male-dominated sport, her six-year stint in the Cup Series seemingly set the groundwork for other women to follow.

“There’s so many younger girls that are fast — they’re like 10 years old, 12 years old — and they’re racing everything and anything,” said the 19-year-old Decker, who started on the pole and finished fifth in the ARCA Series season opener at Daytona. “Dirt cars, go-karts, full-size cars already. They’re coming up and they’re going to be here faster than you know it.”

Probably not fast enough to avoid having an all-male Cup lineup in 2019.

But several female drivers believe Patrick will end up playing as prominent a role in NASCAR history as trailblazers Janet Guthrie and Shawna Robinson.

“Let’s face it: Racing has been a man’s sport for many, many years, and there’s been very few women that have ever made it to the top level,” said 43-year-old Leilani Munter, a part-time driver in the ARCA Series since 2010. “Of those, very few girls have actually had an opportunity to run full time. To get a win, you need to be out there on a regular basis. For me, the biggest challenge has always been finding sponsorship.”

That’s the case for every driver, regardless of gender, age or ethnicity.

A lack of sponsorship ultimately cost Patrick, once among the most marketable drivers in motorsports, her ride at Stewart-Haas Racing last season. Patrick, 35, is making her final NASCAR start at the Daytona 500 and will end her racing career altogether after returning to IndyCar and competing in the Indianapolis 500 in May.

“I think Danica being out there definitely has planted the seed in a lot of little girls across the country that are now thinking about becoming the next female NASCAR driver,” Munter said. “There’s going to be a lot more women coming into the sport.”

There are no women in the second-tier Xfinity Series this season, and 44-year-old Jennifer Jo Cobb is the only woman racing full time in the Truck Series.

Patrick’s legacy might be better measured years from now, long after people stop debating whether she even belonged in the Cup Series.

“There’s no doubt that she brought more eyes on NASCAR and continues to bring more eyes on NASCAR from maybe the typical stereotype, which is good,” said 2012 Cup Series champion Brad Keselowski, who credited Patrick for “clawing her way” to the top. “But then on the flip side, when you look at it from just a pure ‘Who’s the best racer in the world that doesn’t have a Cup ride that wants to have a Cup ride,’ those are the people that you hope kind of get the empty seats.

The question is: Who will be Danica 2.0?

The 2017-18 NASCAR Next class includes a female driver for the fourth consecutive year. Hailie Deegan, 16, is the youngest in the group, which is identified by a panel of industry insiders as the next wave of drivers with a chance at becoming NASCAR stars, and will challenge for rookie of the year honors in the West division of the NASCAR K&N Pro Series.

Patrick took a different path, making the jump to NASCAR after seven years and one victory in the open-wheel IndyCar Series.

Patrick said the “trickle-down effect” from her career “is what it is,” declining to delve too deep into her long-term impact on racing.

“You have to get a team behind you, to believe in you,” she said. “Maybe it’s a little harder because women have not proved themselves as much as men, but every driver has to prove themselves to their team, so there’s still that responsibility, and that challenge is still at hand for every single driver to find a group that believes in them and gives them what they need, puts them in the right scenario.”

While it’s unclear when the next female driver will make it to NASCAR’s biggest stage, there are encouraging numbers of women working in other areas. Munter had two women on her pit crew for the ARCA race, and two Monster Energy Cup teams have women in key positions. Andrea Mueller is a lead engineer at Penske Racing, and Alba Colon is director of competition systems at Hendrick Motorsports.

The more prominent role — the one Patrick has filled for six years — is missing. At least for now.

As part of his race-day duties, Jones will be introduced at the drivers’ meeting, take a lap around Daytona International Speedway in a parade car and participate in question-and-answer sessions with fans.

A native of nearby Pierson, Jones was voted into the Cooperstown class last month in his first year of eligibility. The eight-time all-star and 1999 National League MVP led the Atlanta Braves to three World Series appearances, including the 1995 championship.