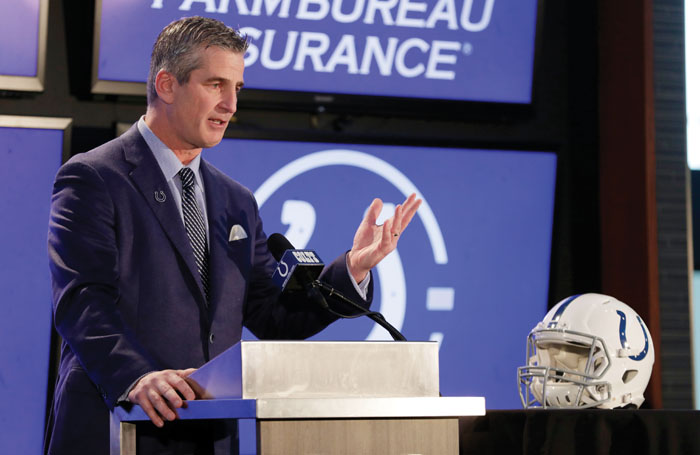 Indianapolis Colts head coach Frank Reich takes questions after he was introduced at the team's new had football coach during a press conference in Indianapolis, Tuesday, Feb. 13, 2018. (AP Photo/Michael Conroy)

By MICHAEL MAROT, AP Sports Writer
INDIANAPOLIS (AP) — Frank Reich did some of his most memorable work in relief.
He engineered the biggest comeback in NFL playoff history while pinch-hitting for Hall of Fame quarterback Jim Kelly. He orchestrated the second-largest comeback in college football history after spending three years as Boomer Esiason’s understudy. Heck, he even won a Super Bowl with a backup quarterback.
So when the Indianapolis Colts offered Reich a chance to be their second choice as head coach, the super sub figured it was the perfect it.
“The backup role has suited me well in my career,” Reich joked Tuesday at his introductory news conference at Lucas Oil Stadium.
Reich inherits a team that went 4-12 in 2017, missed the playoffs for the third straight year and was desperately trying to remove an embarrassing stain following last week’s announcement that New England Patriots offensive coordinator Josh McDaniels would not take the Colts’ job.
This time, team owner Jim Irsay made sure the Colts weren’t caught off-guard again. Shortly after team officials confirmed the deal Sunday, the team posted a photo on Twitter of Reich signing a five-year deal at Irsay’s house.
As it turns out, the Colts may have gotten a better fit with Reich anyway.
While general manager Chris Ballard acknowledged making a mistake by not including Reich on his original short list, Irsay went even further after former team president Bill Polian, former coach Tony Dungy and Peyton Manning all called with glowing endorsements about Reich.
“The more I think about it, the more I think how could you be so stupid and not see the clarity of it sooner?” Irsay said.
But Reich sure didn’t make it easy for the Colts or anyone else conducting a coaching search, instructing his agent not to bother him with interview requests as he prepared for the playoffs.
The result of going “dark” during both postseason bye weeks: Reich won a Super Bowl as the Eagles’ offensive coordinator and got the dream job from a team that gave him his first coaching break in 2006 as an intern.
Indy is getting a coach who is nearly the opposite of Chuck Pagano, who was fired just hours after the Colts’ regular-season finale.
Pagano arrived with a defensive pedigree and often cited the Ravens’ playoff loss after the 2011 season for being the reason he got the job. While Pagano, a cancer survivor, said all the right things during his six-year tenure, his last three seasons were marred by penalties, mistakes, inconsistency and an inability to close out games.
Reich, in contrast, has been a position coach with Manning and Phillip Rivers as well as Larry Fitzgerald and Reggie Wayne. Plus, he was in charge of the offense that turned Carson Wentz into an MVP front-runner and Nick Foles into a Super Bowl MVP.
The resume, and the Super Bowl win, were likely to make Reich one of the league’s hottest coaching candidates next year. But the McDaniels fiasco gave the Colts a second chance to get ahead of the curve — without anyone to compete against.
“Our vision matched in terms of people, the process of the way we wanted to play the game both on offense and defense and that’s not always the case,” Ballard said. “I’m not a coach anymore, but I do have a vision of how I think the team should play.”
Ballard didn’t even have to make a hard sales pitch.
He said Reich never asked about Andrew Luck’s health status, noting he only volunteered the medical background at the end of their discussion. Luck still hasn’t thrown a football since October and his rehab from a partially torn labrum will enter its 13th month next week, which was supposed to be the biggest uncertainty about Indy’s job.
Reich also met with the three assistant coaches hired for McDaniels’ staff and said he was impressed as much with them as he was by the Colts’ commitment to honor their contracts. He did not drop hints about any other hires though he did say he intends to call plays — something he did not do in Philadelphia.
What he does have is a four-pronged approach to the game that he expects the Colts to follow: Play with toughness, discipline, unity and deliver late knockout blows.
And he intends to show the Colts he should have been their first choice all along.
“I was not going to chase after anything, so when Josh decided not to take it, I did not call my agent. I was thinking ‘I hope they call, I really do. But if not, we’re going back to work,'” Reich said. “Actually, I’m hoping we get used to this (February schedule), coming off a Super Bowl and then playing catch-up with the rest of the league.”
___
More AP NFL: https://pro32.ap.org and https://twitter.com/AP_NFL