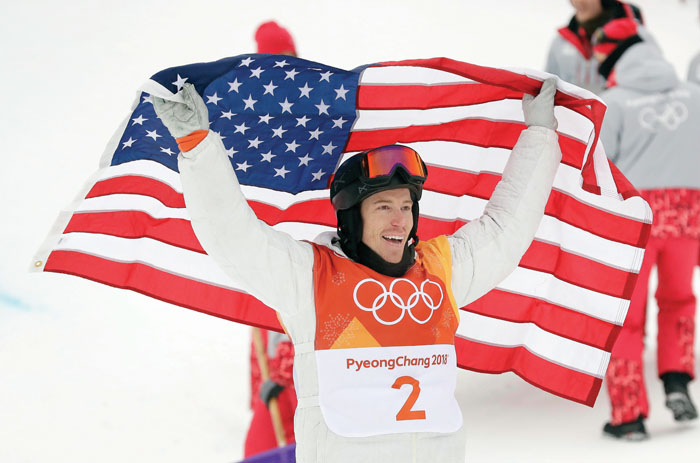 PYEONGCHANG, South Korea (AP) — The pressure was real. So were the tears — of joy, relief, redemption.

This is why Shaun White keeps going. This is why the snowboarding superstar keeps coming back to the Olympics, a journey that’s seen him evolve from teenage phenom to global brand to living legend. One with a perpetual target on his back and impossible expectations to meet.

Standing atop the halfpipe on a gray Wednesday morning at slushy Phoenix Snow Park with his hopes for a third gold down to one final shot. White never wavered.

The stakes left him little choice. Rising star and heir apparent Ayumu Hirano had snatched the lead out of White’s hand during the men’s halfpipe final, throwing a spectacular epic second run to vault into the lead and put a portion of White’s Olympic legacy at risk.

Not that it mattered.

One deep breath, a half-dozen near flawless tricks — including back-to-back 1440s, a trick he never landed in competition before these finals  — and one seemingly interminable wait later White’s return to the top of his sport was complete.

When his score of 97.75 flashed, more than two points clear of Hirano and almost six clear of Australian bronze medalist Scotty James, it all seemed worth it. The long road back from disappointment in Sochi four years ago. The painful recovery from a crash in New Zealand last fall that required emergency surgery. The notion the man who for so long served as a pioneer had been surpassed by the next generation.

“He wears the weight of the country and the world on his shoulders for this,” said J.J. Thomas, White’s longtime coach. “This is our Super Bowl. But bigger because it’s only once every four years and he stresses out.”

Funny, it didn’t show as he became the first American male to win gold at three separate Winter Olympics. Speedskater Bonnie Blair won gold in the 1988, 1992 and 1994 Games. The gold was also the 100th overall gold for the United States in the Winter Games.

“What can I say? I won the Olympics,” White said. “Three gold medals. I was just hoping they’d give it to me. I was pretty sure I put it down but it took a little while. Just trying not to make eye contact with the judges.”

James, White and Hirano traded electric runs during qualifying on Tuesday, “sending it” in snowboarding terms and sending a bit of a message in the process. The three have eyed this showdown on the world stage for months and Hirano — who edged James in the X Games last month, an event White opted to skip after locking down a spot on the U.S. Olympic Team — shrugged when asked if he was concerned about the 98.50 White put up on Tuesday to earn the right to go last in the finals.

“I know what he does and he knows what I do,” Ayumu said.

Namely, put on a show.

White put together a dazzling first run, throwing a 1440 early on and building from there. He tossed his helmet toward the crowd when he finished and celebrated in the waiting area while the judges deliberated. His score of 94.25 was tops after the first of the three finals runs, but Hirano recovered after sitting down during his first trip to put White on notice during the second.

The 19-year-old uncorked back-to-back 1440s of his own and when the crowd exploded as his 95.25 flashed, he simply shrugged his shoulders, unfazed by the stakes.

Hirano missed an opportunity to go even higher when he washed out on his final run. James put together an unspectacular last set, setting the stage for White. He called the opportunity to go last his “good luck spot.” And with good reason. He went last during his gold medal runs in Turin in 2006 and Vancouver in 2010.

Yet White had the top of the podium locked up during his last sprint down the pipe on both occasions. This moment required something more. And he delivered.

While the culture of snowboarding occasionally finds itself at odds with the competitive nature of the sport — James openly questioned the judging before the games and even said he’s “not huge on perfect scores” — White embraces it. His gold in Turin as a mop-topped 19-year-old helped launch him into a global brand. His repeat performance in Vancouver four years later, one he finished by stomping a “Double McTwist 1260” with gold already in hand, cemented his status as arguably the greatest ever in his sport.

This time around, it felt different.

White finished a disappointing fourth in Sochi, a loss that led him to do more than a fair amount of soul searching in the aftermath. His life became more complex as he tried to juggle his snowboarding career and the endless business opportunities it provided.

Injuries started to pile up. He arrived in South Korea with stitches in his mouth from that spill in New Zealand that still hadn’t fully dissolved.

In the interim, the sport that he defined went on without him. White found himself no longer inventing tricks so much as trying to master the pioneering acrobatics of others, including Hirano.

Labeled as snowboarding’s next big thing at 13, the 5-foot-2 Hirano is a twisting, flipping, boundary-pushing whirl hardly afraid at taking on his idol.

Just not ready, at least this time, to take him down.