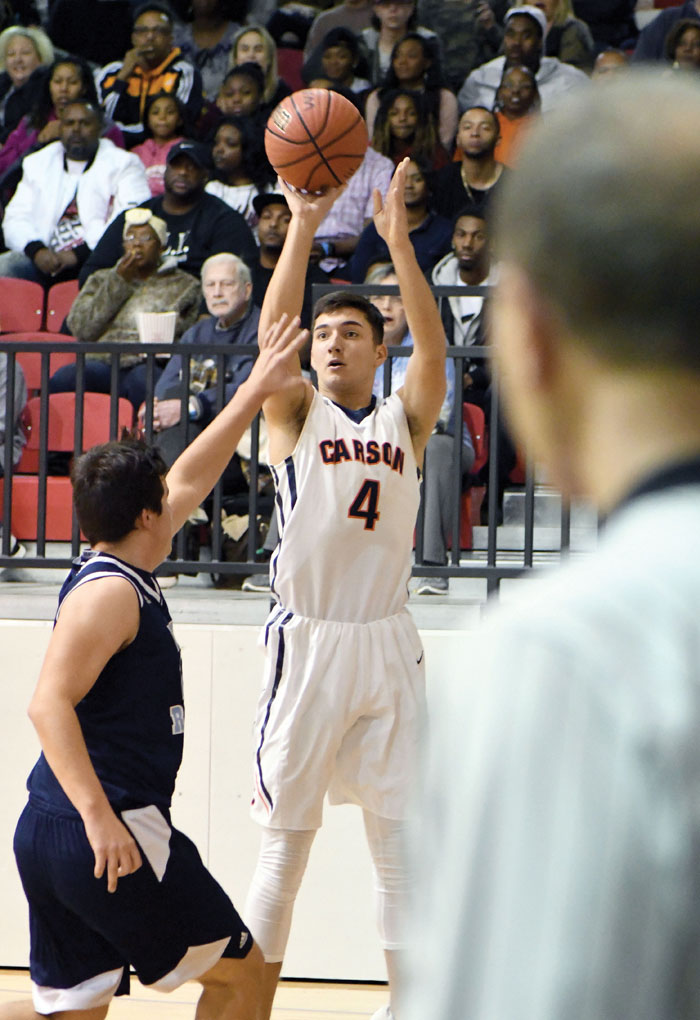 TROUTMAN — This was a reminder that not all victories will come handily for the high-flying Carson boys basketball team.

In fact, the Cougars tumbled down the stairs in Wednesday’s North Piedmont Conference Tournament semifinal against West Rowan — yet somehow landed on their feet.

“This one ended up being a dogfight right until the end,” coach Brian Perry said, at South Iredell High School, where Carson staggered to a 74-69 triumph and into Friday’s championship game. “It was good for us, good to play that kind of game. Games like that prepare you for what’s down the road. There’s going to be a playoff game somewhere that’s just like that.”

Carson (22-2) won its seventh straight and set a school record for victories in a season. It will meet the winner of tonight’s Statesville-South Iredell semifinal in Friday’s 8 p.m. title game.

“We’re chasing our third championship of the season,” said forward Jamarius Hairston. “We’ve got to be ready to battle — and way better than we were tonight.”

He’s right. The top-seeded Cougars advanced despite a cringe-worthy display of free throw shooting (14-for-25) and a defense that was more fish cakes than caviar.

“It’s always a blessing to win,” senior Owen White said. “But all we did was outscore them. And first of all, we’ve got to learn how to shoot free throws.”

West, meanwhile, gave the enthusiastic crowd more than its money’s worth. The Falcons (13-13) — now four-time losers against Carson — were like cockroaches, in a most complimentary way. They refused to die.

“We really worked hard tonight,” 6-8 senior Caleb Mauldin noted. “We didn’t come out with the win, but I’m proud of what we did, especially the bench players. They were knocking down threes down the stretch, keeping us close.”

Mauldin was limited to 12 points in Tuesday’s first-round win, but returned to form with a game-high 28 points. Included was the 2,000th of his varsity career, scored on a signature, head fake and layup with 4:35 remaining in the first half.

West came close, inching within four points following Mauldin’s burst-of-energy put-back with 10 seconds to play. But it spent most of night playing catch-up — and never did.

“It took a great team effort to play with a team as good as Carson,” said Falcons’ coach Mike Gurley. “Those kids are solid as rocks and it’s fun to compete against them. We made a conscious effort tonight. We wanted to play and play them for 32 minutes. In the first three games against them, there were moments when it got away from us and stayed away. We didn’t fight back.”

They did this time. Carson first took control in the opening quarter, when White banged in a pair of 3-balls and scored 10 of his 19 points. A 12-0 run in the second period — capped when Jailen Williams and Cole Perry combined for three fast-break layups in less than 30 seconds — helped the Cougars open a 39-21 lead.

West’s reply unfolded in the third quarter, when junior guard Zach Brawley drained consecutive 3-pointers to trim its deficit to 50-44. Moments later, Johnny Hassard ripped down an offensive rebound and made a layup before Brawley — who netted 15 of his career-high 17 points in the second half — turned a mid-court steal into a runaway layup that made it 52-48 with 58 seconds left in the period.

“Everyone was going hard,” Mauldin said. “That’s what we go by. We play as hard as we can and leave nothing behind.”

Yet for every charge West made up the hill, Carson had an answer. A short, pull-up jumper by Williams restored Carson’s double-digit lead with 3:11 to go and Perry’s rotating, axel-jump layup made it 70-59 with 2:49 on the clock. The Cougars hung on by converting four of eight free throws in the final 63 seconds — but not before Mauldin tore down an offensive rebound, fell to his back and flipped a pass to Brawley, who swished a jumper from inside the lane.

“I don’t know if we’re relieved, but we’re happy we won,” Coach Perry said afterward. “We’d read that they shot the ball real well against East (Rowan) and knew we’d have to play well defensively. We really didn’t. They got too much.”