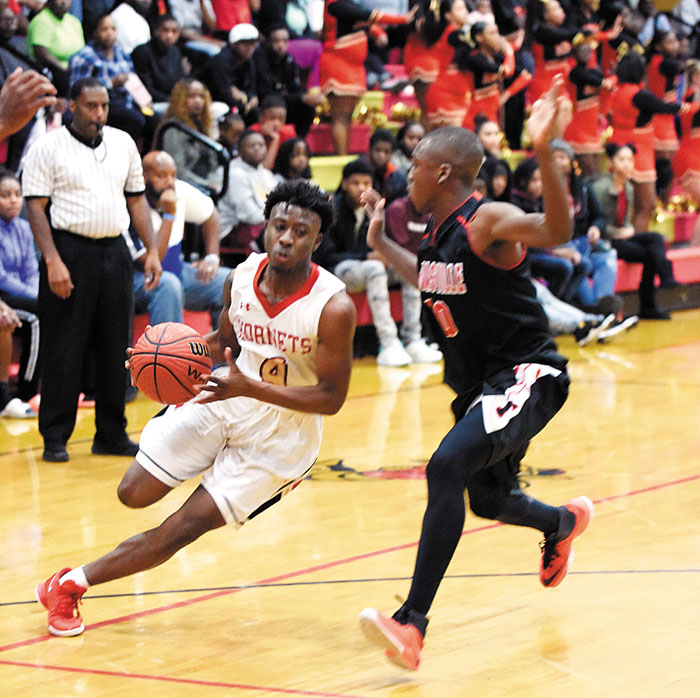 Salisbury had an answer.

With the opportunity to help itself in playoff positioning, Lexington got floored early and never fully recovered in a 96-80 loss to the Hornets in the Central Carolina Conference Tournament semifinals Wednesday at Ledford.

The 96 points were the most scored by Salisbury since they had 99 in a Christmas tournament romp against South Rowan in 2010.

Trell Baker pumped in 21 points for the Hornets and also had 10 assists and eight steals. Xavier Kesler and Elijah Moss tacked on 15 points each. Bill Fisher scored 14, and Cameron Gill had 10.

Salisbury, ranked sixth in 2A and the top seed in the tournament, moved to 23-2 and will play either Thomasville or North Davidson in the finals at 7:30 p.m. Friday at Ledford. This is the most wins for the Hornets since they were 28-2 in 2009.

Lexington, tied for third in the CCC standings and seeded fourth for the tournament, will now pull hard for arch-rival Thomasville in the semifinal with the Black Knights at 7:30 p.m. on  Thursday. If North loses that game, Lexington and North would play at 4:30 p.m. Friday to determine the league’s No. 3 seed for the 2A state playoffs.

None of that mattered Wednesday, as the Hornets flexed their muscle from the opening tip. Salisbury jumped out to a 13-4 lead, extended that to 24-10 late in the first quarter, and kept the Jackets at arm’s length the rest of the way.

Lexington coach Jon Weavil couldn’t quite figure that out. “We came out a tad bit lackadaisical, which we shouldn’t have,” he said. “We allowed them to open up that lead. But we fought back, we still had time. We cut it to four, and then we allowed them to get two run-outs, they hit a 3, got an and-one. So they’re back up 11, just like that. That kind of took a little wind out of our sails.”

The hot start was just what Salisbury coach Bryan Withers was hoping for, especially with his team playing without standout Oshaun Robinson, the team’s No. 3 scorer.

“I told our kids, even with our record, I don’t think people respect us enough,” Withers said. “I told them, Lexington has a lot to play for, so they’re gonna be hungry. They win this game, they may get third place, it puts them in a better situation for the playoffs. But, for us, we just have to play our game. We had a player out, for undisclosed reasons. But, he’ll be back. Next man had to step up.”

Every man seemed to step up for the Hornets. Five different Salisbury players scored in double figures, and the Hornets came at the Jackets in waves for 32 minutes. Lexington (14-10) was nearly up to the challenge, trailing 46-39 at the half and cutting that to 50-46 with 5:04 left in the third. But Moss canned a 3-pointer to steady the Hornets. That shot sparked a 10-0 Hornets run that essentially put the game away.