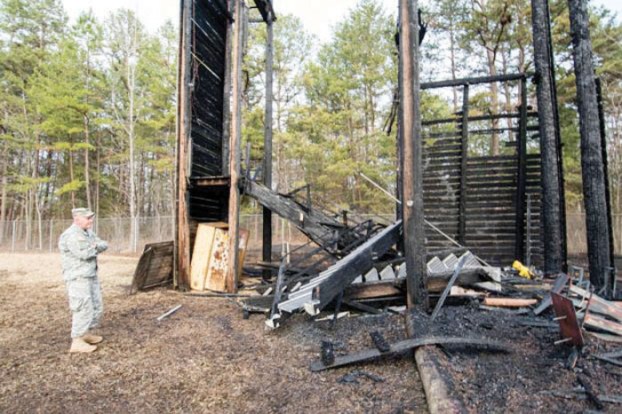 SALISBURY — It won’t be long until South Rowan High School JROTC cadets are conquering their fears and taking a leap — literally.

The Rowan-Salisbury Board of Education on Monday voted to replace the school’s rappel tower, which burned down in early January.

“I know normally we try not to take actions at work sessions but because this is something that’s used by multiple schools, we didn’t want to hold that process up any longer,” board Chairman Josh Wagner said.

Firefighters responded to the school shortly after midnight Jan. 10 after the tower mysteriously caught fire, but it was too late. The structure, a decades old JROTC tradition, went up in smoke.

“It is extremely, extremely important to this program,” Master Sgt. Tim Morris said.

South Rowan’s tower was one of only two in the county and stood on the school’s grounds for roughly 30 years.

“This has been almost like losing a child in a way.” Morris said. “… It was devastating when I found out it happened.”

The Landis Police Department is investigating the blaze, but the cause has not been determined.

“The good news is that we did have insurance on the structure,” Assistant Superintendent Anthony Vann said.

Provided that the new tower is of a similar design to the old structure, insurance should cover all costs for its replacements. Vann said the school system will file its claim once it receives construction bids. The district has already collected bids to demolish the ruins of the old tower. According to Vann, those bids had an average cost of $5,000 to $6,000.

In many ways, the old tower was the heart of South’s JROTC program — as integral to it as drills. Morris said climbing and then rappelling down the 40-foot structure was one of the first obstacles cadets conquered. It gave them confidence and the knowledge that they could conquer their fears and become something more, he said.

After the fire, cadets sent out a plea to the community, and the response, Morris said, has been incredible.

“Even if this was not covered by insurance, I think there was enough interest from former cadets and alumni and the community to make this happen one way or the other,” he said.

The Board of Education voted unanimously to approve reconstruction, with board member Richard Miller making the motion and Dean Hunter seconding it.

Hunter, who represents the South Rowan area, said he is glad the board was able to help.

“I’m glad we’re able to do it and help out,” he said. “I think it’s something that’s important to that school.”

Now that reconstruction has been given a thumbs up, Morris said students are looking forward to being the first to conquer the new tower.

“It really means a lot to them,” Morris said.

SALISBURY — If there can be a state-of-the-art ABC store, this might be it. “I’ll just say, ‘Cheers,'” Salisbury Mayor... read more