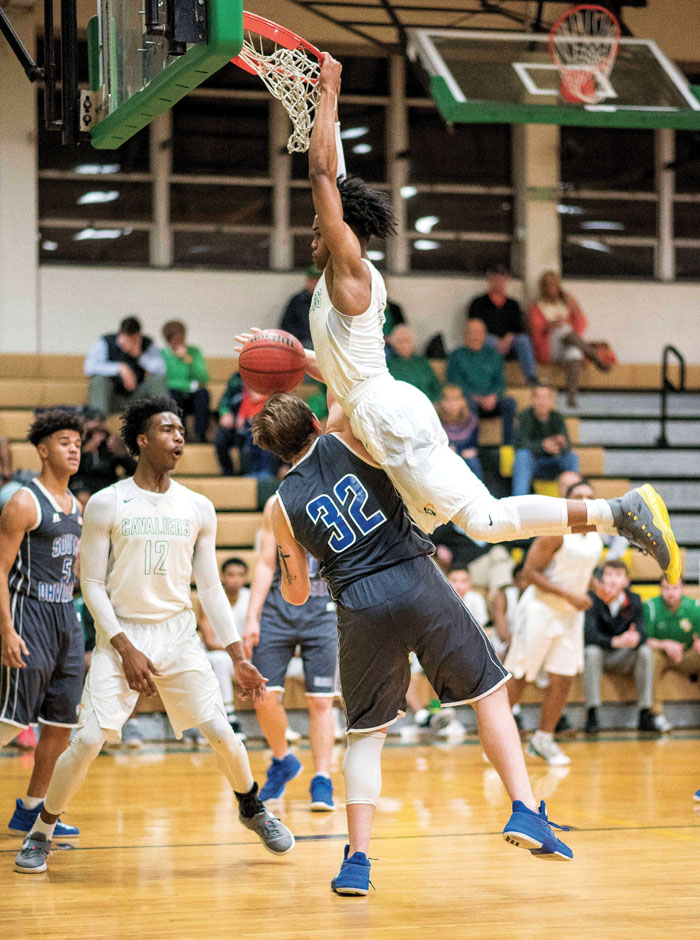 SPENCER — Veterans Dayjuwon Cooke and Brevin Goodlett dunked frequently, and when North Rowan freshmen Nick Colson and Javon Smith started scoring at will, the Cavaliers were headed to a crazy night.

Playing at home, second-seeded North routed South Davidson, 96-51, in the first round of the Yadkin Valley Conference Tournament on Tuesday. It was the most points scored by the Cavaliers (15-8) since they put up 99 in a 99-34 destruction of South Stanly in 2013.

“We really wanted 100,” said Goodlett, who had a fantastic jam off an inbounds lob for two of his 16 points. “Our bench almost got us there. But then that running clock started with about four minutes left, and it was over fast.”

The running-clock rule, approved by the NCHSAA in the spring of 2014, makes 100-point nights quite rare. The clocks runs continuously — even on free throws — when a team attains a 40-point lead in the second half. The idea is to prevent embarrassment, frustration and injury, and the rule served its purpose down the stretch in the North gym. Some hard fouls occurred late, and the sooner South Davidson could get on the bus, the better it was for all parties.

“Cooke and Goodlett did what they do pretty much every night, but this game was unusually rough, and it was just hard to ever get settled down,” North interim coach Bill Kesler said. “South Davidson had two or three intentional fouls and they also had two or three three technical fouls, and I thought our guys did a good job of keeping their cool and just walking away. We got knocked down hard on some layups.”

Cooke scored 21 to join Goodlett, Smith (17) and Colson (13) in double figures. Smith, who just came up from the jayvees, looks like he could be a big factor going forward.

“I was happy with how we played from the second quarter on,” Goodlett said. “We turned it up on defense and we attacked more.”

It was a surprisingly close game for 10 minutes. North led only 23-17 two minutes into the second quarter, and the seventh-seeded Wildcats (6-18) were competing on the boards and gaining confidence.

“They were hanging in there with us for a while,” North point guard Derrick Page said. “But then we started playing better team ball. I wasn’t trying to score myself, I was just trying to get the ball to our guys inside. I’d rather get 20 assists than 20 points any day.”

North would score 30 in that second quarter and sprinted to halftime with a comfortable 48-28 lead. David Broaddus, a backup guard, provided energy as the Cavaliers built their lead.

“We had a very slow start,” Cooke said. “But our bench picked us up. Then we got our running game going.”

Goodlett opened the second half with a put-back, Dajuan Clement stroked a 3-pointer, and then Cooke jammed the rebound when Goodlett missed inside. After North ran a play for Goodlett’s resounding dunk, it was 67-34 with 3:30 left in the third quarter.

North’s lead was 93-49 with 3:46 left to play. Getting 100 still looked like a good bet at that point because North has talented reserves. Logan Stoner scored eight in a hurry.

Tougher games are in North’s future. Probably all the rest of them will be challenging, starting with an 8:30 p.m. semifinal against third-seeded Albemarle on Thursday at Pfeiffer’s Merner Gym.

After the tournament, North will have at least one home game in the state playoffs. The Cavaliers are unranked but reasonably dangerous. Five of their eight losses have been to 2A Salisbury and YVC champ North Stanly. They are 6-1 since Kesler took the reins, with a two-point loss to Salisbury.

“The thing about 1A basketball now is that you’ve got a lot of those prep schools and charter schools at the top,” Kesler said. “I think some of those schools have about 60 students, but 15 of them just happen to be great basketball players. They probably should be competing for a different championship than we are, but we’re going to do all we can.”