In a fog: Scene reminiscent of scissor-cut folk art 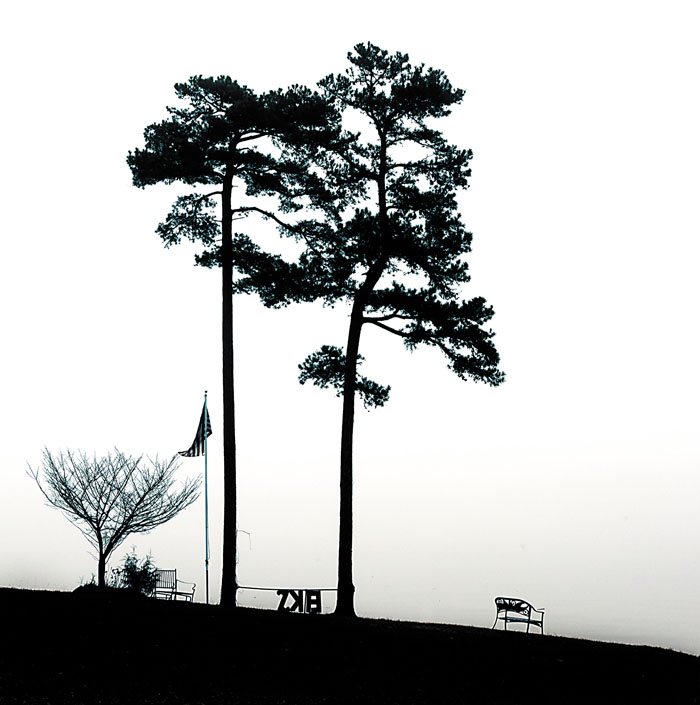 Wayne Hinshaw / for the Salisbury Post On a foggy Saturday at High Rock Lake, the fog was so heavy that you could not see beyond what was close in front of you. The water was not even visible nor was the treeline or the homes across the lake.

The heavy fog that covered the Polar Plunge on Saturday created a surreal feeling of being captured in a giant low-flying cloud. It was like a white blanket was tossed over me standing on the banks of High Rock Lake.

I could feel the wetness on my face, but when I reached out to touch it, there was nothing there. I could see the fog, but it kept me from seeing anything. It hides everything downstream from me. It is like it has quietly creeped all around everything, blocking the view of the trees down the river. The houses vanished in wet air. Are we to be prisoners locked in the fog? It seems so mysterious hiding so many secrets.

Standing on the bank, I could see only the two pine trees, two benches, a flag pole and a leafless tree on the edge of the water. There was nothing beyond to be seen on this day.

Taking a photo of the scene before me presented me with a stark image of black figures against a white fog background. The silhouette reminds me of the folk art of “scissor cut” paper designs.

For me, the silhouette photo was simple, expose for the background which was bright white fog, and the figures would be black.

I made a photo that looked like the earliest paper cuttings created by the Chinese artists after they had first invented paper and learned to cut faceless designs and patterns by hand. Their art was carried across Asia to Europe where the German, the Dutch and the Swiss continued scissor cutting designs of silhouettes, valentines and love letters in paper. By the 18th century, the folk art was brought to America. The Germans called it “Sherenschnitte” meaning scissors cuts.

On this heavy foggy day, I have created, quite simply, my own “Sherenschnitte” in the camera without paper or scissors. I believe the hand-cut version requires more skill than what I did. I can only copy their work.