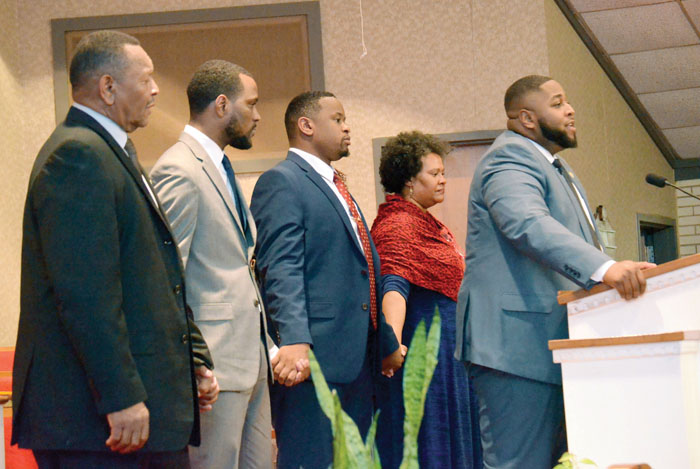 SALISBURY — The NAACP is the nation’s oldest, largest and most widely recognized civil rights organization and today, the organization turns 109. A crowd made up of local community leaders, law enforcement, educators, and citizens celebrated the occasion Sunday at Gethsemane Missionary Baptist Church.

“We are gathered to pay homage to the parent body of the NAACP and those responsible for the rebirth of the local NAACP,” said Yolanda Woods, second vice president of the Salisbury-Rowan Branch of the NAACP.

“When you’ve been in the struggle for 109 years, somebody should throw you a party, so we did,” said Chris Sharpe, the organization’s first vice president.

Guest Speaker Terrell Richardson, president of Livingstone College’s Student Government Association, rallied everyone to remember the founders of the organization who paved the way for the current leaders’ opportunities.

Richardson titled his message, “Lift Every Voice,” saying, “We wouldn’t be here if it had not been for someone lifting their voice.”

He recounted the Bible story of Rizpah, the concubine of King Saul, who showed courage and devotion even in the face of her son’s deaths.

Richardson said just because their physical bodies were no longer there didn’t mean their bones didn’t continue to tell a story.

He called out the names of African Americans — Trayvon Martin, Sandra Bland, Michael Brown, Keith Lamont Scott and Tamir Rice who’ve died in the last several years, some of whom died in police-involved shootings.

“Make sure their bones tell a story,” Richardson said.

Richardson named notable civil rights activists and leaders like Stokely Carmichael, Dorothy Height, Martin Luther King Jr., who paved the way for leaders like Gemale Black to become one of the youngest NAACP branch presidents, and others like Elizabeth Duncan Koontz and the city’s first African-American woman Mayor, Al Heggins.

“If it were not for our forefathers and mothers, we would not be standing here today,” Black said.

He thanked everyone in attendance.

“The struggle is real, but it is not over,” Black said.

Black said his attention and that of the board has been to not just focus on issues of injustice, but also societal issues like feeding the hungry and giving to the community.

Amos McClorey, NAACP District 3 director, spoke briefly at the close of the service saying the organization is in business until everyone in the country is treated fairly.

“We encourage the community to come support us,” said the Rev. Marcus Fairley, following the event.

Fairley said membership is the most powerful way to support the organization.

The Salisbury-Rowan Branch of the NAACP meets at 6 p.m. the first Thursday of each month at Gethsemane Missionary Baptist Church, 719 S. Caldwell St.

In a fog: Scene reminiscent of scissor-cut folk art