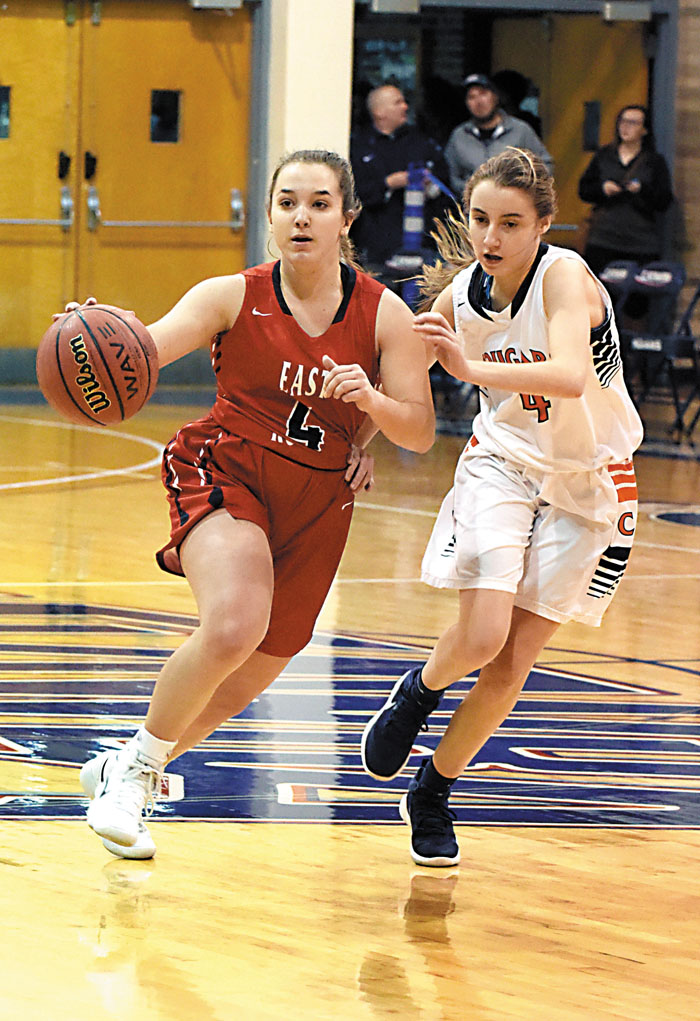 Wayne Hinshaw / Salisbury Post file photo East’s Hollie Harrison takes the ball up the court as Carson’s Ellie Wilhelm defends during a game on Dec. 28, 2017. Harrison has signed to continue her basketball career at Guilford College.

GRANITE QUARRY — Hollie Harrison scored 23 points — for the entire varsity season — when she was a sophomore at East Rowan.

At that point, her dream of playing college basketball seemed like wishful thinking, but the senior guard has fulfilled her mission. She’ll continue not only her education but her basketball career at Guilford College, a Division III school in Greensboro. She recently made things official with the Quakers.

“Playing college basketball always was my No. 1 goal, and now it’s worked out,” Harrison said. “I’m so glad it happened.”

Harrison played behind talented players as a sophomore when East still had Shenell Pharr, Shenique Pharr and Jocelyn Lowe in the backcourt. East started almost from scratch with a depleted roster Harrison’s junior year and also had a new head coach in Kevin Holland.

“We had seniors my sophomore year, so I didn’t get much playing time,” Harrison said. “But I put in a lot of work on my game in the offseason to try to change that as a junior.”

The 5-foot-4 Harrison’s relentless dedication made an impression on Holland right away.

“She was always there, from that first day of workouts, she was there,” Holland said. “And that’s always been the case. Offseason, preseason, during the season, she’s never missed anything. She just naturally grew into a leadership role for this team.”

Harrison took ownership of a rebuilding squad. She was the one sending the text messages, making sure teammates knew when they were practicing, what they would be wearing, where they would be eating.

Harrison was a co-captain as a junior, possibly making her the first junior captain in history who had averaged 0.9 points per game. She accepted the role and ran with it, providing direction and hope for a team that was almost always overmatched in experience, talent, size and depth.  Somehow East won four games, including a county win against North Rowan in the Christmas tournament and a league win in the South Piedmont Conference against Northwest Cabarrus.

Harrison scored 3.5 points per game, including a 17-point outburst against West Rowan late in the season.

“We fought games out,” Harrison said. “We never quit.”

As a senior, Harrison has continued to move forward as a player and has averaged 7 points, 4 rebounds and 2 assists. East is 5-19, but Harrison has scored in double figures eight times. She scored a season-high 16 in a 66-56 loss to West Stanly, a December game in which her younger sister, Adalie, a sophomore, also scored 16.

“It’s been fun playing with my sister,” Hollie said. “Sure, we have our arguments, but we get over it. Being teammates has made us closer.”

It’s been a tough, injury-plagued season for East, especially since North Piedmont Conference play started in January. The six-team NPC has two of the top 10 teams in 3A, two more very good teams, and a fifth-place team in South Iredell that could be a third-place team in some 3A leagues. East’s closest league game has been a 12-point loss, but the  short-handed Mustangs have rarely stopped competing to their limit. Hollie, a captain again this season, has had a lot to do with East staying together and staying after it even when faced with hopeless matchups.

She believes East’s best game was against Central Cabarrus at home. Down 17 heading to the fourth quarter, East lost by six against a team that went on to be co-champion of the South Piedmont Conference. That’s the sort of tenacity the Mustangs have displayed. Holland has pushed Harrison hard to lead that fight.

“I’ve been harder on Hollie than I have anyone,” Holland said. “Because I know she’s tough and I know she can take it all  in stride. She can always let it go when the practice or the game is over, and then we can joke around about it.”

Harrison started visiting schools and contacting schools back in the fall, looking for the right fit for college. Guilford was a place that had the things she was looking for, including exercise science, her preferred major. She was accepted by Guilford, which has a great academic reputation, and she was delighted when Guilford coaches attended East games to watch her play.

“Guilford was at the very top of her list all along,” Holland said. “It helped her that she’s an excellent student. I had her in class last year, so I’ve seen how conscientious she is in the classroom.”

East has a proud history of players excelling in Division III basketball.

Amani Ajayi is currently scoring twice as many points for Averett as she ever did for East.

Tracy Croner, a solid player at East, blossomed into a 1,000-point scorer at Guilford.

Brittany Cornelius, a really good player at East, was so dynamic and dominant at Meredith that she was named to the USA South Conference’s 50th anniversary team.

Maybe Hollie Harrison will be the next Mustang on that list.

Harrison’s high school career is likely to conclude tonight when East takes on West Rowan in the first round of the North Piedmont Conference Tournament at South Iredell at 7:30 p.m. East will battle, but it already has lost to West and its powerful post players, 80-45 and 76-39.

If it is her last game for the Mustangs, Harrison will do her best to make it memorable. She’s been as committed to her team as anyone Holland has ever coached.

“As far as the basketball part of things, I believe we can replace Hollie’s points and rebounds next year,” Holland said. “But as far as finding someone that this team means everything to, that’s going to be a bigger challenge.”