The paradigm shifts to pink: Record number of women to seek public office in 2018 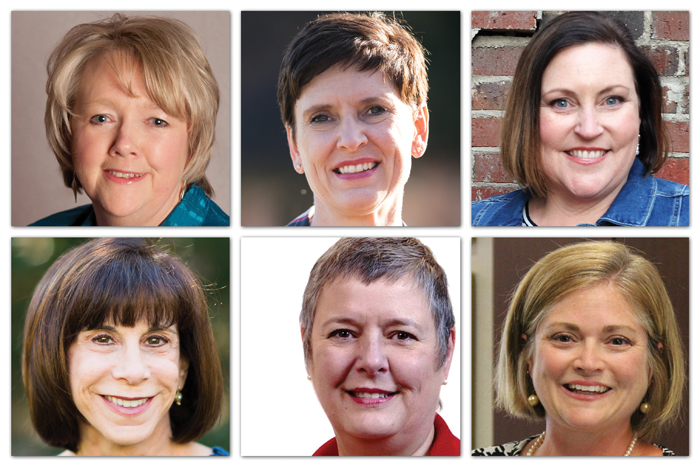 Senah Andrews said her ‘aha!’ moment to run for public office came in the middle of a rainstorm.

She was alone, hiking and halfway up a mountain some 1,500 miles away from her home in Concord.

The goal was not to scale any particular peak or walk a set number of miles. Instead, Andrews’ journey came in an effort to help her process her newly empty nest.

Up until that moment, Andrews said her life had been structured around those for whom she was caring. But her youngest son had left for college just days before she made her trek, and Andrews said it was time to plan: what was she doing next?

Then came the rain and with it, a revelation.

“I realized in that moment I could do anything,” Andrews said.

It would take a few months for that vision of ‘anything’ to translate into ‘run for North Carolina’s House District 83.’ Now, Andrews is doing just that.

Andrews, an educator and psychologist, is part of a growing number of campaigning women across the United States. According to the Rutgers’ Center for American Women and Politics, over 600 women have either filed or plan to file for federal or statewide elected offices in 2018.

In local legislative races, the number of women candidates could be even higher. Registrations to websites offering resources for women seeking public office are reaching astounding new heights.

According to Downey, this number is unprecedented.

In North Carolina, only 25.3 percent of 170 state senators and representatives are women. This number ranks our state at 26 when compared to others: 15.8 points behind Arizona and 14.2 points ahead of Wyoming.

Gail Young, a candidate for the General Assembly in House District 83, said this male-heavy legislature was a matter of opportunity.

The number of women pressing these proverbial levers appears to be on the rise. Rutgers has reported a record number of female candidacies, with the official filing period yet to begin.

“Women are deciding to live differently and to lean into roles that are more expansive than we have in the past,” said Andrews.

For Andrews and other women candidates across the state, this decision came in light of the 2016 election.

Terri LeGrand, currently campaigning for N.C. House District 74, said the election served as a wake up call: she could no longer rely on anyone else to carry the banner for her.

“In order to create real and lasting change, I was going to have to get out there and do it myself,” she said.

Many echo LeGrand’s sentiment. Kathy Manning, a congressional hopeful for North Carolina’s 13th District, said she was inspired to run after watching congress try to repeal healthcare laws that protected many.

Judy Klusman, a Rowan County commissioner running for re-election this year, said she was first inspired to enter public office after watching legislators lobby for laws that would hurt her family business: a farm.

“I think we’re seeing an outpouring of women because they feel that it’s really time for them get involved,” said Klusman.

The message rings clear. Women have had enough with silence. They’re ready to be heard and to bring about lasting, systemic impact.

“You can talk about what should happen, but until you’re actually a voice at the table nothing is likely to change,” said Young.

According to Rutgers, the political climate of 2018 has created a perfect opportunity for women to earn these seats. The institute’s researchers compared 2018 to 1992, the ‘Year of the Woman,’ wherein a then-record number of women ran and won.

A perfect storm for female victories is based on three factors: the number of their candidacies, the number of open seats and the malfeasance of their male counterparts.

Congressional candidacies by women have already been launched for 43 of these seats: three in the Senate and 43 in the House.

Also in 1992, women were inspired to run following the Senate Judiciary Committee’s dismissive treatment of Anita Hill, who testified that she had been sexually harassed by Clarence Thomas. Reports of sexual harassment and assault have been constant through 2017.

Rutgers credits this volatile political climate for the success of 30 percent of Democratic women challengers in Virginia’s 2017 election. Incumbents win in 90 percent of cases, but Virginia’s dramatic shift shows women are making and winning their cases for change.

Six months after that defining moment on the trails of Big Bend National Park, Senah Andrews remains busy navigating her new path toward Raleigh and the North Carolina General Assembly.

She’s joined now not by an anonymous swarm, but by a growing community of support. Both she and LeGrand are active members of a Facebook messaging group they call “Women Taking Back the State.”

The group offers members chances to share struggles and celebrate successes along their campaigns.

“The biggest common denominator is we’re all doing this for the first time,” said LeGrand. “There’s a tremendous learning curve. We’re all juggling family responsibilities, juggling jobs and running a campaign for the first time.”

Recently, the group offered comfort to Christy Clark, who is running for N.C. House District 98. Impending district changes had the potential to disqualify her from the race.

She was already planning to find another woman to take her place and to shift her focus to campaign managing.

“Christy, please come manage us!” said Andrews in the chat. “We’ll pay you, fight with you to win back the NCGA. Girl power!”

Clark is still in the running following the Supreme Court’s rejection of the special master’s redrawn districts in Mecklenburg and Wake counties. But the interchange illustrates one strength in the new wave of candidates: their heart for others.

“We are wired for relationships,” said Young. “We build compromise. We try to jointly design so that we meet all interests. I think women have less competition and more collaboration in their approach.”

It’s this wiring that seems to be banding more and more women together on their forays into the political arena.

Andrews credited this influx to national movements like “Me too,” moments that brought many together as a collective voice.

No longer are women not enough or unequal, she said. They are empowered and ready to take on the world.

“This isn’t simply a knee-jerk reaction out of anger,” said Andrews. “… (T)here is frustration and anger in there, but I also think there’s growth and nurturing and support for each other that’s growing (the movement) as well. This group is going to change history.”