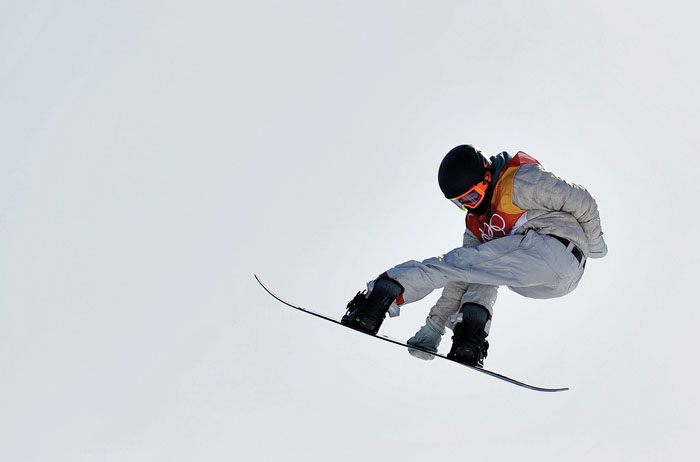 PYEONGCHANG, South Korea (AP) — Red Gerard and his brothers built their own snowboarding features park in the backyard of their Colorado home as kids, one that provided them a gateway into a sport that is an equal mix of technical precision and daring creativity.

Halfway across the world from his makeshift beginnings, the teenager made the Olympic stage look like just another afternoon back in Silverthorne, Colorado.

The 17-year-old won gold in men’s slopestyle snowboarding on Sunday, drilling his final run to put up a score of 87.16, good enough to edge Canadians Max Parrot and Mark McMorris and give the United States its first gold medal at the Pyeongchang Games.

“It’s a little bit hard to believe, that’s for sure,” Gerard said. “I’m just absolutely just mind-blown. I can’t believe everything worked out.”

Gerard stumbled his way through his opening two runs at tricky, windy and sun-splashed Phoenix Snow Park. It hardly mattered.

He found the line and the rhythm he was missing his third time down the mountain, using some of the techniques he first learned in his backyard to navigate the series of rails at the top before soaring through the moonscape at the bottom.

“I think I was just a little bit nervous (at first),” Gerard said. “I was just like, ‘I came all the way out here, I was just trying to land a run most of all.’”

He didn’t just land it, he stomped it, finishing with a backside triple cork — three twists and a flip — to the delight of his father, Conrad, and the other 17 family members and friends who followed him to South Korea.

“I don’t understand all the tricks he does,” Conrad Gerard said. “I asked my boys, was that good? They said, ‘Yeah, it’s good.’”

Gerard exulted in the moment as he took a few minutes to chat with International Olympic Committee President Thomas Bach.

“(Bach) was like, ‘What were you thinking during all those spins?’” Gerard said. “And I was like, ‘I just want to land a run, that’s about it.’ He was kind of joking around.”

Gerard, who lived in the Cleveland, Ohio, area early in his life before his family moved to Colorado when he was 7, stood at the bottom of the hill to see if anyone in the rest of the field could catch him.

They couldn’t. Not this time.

McMorris, a bronze medalist when slopestyle made its Olympic debut in Sochi four years ago, put up an 85.20 during his second run but under-rotated during the last jump of his final landing.

Norwegians Staale Sandbech and Markus Kleveland slipped up during their last shots, too, leaving only Parrot in Gerard’s way.

Parrot topped qualifying on Saturday, just as he did in Sochi as a 19-year-old before sliding to fifth in the finals. Parrot washed out in his first two runs on Sunday, failing to post a score anywhere close to podium-worthy. He collected himself during the short break between the second and third runs and put together a solid set. He made a brief fist-pump after landing and exchanging high-fives with Gerard in a sport that’s built less on competition and more on camaraderie.

Gerard, Parrot and McMorris stood near one another waiting for Parrot’s score to post. When the videoboard flashed 86.00, Gerard celebrated becoming the youngest American snowboarder to win Olympic gold. He’s also the second straight American to win the event, which made its Olympic debut in 2014. Sage Kotsenburg claimed the top spot in Sochi.

McMorris’ second bronze medal came less than 12 months removed from a harrowing free-riding accident that left him with a litany of injuries and threatened to put his career at risk.

Gerard, Parrot and McMorris will have a chance to win another medal when Big Air makes its first Olympics appearance later in the games. That’s heady territory for Gerard, a kid who grew up not aiming for Olympic glory but just a chance to shred.

“I just didn’t think I knew what the Olympics is (as a kid),” Gerard said. “I just kind of grew up watching Dew Tour and X Games. I never really realized how big it is.”