“Rowan at Work” exhibit on display at Rowan Museum 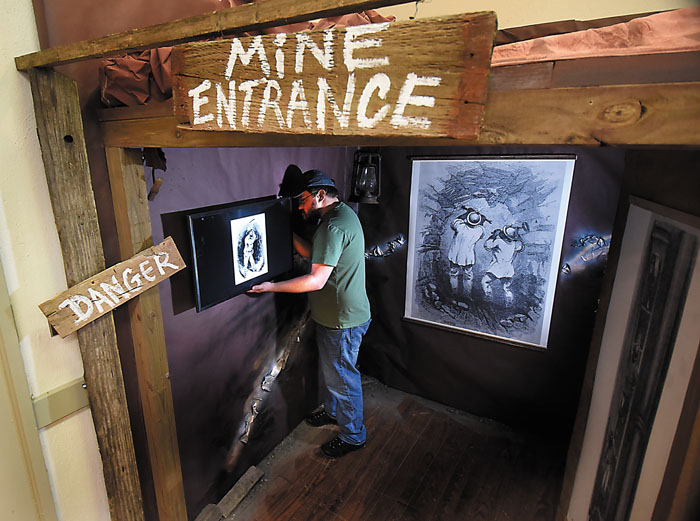 Wayne Hinshaw / for the Salisbury Post Aaron Kepley works on the ‘In the Gold Mine’ exhibit. The Rowan Museum exhibit has created the effect of walking into a gold mine with photos and displays from Gold Hill’s mining days. The exhibit ‘Rowan at Work’ showcases businesses and occupations from the 18th and 19th centuries in Rowan County.

SALISBURY — Ever wondered how Rowan County citizens performed job tasks, traveled and lived during the 18th and the 19th centuries? The Rowan Museum invites anyone to take a walk through Rowan County with its latest exhibit “Rowan at Work.”

The exhibit, which is now on display, was conceptualized five years ago to include life in Salisbury, Gold Hill, and other parts of Rowan County. Admission to the exhibit and the museum, located at 202 N. Main St., is free.

The exhibit includes a display of cotton farming in Rowan County and the tools that would’ve been used to maintain a Rowan farm. Mining in Gold Hill is also part of the exhibit.

In the 1800s, Gold Hill was the major city in this area, Kepley said, remarking how the Charlotte mayor during that time said he hoped one day his city would be as big at Gold Hill.

Rowan Museum Executive Director Aaron Kepley and Terry Holt, president of the museum’s board of directors, along with a few others, finished tidying up the exhibit.

“We usually have a five-year standing plan,” Holt said of exhibits.

The exhibits usually promote a particular theme or something the museum wants to emphasize. This year is the year of art and agriculture.

Many of the items were donated by citizens through word-of-mouth and some who’ve seen exhibits and realized someone in their family had a particular item. Holt said they are thankful to Clyde who has donated many items to the exhibits from his collection.

“Our mission is to find is to find the history of Rowan County and share it,” Holt said.

The exhibit will be on display through December.

Polar Plunge: taking a dip for a good cause