Polar Plunge: taking a dip for a good cause 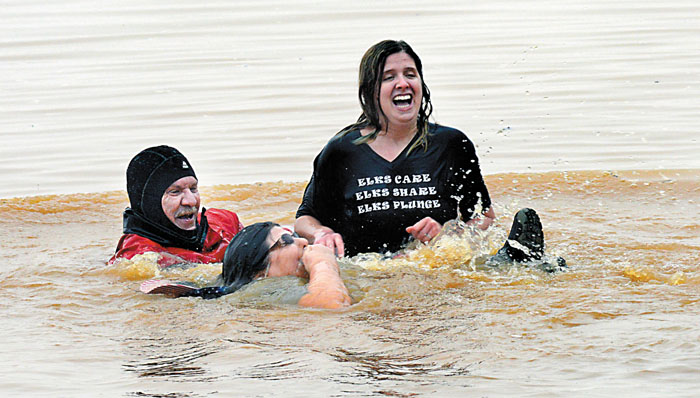 It was the first time the two participated in the chilly fundraiser, which benefits Rowan County Special Olympics. The temperature in the water during the 1 p.m. plunge was 46 degrees. Not all of the participants wore costumes, but they all wore smiles.

“This will be a father and son tradition,” Jaap said.

He said when he and his son thought about their costume they liked the idea of gladiators who go into battle just like they’d planned to battle the cold water.

Jason said he really wanted it to be something he could do with his son and raise money for a good cause. He heard about it through WSAT radio and the newspaper.

Mark Curran, president of the Salisbury Civitan Club summed up the event saying, “We have about 30 people who are jumping into freezing cold water to benefit other people.”

Curran plunged on behalf of the entire club. The Special Olympics is one of the primary partners of Civitan International and the Rowan County chapter benefits from of all funds raised at the event.

Special Olympics coordinator Jesse Byrd said they hope to raise enough money for each athlete to not have to pay. He said there are typically about 400 athletes who participate.

Barbara Harper, an instructor at Rowan-Cabarrus Community College, has participated in the Polar Plunge for the third time.

“I love seeing how Special Olympics helps with my students. It helps them connect,” Harper said.

Kenny and Debbie Martin plunged with fellow members of the Salisbury Elks Lodge. Kenny, a member of the local U.S. Army Reserves, plunged along with 15 other members of the lodge.

“It’s a great community event for a very worthy cause,” Kenny said.

Jessica Taylor, whose father, Jay coordinates the SOAR program, participated for the first time. She and her sisters, Joey, 14, and Jaiden, 10, all took the plunge along with their dad.

The 13-year-old has always had dance recitals around the time of the event and never had the chance to join.

She said she thought it would be a fun event to take part in and her dad had asked her to participate.

Mean Mug coffee shop owner Evelyn Medina has sold coffee at the event for the last three years. She then turns around and donates the proceeds to the Rowan Special Olympics. Her brother, Harold, has participated in the Special Olympics since he was nine.

“He still participates. He’s 51. It’s coming full circle. To give something back is near and dear to my heart,” Medina said.

Daniel Robinson, an intern with the Salisbury Parks and Recreation’s therapeutic programs, joined the plunge for the first time.

“It means everything. It’s what I’ve been working on in school. And I love to give back. A lot of people tend to forget people who need help,” Robinson said.