Patrick arrives in Daytona for first stop of ‘Danica Double’ 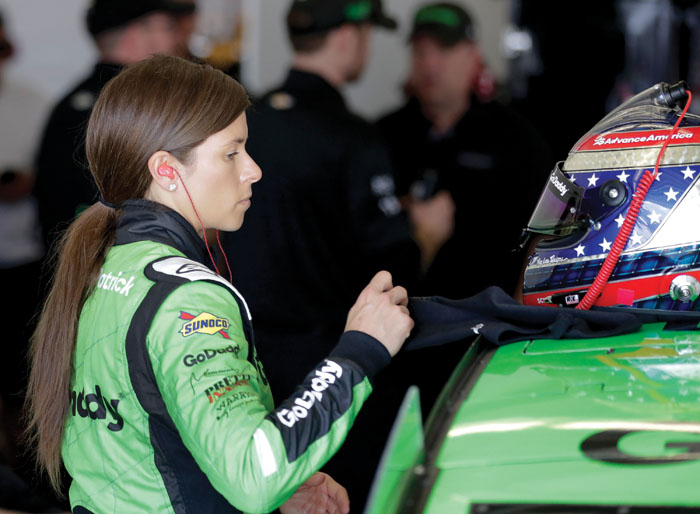 DAYTONA BEACH, Fla. (AP) — Danica Patrick watched drivers turn laps out of the corner of her eye. In her whirlwind preparation for the “Danica Double,” getting a car ready for the first event of the NASCAR season had not been a priority.

But with practice running for Sunday’s exhibition race at Daytona International Speedway — an event Patrick would have been eligible to enter if she had a car — the highest-finishing woman in Daytona 500 history could only follow along on a TV monitor.

“It all came together too late,” she said Saturday. “A couple of days ago I was thinking to myself that we should have run the backup car in the (exhibition). … I was like, ‘Man, where was I on that one?’ I didn’t think of it soon enough. It would have been good practice.”

Patrick is retiring after she races in both NASCAR’s Feb. 18 season-opening Daytona 500 and the Indianapolis 500 in May.

After a speaking engagement in Grand Cayman, she pulled through the speedway gates for her first stop on a two-race farewell tour. She finally got in her Daytona 500 car Saturday afternoon and briefly led a practice session before settling into 16th for the day.

This offseason, Patrick has been the big headline in auto racing, as has often been the case through the years.

First, she announced her retirement plans, then the end of her five-year relationship with NASCAR driver Ricky Stenhouse Jr. She published a wellness book and revealed she’s now dating Green Bay Packers quarterback Aaron Rodgers, who will be at the Daytona 500.

“He’s going to be here to support me and he’s excited,” Patrick told The Associated Press. “I’m excited to show him what I do.”

A week before her final NASCAR race, she isn’t sure what her emotions will be when the green flag drops for the 500. She thinks she’ll be fine but noted that when she announced her retirement in November she unexpectedly began to sob.

“Imagine when you leave here on Sunday, you don’t have anything to do really for a couple of months. Seems pretty exciting, doesn’t it? Right? That’s how I feel,” she said. “But when I think next Sunday comes, I’m sure I’ll be a lot more retrospective or introspective and emotional about the finality of it. And, you know, just have a little bit more perspective. But right now, I’m fine. I’m good. I’m excited about it all.

“I made the decision last year that this is what I was good with. Otherwise, I wouldn’t have been doing it. So, I’ve had a lot of time to mentally transition.”

Eury was crew chief for 51 races over three Xfinity Series seasons with Patrick. When rides for the “Daytona Double” did not materialize as predicted, Patrick worked behind the scenes to move the process along.

She asked GoDaddy founder Bob Parsons if he had interest in sponsoring her again. GoDaddy decided to rejoin Patrick for her final two races, and she reached out to Eury to set up her Daytona ride. It will help bring her NASCAR career full circle before she walks away from driving at Indianapolis Motor Speedway.

Patrick met with Eury last month in Charlotte, North Carolina, and again when she arrived at Daytona on Friday. She said she had stayed in touch with Eury over the years, and the familiarity will help her get ready for her NASCAR finale.

“That part of it really is what makes me feel comfortable. From a performance standpoint, he’s someone who can look after me, but also from a comfort standpoint — I don’t have to try to win the Daytona 500 with somebody I never met before,” she said.

She found the same comfort in getting back to her motorhome, where she will be joined this weekend by her sister, two nieces and the two dogs she shared with Stenhouse. Patrick noted her bus is parked in a different location — she and Stenhouse were always side-by-side in the motorhome lot — but that’s the only difference.

“It always feels good to get back to the bus for the first time. It always has,” Patrick said. “I love coming in the bus because it feels so familiar. I am so quick in the kitchen. I know where everything is, it’s very easy.”

She’s now parked next to Eury and has more than a week to see how she’s received in the Cup community. Few colleagues have seen her since the November season finale weekend, when she announced her retirement plans . She and Stenhouse split shortly after she released her book , began dating Rodgers and is now in Daytona for her NASCAR finale.

“It’s only the normal amount of weird that one can imagine in this situation,” she said.

Byron turned a lap of 210.681 mph in Saturday afternoon’s practice at Daytona International Speedway. It was the fastest lap of two sessions.

Ricky Stenhouse Jr. was second fastest at 201.649 mph. Stenhouse won two plate races last season, at Talladega in the spring and at Daytona in July. Joey Logano was third and followed by Denny Hamlin.

David Ragan and Michael McDowell were the surprises of the first day of practice by posting the fifth and 10th fastest speeds. Qualifying for the first two spots in the Feb. 18 season-opening race is Sunday.

In Saturday’s first practice, Kyle Busch led all four Joe Gibbs Racing Toyotas to a sweep of the speed chart. Busch’s best lap was 199.743, with no driver topping 200 mph in the early practice.