Teens to perform with Salisbury Symphony in ‘Bernstein and Prodigies’ 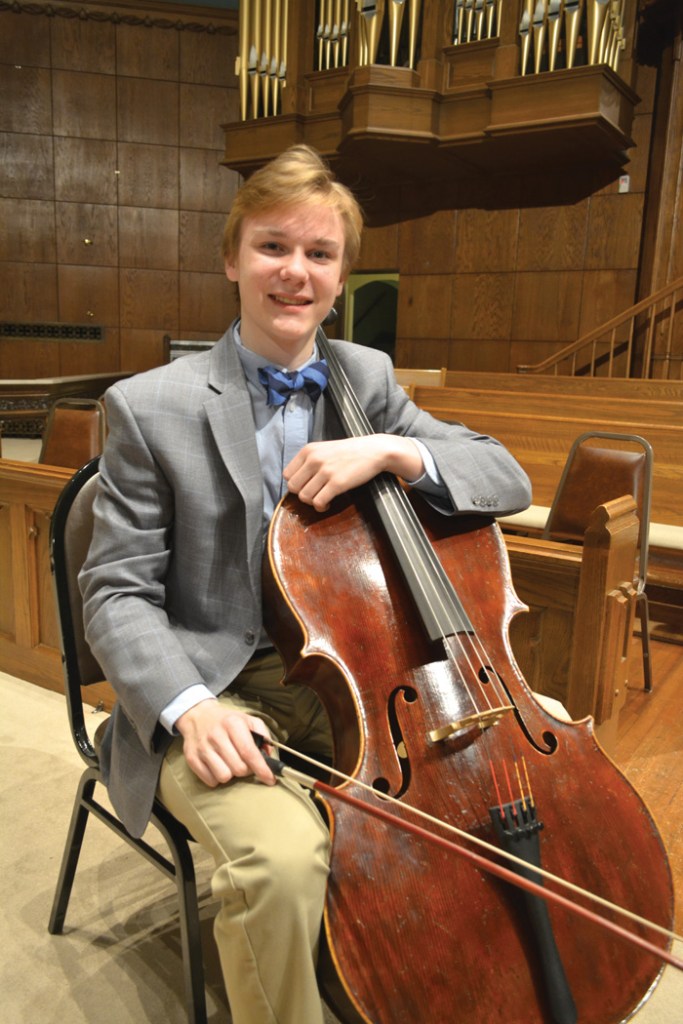 Kevin Agner will play the first movement of Elgar’s Concerto at the Salisbury Symphony’s “Bernstein and Prodigies” concert Feb. 18 at Livingstone College.

The word “prodigy,” to be sure, is a loaded word. It means a lot of things to a lot of people, says cellist Kevin Agner.

“I really don’t consider myself a prodigy,” says Kevin, 16. “I just enjoy playing for people, and playing for the church.”

Kevin is a featured soloist in the upcoming “Bernstein and Prodigies” concert with the Salisbury Symphony on Sunday, Feb. 18, at 4 p.m. in Varick Auditorium on the Livingstone College campus. Joining him on the program will be violinist Caroline Smoak, 14, who lives near Charlotte. The concert also features the Rowan County Fifth Grade Honors Chorus.

Maestro David Hagy defines prodigy this way regarding Kevin and Caroline, “They’re both playing pieces well beyond their years. It is such a joy to work with both of them.”

“I’ll take the compliment, for sure,” Kevin says.

A member of St. John’s Lutheran Church, where he plays frequently for services, Kevin is a junior at Gray Stone Day School. He played “Elegy” at a family symphony concert a couple of years ago, and reprised the piece for a Pops at the Post performance in 2016. He’s also played with the symphony in its annual performance of “Nutcracker.”

Additionally, Kevin has performed with the Charlotte Symphony Youth Orchestra the Greensboro Symphony Orchestra, and the all-state orchestra.

He became intrigued with the cello about seven years ago. Nancy Bourne, the wife of his great-uncle, the Rev. Terry Agner, is an accomplished cellist, and encouraged him to play.

He now takes lessons from Dr. Mira Frisch, the cello professor at UNCC. Over the years, he’s given recitals in the St. John’s chapel as he’s mastered various pieces. For the “Bernstein and Prodigies” concert, he’ll play the first movement of Elgar’s cello Concerto.

“There are really two major cello concertos,” Hagy explains. “The Dvorak concerto which will be played in March by our cello principal, and the Elgar concerto, written 20 years later. It’s so introspective. It takes a certain level of maturity to play this piece.”

Hagy asked Frisch if she thought Kevin was ready for this piece. Her answer was yes.

“I just knew it would be a challenge, and something the audience would love,” Hagy says.

“This is my favorite childhood piece,” says Kevin, who began learning the concerto in September. “It’s very emotional and very musical. It’s the type of piece I thrive on playing. I thought I could grow in my skills to play this piece. It’s definitely in the professional repertoire, but it’s not uncommon for high-schoolers to play.”

Although Kevin has memorized the piece and continues to work on it every day, he says he really felt confident playing it by mid-December. Now he’s working on polishing and refining parts.

He likes to practice over an hour every day. Sometimes it happens, he says, and sometimes it doesn’t. He has a 2 ½-hour practice with the Charlotte Youth Symphony Orchestra each Monday, and a one-hour lesson with Frisch each week.

He plays church league basketball and will play tennis this spring. He says he practices cello with efficiency.

“My teacher emphasizes how important it is to practice the right way,” he says. “It’s all about trying to be very relaxed while playing. You don’t want to cram it in.”

Kevin’s dad, David, kindly takes notes for him during lessons, so Kevin can concentrate on the music.

“Sometimes I do have to ask a question or two about the notes,” Kevin says, chuckling, as his dad is a physician.

They also enjoy good quality time in the car on the way to and from Harrisburg for lessons, Kevin says. “It’s definitely an easy way to sit and talk.”

At Gray Stone, Kevin is a member of the Science Olympiad, National Honor Society and Spanish Honor Society. Besides playing cello at church, he also plays in the summer for residents of Trinity Oaks.

He’s starting to look at colleges. He plans to combine a cello performance major with a pre-med major. His sister, Laura, is a sophomore at Salem College, and his sister, Rebecca, is a senior at UNC.

His parents are, of course, proud of him. But it’s more than that.

“God gave him this gift,” says his mom, Sally.

“He feels a responsibility to share that gift,” his dad adds. “The cello brings joy to lots of people.” Caroline has won multiple competitions, including one just recently that will enable her to play with the Charlotte Symphony this spring. She performed with the Winston-Salem Symphony in February. Caroline won the senior division of the Peter Perret Youth Talent Search in December — she won the junior division in 2016. This time, however, the homeschool freshman competed against high school sophomores, juniors and seniors.

“She was nervous, of course,” Smoak says. “But she’s a perfectionist, and she was surprised and very excited to win.”

“To be a great musician,” her mom says, “your life needs to be full and rich.”

And Caroline’s is just that. In the middle of her four siblings, ages 8 to 16, she enjoys piano, reading, and traveling and being outdoors with her family.

To purchase tickets for “Bernstein and Prodigies,” please visit www.salisburysymphony.org or call 704-216-1513.

Love the second time around: Couples find happiness after…