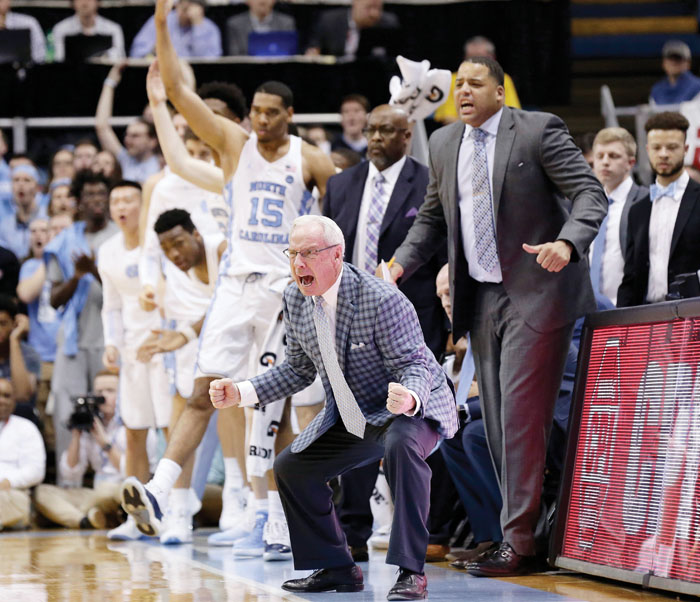 GAME OF THE WEEKEND: No. 21 North Carolina at N.C. State, 2 p.m. The Tar Heels face back-to-back rivalry games in a span of less than 48 hours, taking on No. 9 Duke on Thursday night before the quick turnaround trip to nearby Raleigh to face the Wolfpack (16-7, 6-4). N.C. State stunned North Carolina in overtime in Chapel Hill two weeks ago, and a season sweep of its biggest rival would be a welcome line on the Wolfpack’s NCAA Tournament resume under first-year coach Kevin Keatts.

LOOKING AHEAD: No. 2 Virginia visits No. 25 Miami in the biggest game of the early week. The Cavaliers, just the third ACC team since 2001-02 to win its first 12 league games , look to be a weekend victory over Virginia Tech away from returning to No. 1 for the first time since the Ralph Sampson era in 1981 after losses by No. 1 Villanova and No. 3 Purdue. The Hurricanes’ defense has been solid, too, ranking fifth in the conference at 66.3 points allowed per game and beating Wake Forest in their first game back in the Top 25.

PLAYER TO WATCH: Boston College’s Ky Bowman is doing a little bit of everything for the Eagles. Bowman, the team’s second-leading scorer at 16.8 points per game, is the only player in the league who’s leading his team in both rebounds and assists in ACC games only. Bowman averages 8.2 rebounds and 4.7 assists in conference play.

INSIDE THE NUMBERS: Home-court advantage might not mean as much anymore in an ACC in which teams seem to be finding ways to win on the road. Over the last 23 conference games entering Tuesday night’s action, road teams in the ACC are 12-11. Five teams are at .500 or better on the road in league play, led by Virginia (7-0) and both Duke and Virginia Tech (3-2 each).

ON THE WOMEN’S SIDE: It’s a two-team race for the No. 1 seed in the ACC Tournament, with No. 4 Louisville (24-1, 10-1) holding the tiebreaker edge against No. 5 Notre Dame (22-2, 10-1) by virtue of its head-to-head victory. The Cardinals step out of league play Monday to rekindle an old Big East rivalry with top-ranked Connecticut.