Speed, tricks and big air: What to watch from Pyeongchang 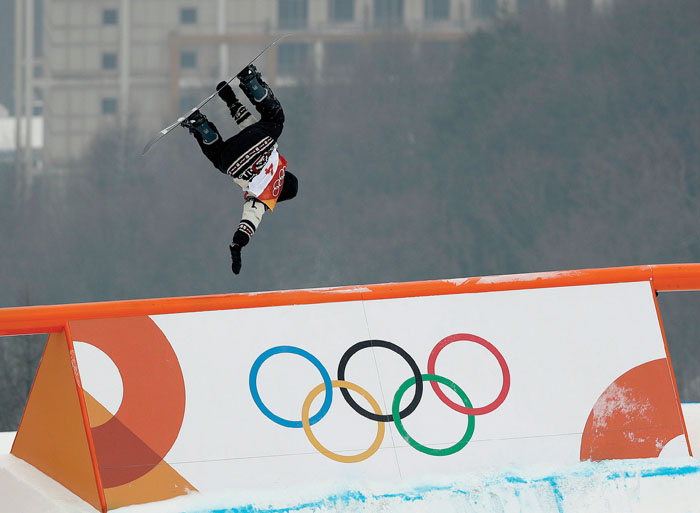 PYEONGCHANG, South Korea (AP) — After a night of pomp and politics, Olympic athletes are getting down to what it is all about: competition! Day 1 features medal events in short track speed skating, snowboarding and biathlon:

Here are some key things to watch. All times Eastern:

Not all politics will be left at the opening ceremony. While medals will be awarded in a number of disciplines, one of the biggest ticket events is a preliminary round of women’s ice hockey (7:10 a.m.). The combined Korean team will make its debut against Switzerland. Watch to see how many North Korean players take the ice because the team was created a few weeks ago. Also, will North Korean leader Kim Jong-Un’s sister attend? Will the North Korean cheerleading team?

The mixed doubles curling round robin, which started before the opening ceremony, continues Saturday. US sibling team Becca and Matt Hamilton have been struggling in early competition. They lost on Friday in a 9-1 rout to a young Korean team and 9-4 to the Swiss, who stunned with a rare perfect score. The Canadians are generally considered the favorites in the strategic sport. Watch as the teams vie to put their stones as close as possible to the center and block your opponent from doing the same. Competition starts at 6:00 a.m.

Short track speed skating will feature men’s 1,500m semis and finals featuring three-time US Olympic medalist J.R. Celski. Despite recent injuries, he won bronze in this event at the world cup in Seoul. He is the only veteran Olympian skating for the U.S. men’s short track team.  Heats start at 5:25 a.m., semifinals at 6:32 a.m. and the finals at 7:22 a.m.

To the uninitiated, short track may look like ice-bound roller derby, but the high speeds and quick turns require agility, skill and no small amount of fearlessness. The women will also start competition with heats in the 3,000m relay. Heats start at 6:52 a.m.

South Korea is a favorite in both events, guaranteeing a big, enthusiastic crowd in the stands.

Slopestyle snowboarding made its debut just four years ago at Sochi. A combination of rail riding, jumps and tricks, it offers a nice sampling of what snowboarding can be. Judging is highly subjective, with nine judges watching for different elements including “impression.” New US Olympians Chris Corning, Red Gerard and Kyle Mack join veteran Ryan Stassel in contention. Keep an eye out for Norway’s Marcus Kleveland. Only 18, he was the first to complete a quad cork 1800 in competition at the Winter X Games in 2017. Qualifying heats started at 8:00 p.m. The final will begin at 9:04 p.m. Sunday.

The men will hit the “normal” hill at 109 meters. The U.S. team is a slate of new faces, including a group who train together at the Norge Ski Club near Chicago. Watch for Kevin Bickner, who set a U.S. distance record of 244 1/2 meters last season in Norway. Austria’s Stefan Kraft will make his Olympic debut. German powerhouse Andreas Wellinger bested the field in qualifying, defeating the defending Polish Olympic champion Kamil Stoch. Competition starts at 7:35 a.m. and the final is scheduled to lift off two hours later.

The women will fight for medals in the 7.5km/7.5km skiathlon, an event that forces athletes to use both classical and freestyle techniques, back-to-back. Norway’s Marit Bjoergen, who has earned three gold medals in each of the past two Olympic Games, has the chance to become the woman with the most medals from a winter games. With her current total of 10, she shares that title with two other athletes. Competition starts at 2:15 a.m.

Medals will be awarded in the 7.5km women’s biathlon, the quirky but incredibly difficult sport of cross-country skiing and shooting. It has its roots in the hunting skills needed for survival in Scandinavia, where the sport is popular. Watch how the competitors slow their breathing after sprinting in order to shoot straight, once standing and once flat on the ground. The gold medal race will start at 6:15 a.m.

PYEONGCHANG, South Korea (AP) — Pyeongchang Olympic organizers are investigating a possible attack on their internet and Wi-Fi systems that took place about 45 minutes before the opening ceremony.

“It didn’t affect the opening ceremony,” Park said. “It went as planned. We just had some issue with our internal systems, but we are working to normalize that.”

She said the systems were almost back to normal about 15 hours after the problems were discovered.

Park declined to call it a cyberattack and said she didn’t want to speak in detail since organizers were still trying to identify the cause.

“We don’t want to speculate right now,” she said. “It’s not good to guess.”

She said the outage affected only “non-core” systems and had no impact on “the actual events” during Saturday’s first full day of competition.

Organizers suggested technical problems might have been caused by the mountainous region in which the Olympics are based.

Security experts have cautioned that large events like the Olympics are targets for hacking, even in a country like South Korea, which produces some of the world’s most sophisticated technology.