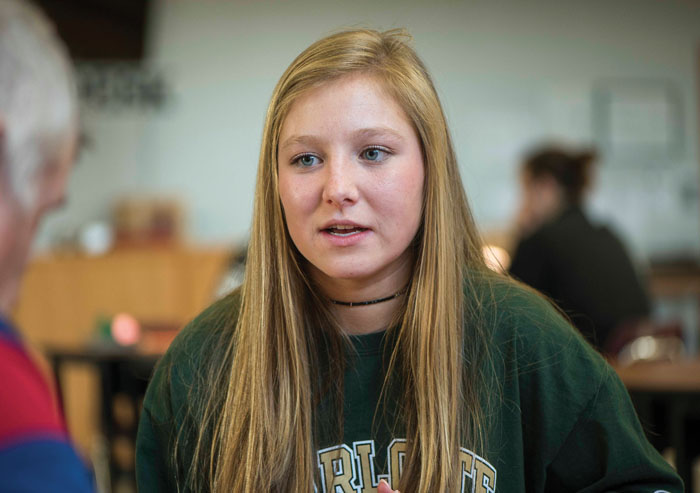 SALISBURY — Some, including Salisbury soccer coach Matt Parrish, describe Julia Honeycutt as tenacious, while others are convinced she’s a barrel of fun.

She’s actually both of those things. She’s one of those rare people who approaches every aspect of life with a sincere smile, but she’s also someone who can turn it up with supreme intensity and exceptional focus once she steps between the lines in an athletic arena.

“The ultimate competitor,” Parrish said. “She plays the game with passion, never quits working toward the ball. She has a drive that’s inherent. You can’t teach it. You either have it or you don’t, and she definitely has it.”

A two-time county player of the year as she prepares for her senior season, Honeycutt is a strong enough soccer player that she signed with the Charlotte 49ers on Friday in front of a throng of well-wishers. She’s scored 57 goals for Salisbury over the years as a versatile midfielder, but she’ll be a defender in college. She was recruited by the 49ers to play left outside back.

“Knowing the coaching staff and the players was a factor, but what really drew me to Charlotte was their style of play,” Honeycutt said. “Most teams just want to force the attack, but Charlotte likes to possess the ball and control the game. They control the ball, they build — and then they attack.”

Honeycutt has the advantage of favorable genetics. Her parents, Bobby and Leah Ann, are North Rowan graduates who competed for UNC — Bobby in baseball and Leah Ann in track and field.

Julia isn’t physically imposing at 5-foot-6, but she combines fine quickness with great coordination and surreal anticipation. She’s been well-rounded for the Hornets, helping the cross country team get to the state championships as a junior and playing No. 2 singles and No. 1 doubles for the tennis team that won the state championship as a senior. She also played varsity basketball as a freshman.

Honeycutt tried every sport when she was growing up at Sacred Heart, but it was soccer that’s grabbed her heart and didn’t let go. Her best friends played soccer, her older sister (Kayla, now a UNC sophomore) played soccer, and she got involved with club soccer and competed at a high level early in life.

“I always had a love for the sport,” Honeycutt said. “Some of the best friendships I ever had were through soccer, and I also never had a bad soccer coach. Those things make you love the game.”

Soccer has been her focus for a while, and not just with the SHS Hornets. She’s spent a lot of time and effort commuting to the Lake Norman Soccer Club and later to the Carolina Rapids Soccer Club, an elite team on which most of her teammates were headed to Division I schools.

“Julia has always been good at managing her time and different interests and not letting anything get to her,” Leah Ann Honeycutt said. “She’s laid-back most of the time, and that’s a good quality to have. She’s always been a fun kid.”

Commuting to those soccer practices and matches provided a challenge for Honeycutt, who also was determined to continue to contribute to fall sports at Salisbury. Her mother drove her to club soccer practices, so she could nap in the car if she needed rest.

“There were some late nights doing homework after practice,” Honeycutt said. “But it was worth it. It was a great fall of soccer and I got to be part of a state championship in tennis. That was always a goal — to be a state champion.”

While Honeycutt’s soccer career at Salisbury has a final chapter yet to be written, she’s already accomplished a great deal. She’s been All-State and she’s been co-defender of the year in the Central Carolina Conference twice. She’s been a terror for the Hornets, dominating the midfield, attacking when needed, concentrating on defense when needed, with her role depending on the game plan and the personnel of the opponent.

She was instrumental in Salisbury’s 17-2-2 season last spring that included a 9-0-1 league record and a CCC championship.

Parrish’s most vivid memory of Honeycutt’s junior season was the season-ending 4-3 loss to CATA in the second round of the 2A state playoffs. Honeycutt played with a severe ankle injury but scored a tying goal early in the second half.

“It was an injury that she wasn’t going to use as a crutch, but, honestly, the day of the match she couldn’t even walk,” Parrish said. “But  the match starts, and she’s out there running. She gave us the power to make that match very tight.”

Honeycutt’s role will change as a senior. She’s been a leader for a while, but now she’ll be leading from a vocal standpoint as well as by example. A lot of the girls who have been synonymous with Salisbury soccer for years— Ceci Cardelle, Katie Bullock, Juliana Anderson, Nellie Brown — have graduated.

“I’m one of the oldest now,” Honeycutt said. “I want us to win, but I also want us to do so in a fun environment. I want this to be a memorable season.”

Teammate Ellen Simons, one of the Hornets’ returning All-CCC players, is looking forward to Honeycutt showing the way.

“Julia has always been a great teammate, someone who wants what’s best for everybody on the team,” Simons said. “If you do something wrong, she’ll correct you, but in an encouraging way because she wants you to be better. And she’s just so focused. Even in warmups, you can see that she’s ready to go.”

Honeycutt’s long-term goal is dental school, but her immediate concerns are Salisbury soccer and her final months of high school.  She’ll approach those things with her unique combination of a sunny disposition and a burning competitive spirit.

“On signing days like this, there’s some real joy, but there’s also a hint of sorrow because the window is starting to close on a great career,” Parrish said. “Julia has been a pleasure to coach.”