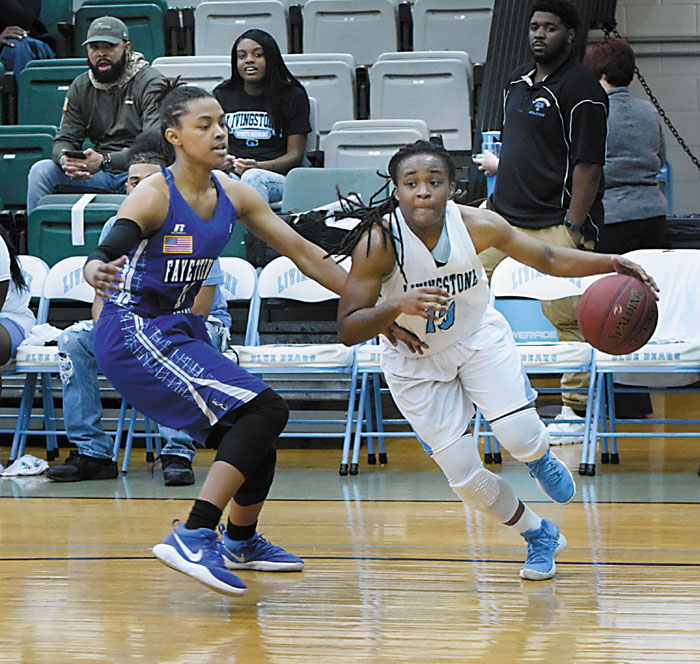 SALISBURY — Being undefeated in CIAA Southern Division games at 7-0, Fayetteville State women’s basketball coach Serena King-Coleman said that the Broncos have been getting “everybody’s best game.”

Instead, Livingstone got FSU’s best game here Saturday afternoon at New Trent Gym and it resulted in a 91-59 defeat.

Livingstone (6-17 overall, 1-12 CIAA) had put it all together on Wednesday, snapping a 12-game losing streak by winning at Shaw, 90-81. That result was definitely on King-Coleman’s mind.

“Every team worries me,” said King-Coleman, who is in her second year at FSU. “So yes, we were worried about Livingstone.”

The score was 47-31 at halftime and despite some brief excitement at the beginning of the third quarter, the Blue Bears were as dismal as they had been during the recent losing streak.

“I really don’t have an explanation for that performance,” said Livingstone coach Tiffany Silver, who seemed truly at a loss for words. “We really didn’t play team basketball on either end of the floor and reverted back to being insecure and lacking confidence.

“For whatever reason, I don’t know how you come off of such a good game where everybody just did what they do well … and that’s all we asked from them today,” continued Silver. “But I don’t want to take anything away from Fayetteville State. They showed why they are leading our division. They were hitting on all cylinders today. They passed and shot the ball so well today … and they move up the floor so very quickly, it created problems for us.”

The Broncos dished out 17 assists, led by Bennett with six.

“We’ve been focusing on team ball and I’m proud of them for that,” said King-Coleman. “We’ve been emphasizing assists and hitting the open person and not necessarily taking the first available shot, but looking for the best shot every time down the court. And I think we did a great job of that today.”

Yakima Clifton, FSU’s 6-0 forward, a junior transfer from Division I Presbyterian, flashed her talent even though she scored just six points and grabbed six rebounds.

“Clifton did a lot and started a lot of the fastbreaks and when she does that, we’re really good in terms of getting into transition,” added King-Coleman. “She’s so unselfish … I’d really like her to shoot a little more but when you have a kid who is that athletic and who wants to share the ball, it’s hard to be unhappy with her.”

Livingstone began the second half on a 7-2 run and when post player Nina Robinson dropped in a layup, the Blue Bears were within 11 points at 49-38.

But that woke up the Broncos from a short nap and the visitors exploded with a 19-6 run and led, 68-44, by the end of the third quarter.

Things got worse for Livingstone in the final period, the FSU lead reaching 30 points several different times before Kayla Robinson’s 3-pointer with 19 seconds left made it an even 32-point final margin.

The Blue Bears were hurt by their own miscues — 26 turnovers and 39 percent shooting from the field.

NOTES: Freshman guard Taylor Perkins, who led Livingstone with 18 points in the win over Shaw, played just eight minutes and scored four points. … The Blue Bears have an open date on Wednesday and return to action on Saturday, hosting Johnson C. Smith at 2 p.m.