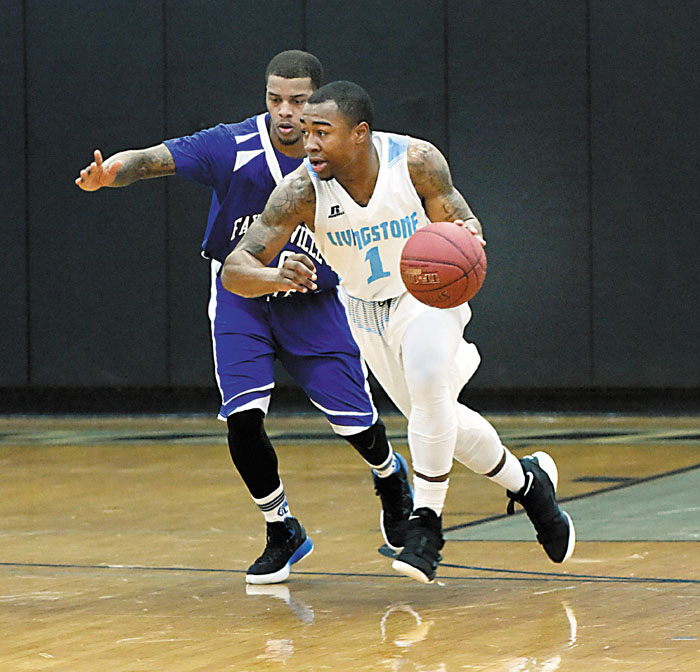 SALISBURY — The stock market wasn’t the only thing that tanked this past week.

“A bad week? Yes it was,” coach James Stinson said from his office chair. “It wasn’t good at all. The only thing we can do is go back to the drawing board and continue trying to get better.”

That’s sound thinking, until you realize time is no longer Livingstone’s friend. The Blue Bears (8-11, 6-7 CIAA) have lost five of their seven Southern Division games with three to play — and two of those opponents (J.C. Smith and St. Augustine’s) already own January victories against them.

“We’ve dug a hole for ourselves for the (conference) tournament,” said Roger Ray, the sophomore guard who scored 16 of his team-high 20 points in the second half. “Now, we’ll have to play our way out once we get there.”

The Blue Bears shot 50 percent from the field (29-for-58) and won the rebounding battle (39-24), but couldn’t beat the Broncos for the second time this season. Credit an FSU defense that forced 19 turnovers and an offense that placed four scorers in double figures, topped by Denzell Hosch’s 24 points.

“We made adjustments from the previous game (a 78-62 LC win on Jan. 20),” said Hosch, a 26-year old sophomore who spent four years enlisted in the U.S. Army. “It was mainly following the coach’s game plan. We needed to play harder — and that’s easy to fix.”

“That’s what Livingstone does,” he said. “They run all these players in and out and force you to play the tempo they want you to play. Tonight we matched their tempo. We didn’t catch them off-guard. We just made good basketball plays.”

The Blue Bears played their best in the opening nine minutes. Six-foot-9 freshman Lydell Elmore (13 points, 11 rebounds) hit mid-range jump shots from both sides and another from the right baseline as LC went up, 11-6, in the first five minutes. And when teammate Ja’Cory Livingston scored on an over-and-under layup with 11:25 remaining in the first half, the hosts had a 19-11 lead, their largest of the game. Odd as it seems, that may have caused a problem.

“We played around so much in the beginning,” said Ray, who shot 8-for-17 from the floor but misfired on all four of his three-point attempts. “We were up and had a lot of momentum, but we were taking it like we were up by 20 (points). The whole time, they were right around the corner.”

They were. And they introduced themselves with a 19-2 scoring spree that culminated with Hosch’s 3-ball from the top of the key — a 22-foot bomb that put the Broncos ahead 30-21 with 4:12 on the first-half clock.

“I remember that shot,” said Hosch, a Shelby native who went 4-for-8 from beyond the arc. “I asked (Spencer) to run a play for me and he called an elevator screen. It’s where two guys seal off my man so I can come up top and shoot.”

Stinson felt Livingstone’s defensive pressure was a bit lax during the game-changing flurry.

“We didn’t get any stops,” he said. “We gave up second-chance rebounds. And on the other end, we missed point-blank layups and tip-ins.”

The Broncos seemingly had LC roped and tied early in the second half when senior Josh Smith canned a 3-pointer that provided a 53-41 edge. Livingstone fought back and closed within 63-61 when the fast-breaking Elmore took a thread-the-needle bounce pass from Ray and hit a layup with 2:18 remaining. Less than a minute later, LC’s Malik Smith scored on a right-handed tip at the basket to make it 65-63.

“It’s always tough on the road,” Spencer said. “We knew it was coming. We knew they were going to make a run and try to catch us.”

The Blue Bears never did. Forced the fight the clock, they watched the Broncos convert eight of 12 free throws in the final minute to douse their comeback.

“It was a hard loss,” Elmore quietly said. “We should have won. We should be better than this.”