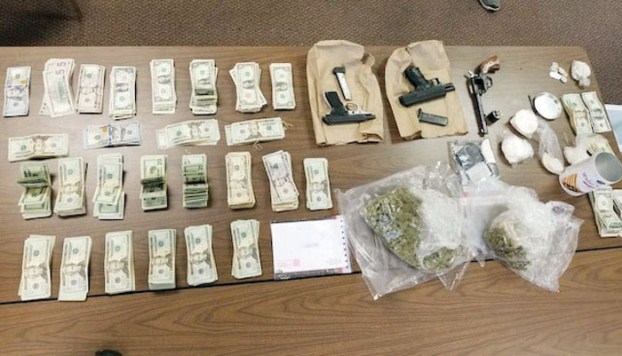 Salisbury police investigators seized over $10,000 as well as guns, cocaine and marijuana from a vehicle following a monthlong investigation. Photo provided by Salisbury Police Department

Letter: Marijuana is not harmless

In regards to Gene Overcash’s letter, “Does marijuana arrest make sense?” (Feb 8): Maybe we can pass a law that says we can just choose what laws we think apply to ourselves or other people. Why should I get a ticket for speeding? I’m not hurting anybody and I can handle my truck pretty well. I guess the highway patrol officers just don’t understand my skill level.

Ten and a half pounds of pot is illegal. Selling drugs is illegal. Until it isn’t, it still is.

Maybe the suspect was selling to kids that later ended up on meth, opioids, heroin, crack, trying to get that next level of high, and becoming life-long customers.

I don’t care how you decide to kill your brain cells as long as it doesn’t affect me, my family or my friends. Until there is a reliable method of determining how “pot impaired” a pot user is, it needs to stay illegal.

Maybe if pot dealer could sell someone you know some harmless pot which later leads to other bad life decisions you might understand the impact of short-term “high,” mind-altering activities.

What’s really ironic is a lot of the pro-pot people are same ones that ran the tobacco industry off, want to limit the size of soft drinks, and tax sugary foods. It’s the liberal “ Let me tell you what’s best for you” way of thinking. Oregon now has a overabundance of pot production that is being moved in the black market to other states. Wow, no one saw that coming.

I’m forced to by crappy stupid-priced medical insurance that includes alcohol and drug rehab — which I will never use — because liberal politicians say I have to.

It ain’t always about just wanting to smoke a “harmless” joint.

I have to say I’m very very excited about the recent developments toward mitigating the horrendous litter problem in Rowan... read more