Leonard Pitts: Worse than an erosion of trust 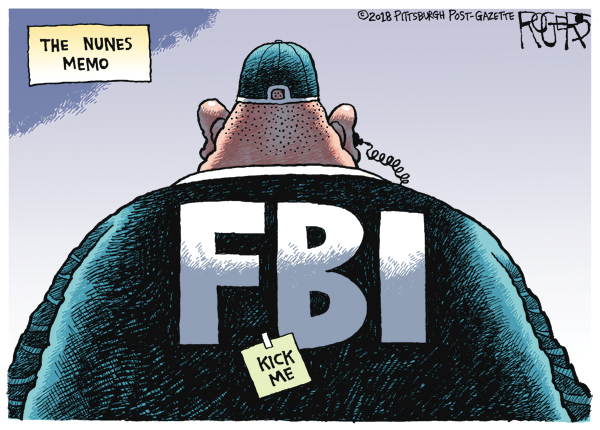 So apparently this is now Republican Party doctrine:

But you can trust Donald Trump.

Notwithstanding the bankruptcies, the fraud settlement, the admitted sexual assaults, the litany of lies about everything from crowd size to approval ratings to Inauguration Day weather, his word is golden. From Rep. Devin Nunes’ transparent attempts to save Trump from himself in the Russia probe to poll numbers indicating GOP voters would, indeed, support him even if he stood in the middle of Fifth Avenue and shot somebody, the party implicitly insists this self-interested con artist is a good man.

In Trump they trust. But the FBI is another matter.

The bizarreness of this cannot be overstated. Nor can the hypocrisy and the gutlessness. But we are here to talk about the danger.

For almost 50 years, Americans have fretted over the erosion of trust in our government. Well, erosion has now become destruction.

This has been a long time coming, of course. For years, Americans lived in blissful assurance that if the government said it, it must be true. Then came a watershed called Watergate. Following hard on the heels of the Pentagon Papers’ revelations that the government lied us into a war it knew to be unwinnable, this tale of dirty tricks, lies and cover-ups in the Nixon White House shredded the nation’s faith in its leaders in ways that have reverberated down the intervening decades.

A little skepticism toward government is probably not a bad thing. But we have far more than a little. In 1958, 73 percent of us trusted the government to do the right thing all or most of the time, according to a Pew Research Center Poll. Last year, 18 percent did.

Similarly, it is not the worst thing in the world if people are a little dubious of the news business. But a national news media approval rate of 11 percent among Republicans — this, also, from the folks at Pew — goes far beyond dubiousness.

And never mind that in knocking down media, law enforcement and intelligence gathering, Trump topples pillars of American democracy. Never mind that democracy is something we considered sacred not too long ago.

Never mind. Republicans acquiesce in these acts of intellectual vandalism. And they should be ashamed.

Yes, there will inevitably come moments when institutions disappoint and yes, one is obligated to challenge them when they do. But this is not that. This is dangerous distrust sown for political gain by an opportunistic narcissist. And it’s working. Already a new Reuters poll says that 73 percent of Republicans now think the FBI is unfair to Trump — 73 percent.

Is this country in trouble now?