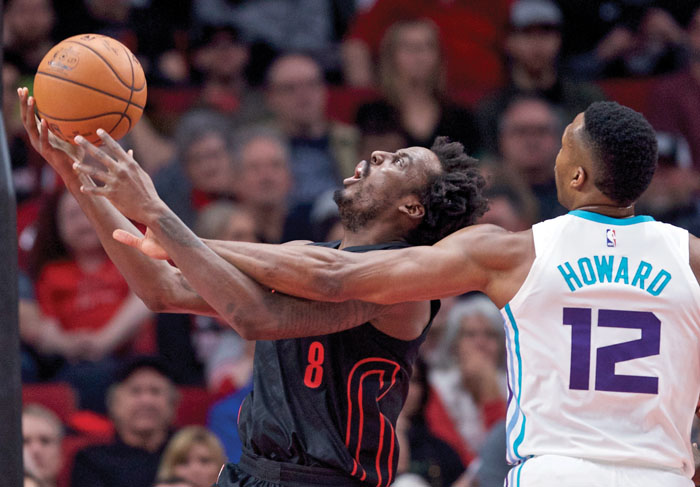 By ANNE M. PETERSON, AP Sports Writer
PORTLAND, Ore. (AP) — Jusuf Nurkic had 24 points and 14 rebounds, and the Portland Trail Blazers returned home with a 109-103 overtime victory over the Charlotte Hornets on Thursday night.
CJ McCollum added 22 points for the Blazers, who were coming off a winless three-game trip. The victory over the Hornets was their ninth straight at Moda Center.
Kemba Walker, who was named an All-Star reserve earlier in the day, scored 40 points for Charlotte. Marvin Williams, who returned after missing four games with a left ankle sprain, finished with 10.
Portland pulled ahead 102-100 in the extra period before Dwight Howard fouled McCollum on a 3-point attempt. McCollum made two of three to extend Portland’s lead, and Maurice Harkless dunked with 37.4 seconds left to make it 106-100.
Walker hit a 3-pointer before McCollum’s layup on the other end all but sealed it with 12.2 seconds left.
After trailing 79-65 heading into the final quarter, Walker’s layup got Charlotte within 92-88 with just over five minutes left. Walker pulled the Hornets closer with a pair of baskets that tied it at 95. Michael Kidd-Gilchrist’s pull-up jumper tied it at 97 with 1:45 to go, and neither team could score the rest of the way in regulation.
At the trade deadline earlier in the day, the Blazers sent forward Noah Vonleh to the Chicago Bulls in exchange for the rights to center Milovan Rakovic. Vonleh, the No. 9 overall pick by Charlotte in the 2014 draft, averaged 3.6 points and 5.1 rebounds in 33 games for the Blazers this season, including 12 starts.
The Hornets made a move the day earlier, acquiring center Willy Hernangomez from the Knicks in exchange for Johnny O’Bryant and two future second-round draft picks. Hernangomez averaged 7.1 points and 5.8 rebounds in 98 career games with the Knicks, including 22 starts.
Hernangomez was not yet with the Hornets and it was likely he would not be available for Friday night’s game in Utah.
“I’m glad it’s over,” Portland coach Terry Stotts said about the deadline. “We’ve been getting ready for Charlotte. It really hasn’t impacted what we’ve done over the last few days. Certainly (GM Neil Olshey) and his staff have spent a lot of time, hours on the phone, in leading up to this. It’s probably more of a relief for the players because it is a stressful time.”
Portland jumped out to a 22-5 lead early, and went into the second quarter up 29-18, led by Nurkic with 10 points and five rebounds. Charlotte got within 44-42 on a pair of free throws and a 3-pointer from Walker, but trailed 49-45 at the half after Meyers Leonard hit a 3-pointer at the buzzer.
Walker finished the half with 17 points, including 15 in the second quarter.
Portland stretched the lead to 75-61 on a long jumper from Damian Lillard in the third quarter, and the Blazers kept the margin at double digits into the fourth until Charlotte’s late run.
Lillard finished with 18 points and eight assists.
TIP-INS
Hornets: Earlier in the day, Walker was selected as an All-Star reserve by Commissioner Adam Silver, replacing the injured Kristaps Porzingis. “It’s surreal. It’s my second one. I’m just very fortunate, very blessed,” Walker said.
Trail Blazers: The Blazers were thought to be considering a big move at the trade deadline, but Olshey, their president of basketball operations, told the team’s broadcasters: “We looked into the rental market and as it turned out, a lot of the things on the rumor mill weren’t true. Those guys just weren’t available.” … Maurice Harkless started for the Blazers at small forward.
CONDOLENCES
The Blazers were stunned by traffic collision in Houston that claimed the life of R.J. Adelman, the son of former Blazers coach Rick Adelman.
R.J. Adelman had been an assistant on his father’s staff when the elder Adelman coached the Houston Rockets from 2007-11. He also was player personnel director for the Minnesota Timberwolves when his father coached there.
“I would like to send out my sincere condolences to coach Adelman and his family for the tragedy of losing their son. Obviously it took everybody by surprise and certainly it’s an emotional day,” Stotts said.
UP NEXT
The Hornets visit the Jazz on Friday night.
The Trail Blazers visit the Sacramento Kings on Friday night.
___
More NBA basketball: https://apnews.com/tag/NBAbasketball