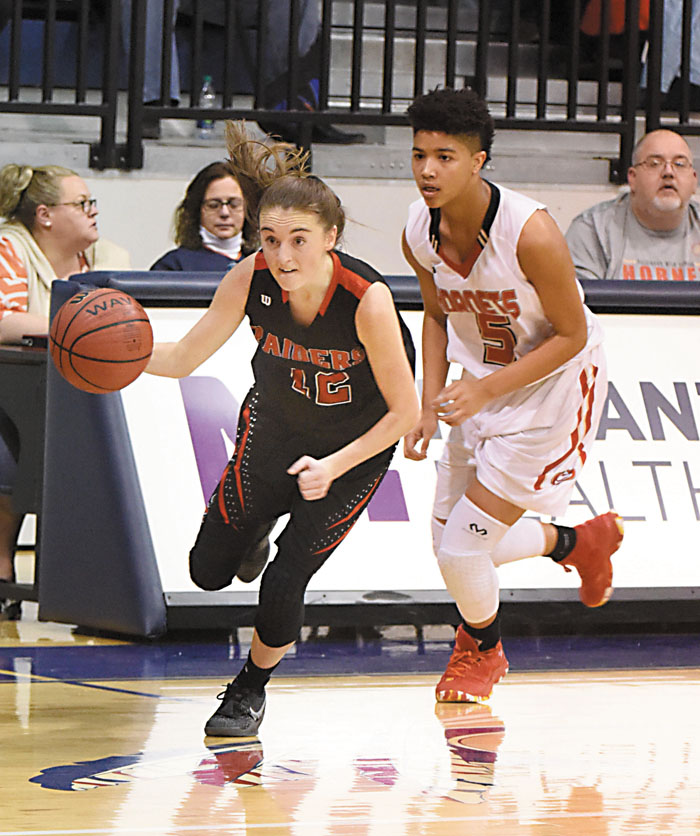 LANDIS — For everything it can’t do, what the South Rowan girls basketball team does best is find ways to win.

Especially against Central Carolina Conference rival Salisbury. The Raiders finished their regular season by surviving a 61-57 test-of-nerves Friday night — their third victory over the Hornets this season.

“I don’t know what it is,” junior Janiya Downs said, after host South (17-7, 14-4) won its eighth straight and carjacked Salisbury’s drive for a share of the league title. “We just seem to play our best against them.”

They do. South used Tazah Hardin’s buzzer-beating layup to dethrone Salisbury (19-4, 15-3) in a Christmas tournament semifinal, then received 24 points from Downs in an overtime conference win a week later. Last night, it benefited from a borderline backcourt call with 3.2 seconds remaining and held on for a seeing-is-believing triumph.

“We match up very well with them,” coach John Davis said, after South scored the game’s last four points and secured the No. 4 seed in next week’s conference tournament. “But this group, they knew they could do this. Most of them have been together three years and they know how to win. It’s what they do.”

Downs topped all scorers with 22 points and was joined in double figures by teammates Hardin (15) and Riley Corriher (14). Salisbury’s Brianna Troutman fought through foul trouble and contributed 17 points, 22 rebounds and seven assists. The Hornets had won 10 of their previous 11 games and enter the CCC Tournament as a No. 2 seed. Afterward, coach Lakai Brice was asked about the Raiders’ uncanny mastery of her otherwise-dominant team this winter.

“South Rowan, when they come to play us, they’re just ready to play,” Brice explained. “They step their game up when they play us.”

It didn’t start out that way. Troutman hit a pair of 3-pointers and Tacorra Robinson bulldozed her way for a last-minute layup as SHS jumped to a 19-10 first-quarter lead.

“We weren’t quite sure what defense we were in,” said Corriher. “And they’re such a strong rebounding team. Once we settled in, we figured things out and got more comfortable.”

South ignited its pilot light in the second period — when it scored 12 unanswered points and went ahead, 25-22, on a layup with 5:05 remaining in the half. Six-foot sophomore Whitney Arnott powered for a three-point play, then muscled in for a left-side layup. And when Hardin stole the ball from Troutman and raced past Salisbury’s defense for an uncontested bucket, the Raiders were on their way to a 36-32 halftime lead.

“We were taking quick shots, which led to long transition rebounds for them,” Brice said. “First, that gave them the momentum. Then it gave them the lead.”

“The first quarter sparked a fuse in them,” Hardin added. “We had to respond and we did that with our shooters. They’re all very confident.”

Corriher made the shot of the night with three seconds remaining in the third quarter expired. Her 30-footer from the left side stunned the thunderous crowd and gave South a 49-40 lead.

“She just threw that one up there,” Brice offered. “I think she thought the clock was running down because after she threw it up, she walked to the bench with time still left on the clock.”

The fourth quarter was filled with memorable Kodak moments. Troutman was whistled for her fourth personal with 4:42 to play, but continued playing aggressively. Her 12-foot set shot from the left side pulled Salisbury within 55-51 midway through the period. With 1:43 to go, she calmly sank two free throws to make it 57-55. And with 1:20 to play, teammate Anayia Fulson navigated the left baseline for a score-tying layup.

“We needed to do something different,” said Downs. “We couldn’t keep letting them get to the basket and hold the ball. I felt like I had to take over.”

Downs broke the tie when she converted the second of two free throws with a minute remaining — and Corriher hit the front end of a one-and-one with just 8.9 seconds to go. Then came a bit of controversy, when Troutman was called for a backcourt violation as Corriher applied defensive pressure. Predictably, the coach’s opinions were polar opposites.

“It wasn’t a backcourt,” Brice said. “She was straddling the line and moving forward. You can do that.”

Davis saw it differently. “She stepped across,” he said. “She had possession of the ball in the front court, then stepped into the backcourt. That’s the definition of backcourt right there.”

South’s senior night celebration couldn’t begin until Downs made a pair of nerve-wracking free throws to ice the win with two seconds remaining.

“We’re just a team that comes to practice, works hard and tries to get better,” Downs added. “That’s all this game was.”