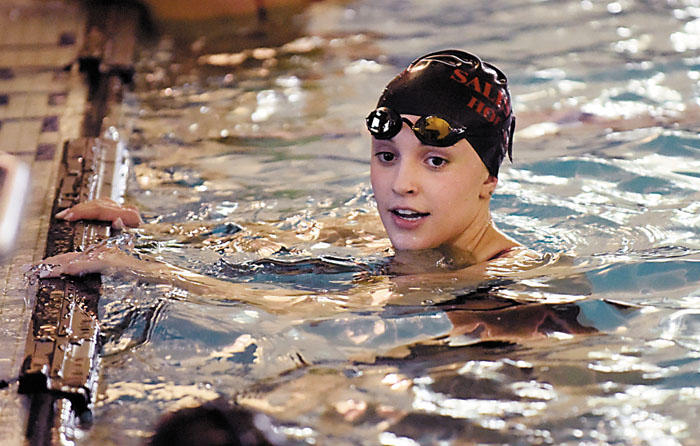 Wayne Hinshaw file photo/for the Salisbury Post ... Salisbury’s Kathryn Morrison, shown at the Rowan County Championships in January, won state 1A/2A titles on Friday in the 100 backstroke and the 100 butterfly. The state meet was held in Cary.

CARY — Salisbury senior Kathryn Morrison not only defended her 1A/2A  state title in the 100 backstroke on Friday, the small but deceptively powerful swimmer added the 100 butterfly crown to her long list of accomplishments.

Morrison double-dipped at the Triangle Aquatic Center in her final high school meet, taking the backstroke in  55.42 seconds and the butterfly in 55.54.

The butterfly had proven as elusive for Morrison as the winged insect from which it derives its name.

“She’d been sort of cursed in that event,” Salisbury girls coach Sallie Pittman said. “She was close in states last year and then she barely got out-touched in our conference tournament recently. Then she wasn’t real fast in the fly prelims today and was seeded fifth for the final. But she came out of Lane 2 and she took it, and I’d say she took care of that curse once and for all.”

Once Morrison won the butterfly, Pittman knew the backstroke was almost a sure thing — even against a very stout field— and Morrison got it done.

“There were a few (happy) tears today,” Morrison said with satisfaction.

Morrison led Salisbury’s girls to 143 points and a seventh-place finish. Those were impressive numbers for just four girls — the East Carolina-bound Morrison, the freshman Knorr twins, Emily and Katie, and senior Mary Kaufmann, who swam on the relay teams.

The foursome took seventh in the 400 free relay and sixth in the 200 medley relay.

Emily Knorr took second in the 500 freestyle and fifth in the 200 freestyle.

“For four girls, you can’t ask for much better than seventh in the state,” Pittman said. “They all swam their best times. Just a great day.”

Burton also contributed individual points with 11th place in the 50 free and 16th in the 100 free.

“The state is the meet we prepare for, and you could tell that by the tremendous times that we turned in today,” Salisbury boys coach Ryan Starrett said. “We really dropped our times in the relays from the conference and the county meets. We were rested and ready and we really showed up today.”

Now the Hornets have to move forward without Morrison and Ethan Knorr, both of whom wrapped up their fourth straight county swimmer of the year award.

“We’ve got a lot of good seniors,” Pittman said. “We’ll have to do some rebuilding.”

South Rowan didn’t score in the meet but got good individual performances from two relay teams and from Blaise Bumgarner and Cameron Hurd in individual events.