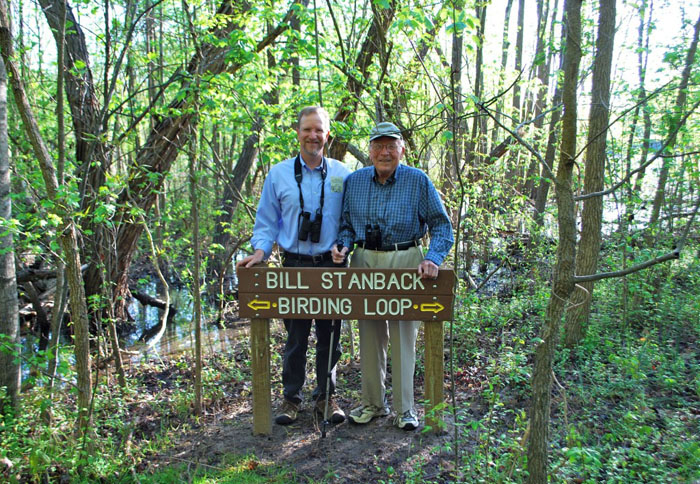 SALISBURY — For history’s sake, Bill Stanback will always be a business leader connected to the company that bore his family’s name — the one that made headache powder and lip balm.

He once served as Salisbury mayor, and when the Rowan County and Salisbury City Schools merged 30-plus years ago, it was Stanback who was asked to lead the committee overseeing that challenging transition.

His decades of work for civic organizations and his philanthropic nature led to all kinds of prestigious awards and his name being affixed to many things.

But there was more to Stanback, so much more that it was easy to forget these kinds of accomplishments. In the hearts and memories of people who knew him, Stanback was the adventurer.

He was the bird watcher, the animal lover, the hiker, the man who wanted to paddle a kayak or sail on the ocean. He stood up for causes, from gay rights to land conservation.

Stanback hammered  boards together on Habitat for Humanity homes. He was consumed with curiosity and the pursuit of knowledge. He loved to read.

“He would have been a wonderful professor,” said Nancy Hart Stanback, his wife of 39 years. “Bill was very, very bright.”

Stanback died Wednesday at the age of 95. He recently had taken a bad fall on steps outside his Salisbury home. Though he responded well to treatment at Presbyterian Hospital in Charlotte and later at Novant Health Rowan Medical Center, Stanback took a turn for the worse this week.

Flags were lowered in Salisbury at the news of Stanback’s passing. A 2 p.m. memorial service will be held for him Sunday at Catawba College’s Omwake-Dearborn Chapel.

Something else must be said of Stanback: He possessed an interest in and compassion for others.

“He was the kindest, most generous man,” Nancy Stanback said. “He would help anybody no matter what.”

Longtime friend Ed Clement said Bill Stanback rates as a historic figure for all the contributions he made to his community.

“Bill cared deeply about Salisbury and its people,” Clement said. “That came out in almost every conversation — his genuineness, unselfishness, which, of course, was manifested in decades of giving all across a broad spectrum of need in our community and beyond.”

Not too long ago, Clement said, he and Stanback were driving around town when Stanback asked what kind of car he was in. Clement explained it was a hybrid car and how the manufacturer boasted that it puts out 70 percent less emissions.

The 95-year-old Stanback said, “I’m getting one of these cars.”

“Doesn’t that tell you a lot right there?” Clement asked. “He was so sensitive to people and to human need and always wanted to make improvements to his town.”

Edward Norvell remembered the causes his friend fought for.

“He was an early leader in the 1960s fighting for civil rights, working with a number of prominent local leaders of all races and the National Conference of Christians and Jews to help integrate Salisbury peacefully,” Norvell said.

“He had also been a lead supporter of LGBTQ rights locally, statewide and nationally.”

Norvell noted Bill and Nancy’s strong patronage of the arts, health, education, the animal shelter, church, Scouting, the YMCA and other community efforts.

“I have also worked very closely with him in his tremendous support of land trusts and conservation across the state of North Carolina,” Norvell said. “I was with him two weeks ago, and I am so glad that I was able to tell him he was one of Salisbury’s angels.

“Now I wish I could have told him so much more.”

Bob Pendergrass, animal services director for Rowan County, came to know Stanback through his donations to park projects through the years. The men went hiking together a couple of times, and Pendergrass visited the Stanbacks’ restored 1872 home on West Bank Street on occasion.

“Bill was one of those remarkable people that once you had only briefly met him, you automatically knew that he was all about caring for others,” Pendergrass said. “He has done so much that will benefit so many.”

A 1939 Eagle Scout himself and the recipient of a Silver Beaver Award, Stanback spurred an initiative to make Boy Scouting more accessible to youth in hard-to-reach neighborhoods.

He helped to employ a professional Scouter who worked solely in urban neighborhoods.

“Bill was one of the brightest, finest gentlemen I have ever known,” Salisbury attorney Mona Lisa Wallace said. “(There were) so many wonderful things he did for so many. He was always a role model for me. (It’s) so sad to lose someone so amazing and special.”

Bill Stanback shared his love of nature and conservation with his cousin Fred Stanback Jr., who was a longtime business partner. They long ago advocated, for example, for the establishment of the 189-acre Ecological Preserve at Catawba College.

“Bill lived a life that exemplified leadership, benevolence, humility and kindness,” said John Wear, director of the Catawba Center for the Environment.

Through the ingenuity and entrepreneurship of Tom and his younger brother, Fred J. Stanback, the company’s production and sales of the headache powder kept growing.

The company went from making it in the upstairs of Tom’s home to a 35-by-80-foot building in Spencer. By 1932, the production facility had moved to Salisbury, and it doubled in size by 1941.

Stanback spent much of his youth in his family’s home in the 400 block of South Fulton Street, not far from the house he and Nancy restored in 2001.

Stanback graduated from Boyden High School and earned his business degree from the University of North Carolina at Chapel Hill and his master’s degree from Harvard Business School.

During World War II, Stanback served with the Navy on a destroyer escort in both the Atlantic and Pacific theaters. He joined the Stanback Co. in 1948, and cousin Fred Jr. came in 1952.

The Salisbury-based company, whose headache powders competed with Goody’s and BC, added its Chap-et lip balm in 1959. The headache powder’s familiar slogan was “Snap Back with Stanback.”

Fred Stanback Sr. died in 1972. Dr. Tom Stanback would live until he was 97. He died in 1982. Under Bill and Fred Stanback Jr.’s guidance, the company was incorporated in the early 1980s.

As chairman in 1986, Bill Stanback bought out his brother, Tom; cousins Fred Jr. and Jean Brumley; and his aunt Elizabeth Stanback.

Stanback Co. made its largest capital investment in 1996, then because none of his three children — Anne, John and Mark — were affiliated with the company — Bill sold Stanback to Block Drug Co. of New Jersey in 1999.

By then, Block Drug already had purchased Goody’s and BC.

“Despite my intentions to the contrary,” Stanback said at the sale, “I’ve come to realize I’m not going to live forever.”

Block Drug had assured Stanback it would keep producing headache powder in Salisbury for at least five more years.

That was important to her husband, Nancy Stanback said, because he wanted to provide some job security to his former employees. Block Drug reneged on the promise and soon left Salisbury.

“He hated that part of it,” Nancy Stanback said.

In his life outside work, Stanback married his first wife, Betty Anne Ragland Stanback, in 1951.

Over time, Stanback was named Industrial Man of the Year and Lions Man of the Year. Catawba College presented him with the Adrian L. Shuford Jr. Award for Distinguished Service in 2003.

The school also has a First Family Endowed Scholarship in honor of Betty Anne Stanback, who taught creative writing and journalism at Catawba. She died in 1977.

Stanback married Nancy in 1979. She remembered their days of courtship.

“I loved his brains,” she said. “He had a wonderful sense of humor. He loved animals and children. He was a lot of fun.”

“My children felt so welcomed by Bill,” Nancy said. “… They loved him dearly, and one of the nicest things was our children became good friends.”

Bill Stanback loved the water, and in a 44-foot sailboat they named “Wings of Morning,” the couple learned to sail and navigate the ocean. Over the years, they began in the Florida Keys, went on to the Bahamas, then the Southern Caribbean islands and as far south as Grenada and Venezuela.

Bill once hired a former captain of Walter Cronkite’s boat to help him sail from Wrightsville Beach to the British Virgin Islands, where Nancy joined them.

“Bill loved to navigate,” Nancy said, noting it was a carryover from his Navy days.

“We had the best adventures,” she said Thursday, “and we met people from all around the world.”