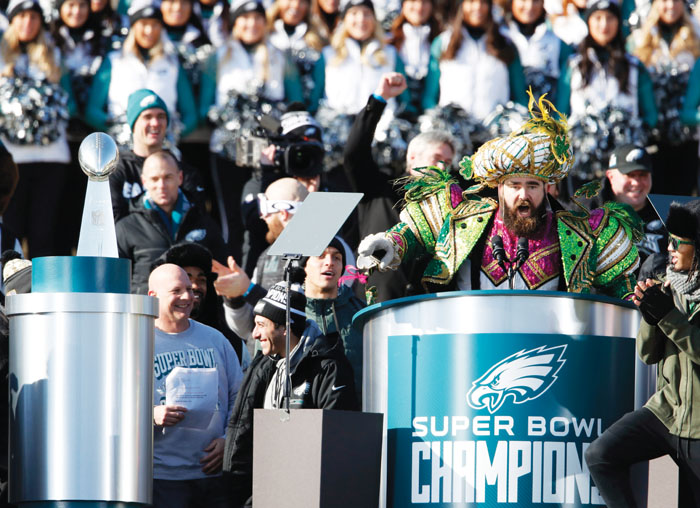 PHILADELPHIA (AP) — Philadelphia’s first Super Bowl parade provided catharsis Thursday for hundreds of thousands of Eagles fans, deliriously joyful after decades without a title and relishing the national spotlight on a team that few outside the city thought could win it all.

Fans clad in Eagles green jammed the streets from dawn near the stadium to an afternoon rally at the city’s famed “Rocky” steps, lining up 20 deep in spots to catch a glimpse of the champs. The Eagles rode in open-top double decker buses to the art museum that Sylvester Stallone made famous for a rally nearly 60 years in the making.

Center Jason Kelce gave voice to every frustrated Philly fan with a remarkable, impassioned and profane speech that had him defending the general manager, the coach and a litany of players who supposedly weren’t smart enough, big enough or talented enough to win a championship.

“We were a bunch of underdogs,” shouted Kelce, channeling Rocky himself. “Bottom line is we wanted it more!”

And so did football-crazed Philly — desperately.

Until Sunday’s 41-33 victory over the favored New England Patriots, the Eagles remained the only team in their division without a Super Bowl title — an ongoing humiliation that gave Philly an inferiority complex and made Eagles fans an easy target for fans of other teams, especially the rival Dallas Cowboys and New York Giants.

“This Super Bowl championship is for you,” Eagles owner Jeffrey Lurie told the vast crowd. “You are the most passionate and deserving sports fans on the planet. We couldn’t have done it without you.”

The parade began at the Eagles’ stadium complex and slowly made its way up Broad Street past the cheering throngs. Carrying the Lombardi Trophy, coach Doug Pederson walked part of the route — allowing fans to touch the gleaming hardware — while Lurie held a sign saying “THANK YOU FANS” as he stood next to the team’s three quarterbacks: Foles, injured starter Carson Wentz and third-stringer Nate Sudfeld.

Dan Tarvin, 29, was pumped after getting to high-five Pederson and GM Howie Roseman, who was instrumental in putting together a squad expected to compete for championships for years to come.

“They are more than heroes. They’re legends. They’re immortal in this city, forever,” Tarvin said.

Corey Carter, 32, of West Philadelphia, clutched a woodcut of an Eagle that he dubbed the “Lombirdy Trophy.”

Schools, museums, courts, government offices and even the Philadelphia Zoo were shut down so the city could fete an underdog Eagles team that few outside Philadelphia thought had a prayer of beating the mighty Patriots led by superstar quarterback Tom Brady and coach Bill Belichick.

Organizers prepared for as many as 2 million people, though city officials didn’t release a crowd estimate.

Terry Gallen, a fan from Glen Mills, in the Philadelphia suburbs, said he “broke down like a baby and cried” when the Eagles won the Super Bowl.

“It means everything,” Gallen said. “We’re loving it.”

At the rally, Lurie, Pederson and a slew of players all took the microphone and dedicated Sunday’s victory to the fans.

But it was the crowd-pleasing Kelce who best channeled the gruff but ultimately good-hearted “attytood” for which Philadelphians are famous.

Wearing an outlandishly sequined Mummers getup — a nod to Philadelphia’s raucous New Year’s Day parade — Kelce declared that “no one wanted us. No analyst liked to see us win the Super Bowl. And nobody likes our fans.”

Police investigated at least two stabbings on parade day, including one man stabbed inside a mall just off the route. No details about his condition were released. A second man was taken to a hospital with a stab wound, and police said they were trying to piece together what happened. City officials said they wouldn’t have arrest numbers until Friday.

The parade was overwhelmingly peaceful, though, giving fans an emotional release after decades of disappointment.

For lots of fans, the parade was a reminder of the Phillies’ victory lap after a 28-year World Series title drought.

For others, it took on spiritual shades of the pope’s visit in 2015.

“It is like a religion,” said Kevin Fry, 37, of Prospect Park in suburban Philadelphia, a press operator at the Inquirer and Daily News who helped print 700,000 copies of the Super Bowl edition that proclaimed “At Last!”

And for Natasha Curley, 31, a janitor from Trenton, New Jersey, the Super Bowl title means that rival fans can stop their yapping — at least till next season.

“This stops all the hate,” Curley said. “They got nothing to say now.”