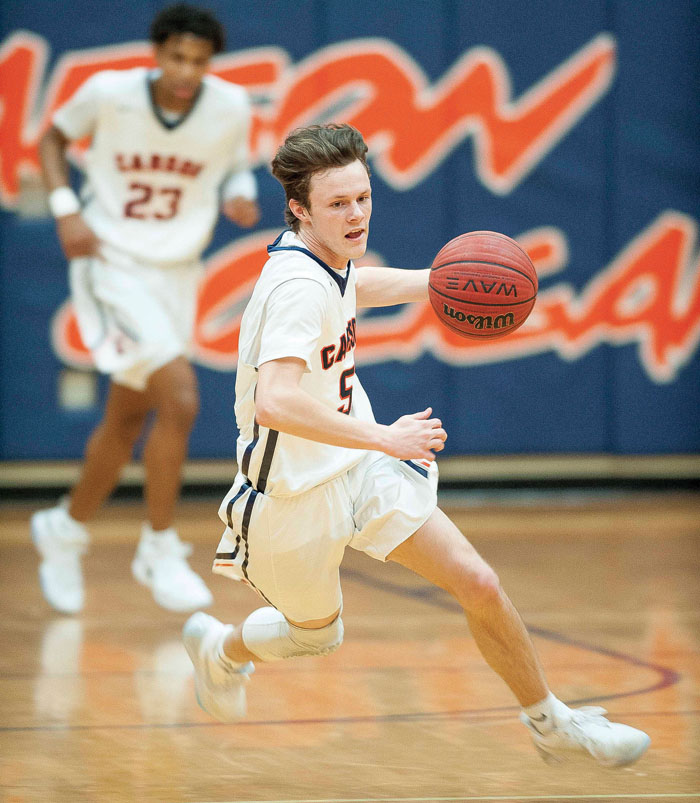 The Cougars needed — and received — a rocket-fueled performance against visiting South Iredell, winning, 98-80, to capture the North Piedmont Conference championship.

“Championship week is over, man,” coach Brian Perry exhaled after Carson took its regular-season finale and claimed its first league title in the school’s 12-year existence. “We did what we needed to do.”

Carson (21-2, 9-1) avenged its only conference setback, earned its sixth consecutive victory and secured the No. 1 seed in next week’s conference tournament at South Iredell. Forward Jamarius Hairston, one of six seniors recognized before the opening tip, poured in 29 points and seemingly willed the Cougars to an exhilarating comeback win.

“We came out and got it done,” he said. “It’s a great feeling to get a win like this one. We’re all very proud of each other.”

South Iredell coach Mike Dodson said Carson was simply more opportunistic than it was when the teams first met in a 77-75 Vikings’ triumph on Jan. 24.

“We made more plays that night,” he said, after the Vikings (17-6, 7-3) had a four-game win streak snapped. “They made more plays tonight. There’s a reason they’ve only lost twice all season.”

Carson stuck to the bombs-away approach that has worked all winter. It knocked down 11 3-pointers, including seven in the momentum-swinging second quarter. But in the first, South Iredell served the Cougars a glass of their own Kool Aid — draining six 3-balls and and racing to a 30-19 lead.

“We were comfortable with the up-tempo pace,” said Carson’s Jailen Williams. “We were just giving up too many points. Most of them came on drives to the basket and kick-outs to their shooters.”

Three of them were stroked by South’s Greg Liechty, a junior left-hander who scored nine of his 16 points in the opening three minutes.

“He’s been a shooter all season,” Dodson said. “He’s one of the guys we look to get the ball to so he can catch-and-shoot. He was on fire tonight.”

Senior guard Cam Prugh helped Carson pull within 40-39 when he drained three straight 3-pointers, the last on a heat-seeking missile from the right corner with 3:25 remaining in the half.

“Before the game, Jailen’s dad told me I needed to pick up the slack,” said Prugh, who suffered a strained right achilles on a fourth-quarter traveling call. “Obviously, I didn’t want to disappoint him.”

Carson took its first lead late in the half when Williams scored on a scoop layup and owned a 52-47 advantage when Owen White alertly swiped an offensive rebound and hit a put-back as the half ticked to a close.

“The guys responded,” Perry said. “After we gave up 30 in the first quarter, they came over to the bench and were getting at each other a little bit. Then Owen went down there and stuck it in at the buzzer, which gave us a little extra momentum. Cam’s 3-pointers were huge — they kept us in it. It seemed like our guys played with guts tonight. They kept in the fight.”

Hairston won the battle with a 17-point second half. His underhanded layup-and-one put the Cougars ahead, 68-64, late in the third quarter before back-to-back, highlight-reel baskets salted the game away. The first came with 4:25 to play, when he stole a pass and dribbled the length of the court for a layup that made it 85-71. Thirty seconds later, he capped an 8-0 Carson run with an industrial-strength dunk.

“I think South Iredell was getting a little tired,” Perry said. “And Jamarius picked up on it. He made two really nice plays in a row to give us some separation. I’m glad it turned like this. It was one of those game you remember because it was played at such a high level. We had so much going for us.”

By the final horn, Carson owned the Vikings, the crowd’s heart and the conference championship.

NOTES: Prugh equaled his season-high with 16 points, all in the first half. … The teams combined for 22 3-pointers, though none were recorded in the fourth quarter. … Carson set a school record for points in a game — breaking the mark of 94, set Tuesday at West Rowan. It matched its record for victories in a season, established eight years ago. … The Cougars improved to 10-0 at home while South Iredell fell to 6-5 on the road. … Carson gets an opening-round bye in the conference tournament. It will meet the East Rowan-West Rowan winner in a semifinal on Wednesday.