‘Speed demon’ Will Fuller doesn’t let wheelchair slow him down 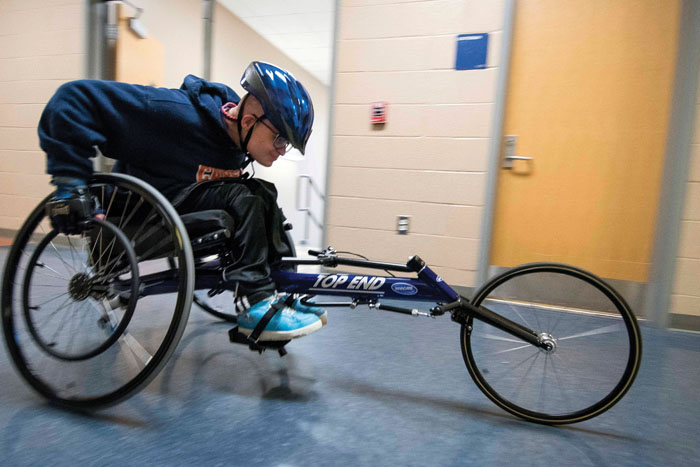 Carson High School sophomore Will Fuller practices with coach Ashleigh Kirkpatrick in one of the back hallways of the school at the end of the day. Fuller will compete in the wheelchair events in the Indoor track competitions this weekend. Jon C. Lakey/Salisbury Post

CHINA GROVE — Will Fuller is something of a daredevil. Even as a child, his mother, Josie Boone, said he loved to jump off beds and tables, despite the braces on his legs or screws in his ankles.

“He thought he could do everything that his brother, his sisters could do — and they were 10 years older,” Boone recalled.

Now a high school sophomore, Fuller gets his thrills from another source: speed.

These days, Will is in a wheelchair because of spina bifida, a birth defect in which the spinal column fails to fuse closed. But that doesn’t stop him from racing.

For the past two years, Will has competed in indoor and outdoor 3A state track meets for wheelchair. As a freshman, he took home the state championship title in the 100-meter dash and discus throw, and he placed second in shot put.

When he lines up to race in his wheelchair, he’s ready to go.

“He gets going so fast,” Kirkpatrick said.

Will said he was inspired to compete by a close friend, Taylor Kirk. Kirk, a student at East Rowan High School, held the state championship title for wheelchair shot put for several years running. She passed away in 2017.

But her fire and determination was catching and pushed Will to compete in the sports, as well. When he approached indoor track coach Berry Mitchim about it, Mitchim told him that he’d take Will on — as long as he promised to go all the way to state competition.

Mitchim was a tough coach.

“Berry had him out there last year throwing medicine balls — even when the weather wasn’t so good,” Kirkpatrick said.

Will had to prove that he could push his wheelchair fast in the grass before he was allowed on the track itself.

But Will was never one to let anything hold him back from his goals. In his practice with the outdoor track team, Kirkpatrick said, he will do burpees like the rest of the team — pushing off the wall and then rolling his wheelchair back in.

“He does exactly what the other kids do. … He pushes himself hard, and we’re proud of him,” she said.

It’s a mindset Will has had his whole life, his mother said.

“When he was little, we told him he could do whatever he wanted to do — he would just have to figure out how to do it,” Boone said.

Sometimes, that has led to interesting ideas — such as the day Will went out and bought football gear, determined to play.

“Will came over to me and said, ‘I’m going to be on the football team,’” DelliSanti recalled.

Will never did join the football team, but he went out for track instead. And there, he found a home. Boone said his track teammates are protective of him and even run with him in events if they’re able.

“At county, they couldn’t run with him, so they ran in the grass beside him all the way up,” she said.

Will brings his own spark to the team. Kirkpatrick said he never gives up and always wants just a few more minutes of practice, even when the weather is bad.

“He pushes the other kids to keep going — keep running — because he’s right beside them,” she said.

Now, the teen is stepping up his game yet again. Will recently got a new specialized racing wheelchair.

“It looks kind of like a drag race car,” coach Jason Stanley said.

Will first saw one of the chairs at last year’s competition, and he and Boone immediately decided he needed one.

“He’s going to have it — one way or another, we’re going to get it,” she told herself.

Boone started a GoFundMe page to pay for the chair, which cost more than $2,500. But efforts to raise money took off elsewhere, too. DelliSanti and students at Carson began their own fundraising campaign. A lot of it, DelliSanti said, was run over social media.

“You know, 14-year-olds who don’t have money were tweeting this. … I was really proud of our community,” he said.

Together — and thanks to an anonymous $1,000 donation — the community raised enough to purchase the chair.

This year, Will is hoping to match Taylor Kirk’s records and place first in shot put — as well as in his other events.

And when he’s older?

“I want to come back to high school and be a track coach,” he said.