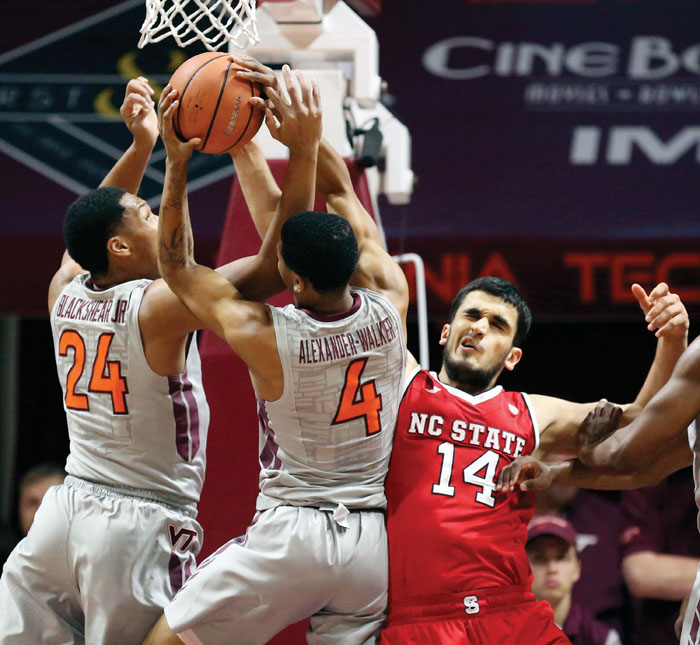 Robinson connected on 11 of 17 from the floor, including two 3-pointers, for the Hokies (17-7, 6-5 ACC), who bounced back from Saturday’s loss to Miami and have now won four of their past five games. Kerry Blackshear Jr. added 18 points for Virginia Tech.

Coming off an 84-75 loss to the Hurricanes — their third ACC loss at home this season — the Hokies responded by shooting a sizzling 63.5 percent from the floor (33 of 52). That field-goal percentage was Virginia Tech’s best against an ACC foe this season.

Virginia Tech took control in the first half, using a 16-3 run and taking a 41-26 lead on Robinson’s basket with 2:55 left in the half. The Hokies shot 64.5 percent in the first half (20 of 31) despite making just one 3-pointer and led 47-34 at halftime — the second-most points allowed by NC State in a half this season.

The Wolfpack (16-8, 6-5), who had four wins over teams in the top 20 of the Ratings Percentage Index (RPI) coming in, saw their three-game winning streak snapped and lost for just the third time this season when scoring more than 70 points. They trailed the entire second half, coming as close as 61-55 on a 3-pointer by Sam Hunt with 10:52 remaining, but getting no closer than seven the rest of the way.

Very little went right for the Wolfpack, as they committed 15 turnovers and shot just 43.5 percent (27 of 62), but the bigger issue was first-half foul trouble to top scorer Omer Yurtseven, who picked up two fouls less than five minutes into the game and sat for the next 9:46. The 7-footer returned to the game with the Wolfpack trailing by 12, but less than two minutes later, picked up his third foul and returned to the bench.

Yurtseven led the Wolfpack with 20 points, while Markell Johnson added 15 points and 10 assists. Torin Dorn, the Wolfpack’s second-leading scorer coming in at 13.4 points per game, finished with just four and saw his streak of scoring in double figures end at six games.

NC State: The Wolfpack still have opportunities to bolster their NCAA Tournament chances, but they desperately need to improve their defense down the stretch. They have the ACC’s worst field-goal percentage defense, and it showed against Virginia Tech, which constantly drove to the basket and scored with ease.

Virginia Tech: The Hokies could not afford to lose another league home game, especially considering their tough late-season slate, and didn’t. For the time being, they’re in the NCAA Tournament discussion, but they have arguably the league’s toughest remaining schedule, with two games against Duke and one each against Virginia, Clemson and Louisville.

NC State: The Wolfpack returns home for a rematch against North Carolina on Saturday. NC State knocked off the Tar Heels in Chapel Hill on Jan. 27.

Virginia Tech: The Hokies play at rival Virginia on Saturday — and the Cavaliers will have the extra motivation of possibly moving to No. 1 in the Associated Press poll next week following Villanova’s loss Wednesday night.

PHILADELPHIA (AP) — St. John’s took down another of the nation’s elite, and stunned No. 1 Villanova 79-75 on Wednesday night for its second win over a top-five team this week — and first over the top-ranked team in 33 years.

Shamorie Ponds scored 26 points to spark the Red Storm (12-13, 1-11 Big East) to their first conference win of the season and easily their best week since Chris Mullin was in uniform, not the coach.

Mullin played for St. John’s when it beat No. 1 Georgetown 66-65 on Jan. 26, 1985. And he was on the sideline exhorting his players in the final minutes of this shocker.

The Wildcats (22-2, 9-2) ended a nine-game winning streak and will surely tumble from the top of the national rankings, where they’ve spent the last five weeks at No. 1.

Kyle Guy scored 10 of his 13 points in the final 20 minutes as the Cavaliers fought back from a 32-22 halftime deficit to remain unbeaten in the Atlantic Coast Conference. Virginia was 5 of 10 on 3-pointers in the second half and committed just one turnover.

Florida State had two stretches over the final 26 minutes where it went over five minutes without making a field goal — including the final 9:01 of the game. The Seminoles shot 40 percent from the field (18 of 45) and made only two of their last 12.

Carsen Edwards finished with a career-high 28 points to lead the Boilermakers (23-3, 12-1), who lost for the first time since Nov. 23.  Isaac Haas had 18 points but missed an 8-foot jumper at the buzzer to win it.

Texas Tech freshman Zhaire Smith scored a career-high 21 points, including a steal that led to his alley-oop slam, and the Red Raiders beat Iowa State.

After Iowa State (12-11, 3-8 Big 12) had scored seven straight points in a 77-second span to get within one point after halftime, Smith had a steal. He passed the ball on the break to Jarrett Culver, who then lobbed up the pass that resulted in Smith’s two-handed slam.

NASHVILLE, Tenn. (AP) — Jeff Roberson and Riley LaChance have carried much of the scoring load for Vanderbilt lately.

But the 1,000-career-point scorers got some help as five Commodores broke into double figures in an 81-66 win over struggling Georgia on Wednesday night.

“As a coach, I love it when we have four or five guys in double figures,” Commodores coach Bryce Drew said. “We haven’t had the luxury pretty much all year. Lately, Jeff has been having big nights or Riley or both of them and no one else, and it’s nice that we had five guys (in double figures).”

AUSTIN, Texas (AP) — Kansas State limped into Texas on the heels of an ego-crushing 38-point road loss that would have sucked the life from many teams.

If anything, the Wildcats looked ready to lay down against a Texas Longhorns team that had played their best on their home court and were brimming with confidence for a second-half run in the Big 12. Instead, Kansas State slugged out a rugged 67-64 comeback road victory that is rare to come by in one of the best leagues in the country.

Dean Wade scored 16 points to lead five Wildcats scoring in double figures, and made one of two free throws in the finals seconds that helped seal the victory.

DURHAM (AP) — Lexie Brown scored 21 points, six combing in the last 2½ minutes, and No. 19 Duke turned back Wake Forest 59-51 on Wednesday night in the first game since injured starter Haley Gorecki was lost for the season.

Gorecki, a 6-foot sophomore guard, was sidelined with a left hip injury after playing just nine minutes in the Blue Devils’ last game and missing the game before that. She was averaging 17.1 points, 5.4 rebounds and 4.0 assists in the 11 games since becoming a starter.

Earlier in her career she missed a year-and-a-half with a right hip injury.

The Blue Devils made 8 of 13 shots in the final quarter and Wake Forest 4 of 13 with four turnovers.

Wade missed a second free throw that would have given the Wildcats a four-point cushion, but Texas’ final shot, a stumbling, off-balance 3-pointer by Kerwin Roach II, never came close to the basket.

“We came and we fought,” said Kansas State guard Barry Brown, who had 11 points and six assists. “Wins like this build character.”

Kansas State (17-7, 6-5) trailed 54-52 before taking the lead for good on a 3-pointer by Cartier Diarra, who followed it with a steal and a layup for a 57-54 lead the Wildcats never relinquished.

Texas (15-9, 5-6) got within 66-64 on a 3-pointer by Eric Davis with 44 seconds left. The Longhorns had a chance to tie but Matt Coleman turned it over on a desperate drive to the basket with 3 seconds left on the play that sent Wade to the free throw line. Coleman said he was trying to lob the ball to Mo Bamba for a dunk.

“I should have just laid it up,” Coleman said.

Texas had protected its home court well after losing its conference opener, including three wins over ranked opponents, an impressive run that was key to building a solid postseason resume.

Against Kansas State, Texas allowed the Wildcats to shoot 54 percent and made just 8 of 29 3-pointers. Bamba, one of the top freshmen in the country, scored 18 points to go with 12 rebounds, but scored just three points in the second half and took only four shots after halftime.

“They kept switching where they were doubling from,” Bamba said. “I couldn’t get a feel for where it was coming from.”

Texas coach Shaka Smart was fuming over what he called a lack of effort by his team.

“It’s going to be a very honest and aggressive film session (Thursday),” Smart said. “It hurts a lot. I hope it hurts the guys as much as it hurts me. When that happens, you’ve got to be a big boy and find out how to win the next one.”

Kansas State: The Wildcats shook off some of their offensive struggles of late. Their 14 field goals in the first half matched their total for the game in a blowout loss at West Virginia over the weekend. Wade was fearless in the middle against Bamba, who is one of the country’s premiere shot blockers. Yet the Wildcats still were held under 70 points for the third fourth consecutive game.

“They are really long, really big, but you can’t not be aggressive,” Wade said.

Texas: Texas lacked the offensive punch it usually gets from Dylan Osetkowski and Roach, two of their most dependable scorers. Both were scoreless in the first half. Osetkowski finished with 8 points and Roach was 2 of 10 shooting.

“Right now, he’s questioning himself on things and it’s causing him to be hesitant,” Smart said.

After Davis’ 3-pointer, Texas still had enough time to get a stop and a possible shot at a game winner. But Roach fouled with just 7 seconds left on the shot clock and 18 seconds in the game. Because Texas had only three fouls in the half, the Wildcats had to get the ball inbounds four times without turning it over and Bamba’s long arms covering the passer.

Texas fouled so quickly the Wildcats were only able to trim 2 seconds off the clock. Brown finally got to the line, but missed his free throw, which set up the frantic last few seconds.

“They kept their poise. To get the ball in four times like that is not easy,” Kansas State coach Bruce Weber said.

Texas plays at TCU on Saturday in a rematch of a double-overtime game Texas won when the Horned Frogs missed a layup at the buzzer.