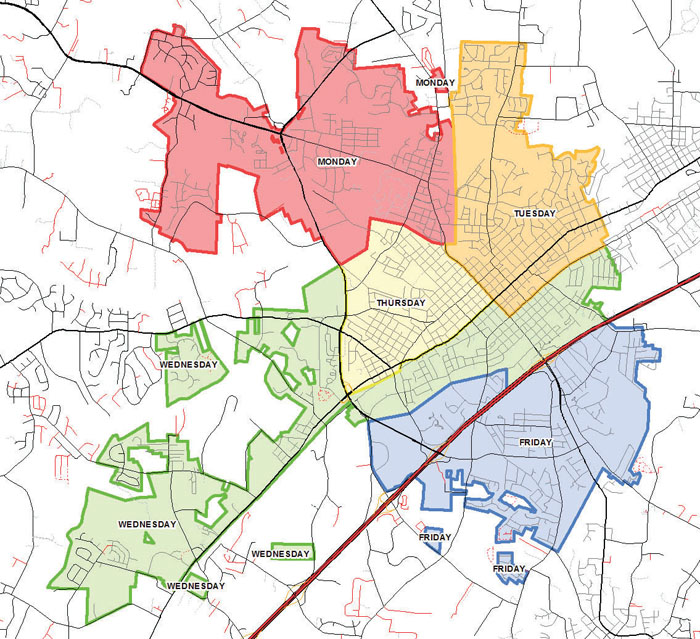 City of salisbury A new garbage collection schedule has been in place for the city for about a month.

SALISBURY — At the Wednesday meeting of the Community Appearance Commission, city Public Services Director Tony Cinquemani and Assistant Director Craig Powers talked about the successes and setbacks of the first month of the city’s new solid waste collection policies. Commission members talked back.

Powers said that since Jan. 1, the Public Services Department has begun “consistently” following solid waste ordinances — something he said it had not done in the past when it comes to bulky items.

“We would try to pick up a little bit extra outside of the can. We were trying to do that because we were wanting to be nice. I mean, that’s why. We wanted to provide that extra customer service,” Powers said.

“Was it one bag or two bags? Was it one mattress or was it three mattresses?” Powers said. “Your government doesn’t want to be inconsistent with how (we) collect things.”

But the department’s push for consistency has left some residents, like commission member Shelley Palmer, upset.

“I’ll just be real upfront,” Palmer said. “I’m not a fan of the new policy and not a fan of how, for lack of a better word, trashy our neighborhood looks.”

Palmer, who is a resident of Fulton Heights, said she has seen dozens of places within a quarter mile of her house that have trash and code violations in the past month.

“Now I know we had snow one of those weeks, but (there’s) furniture on the curb, mattresses on the curb,” Palmer said. “I’ve made a hobby of following trash trucks in the last month, and if the arm goes up and over and drops a bag it just keeps going.”

Palmer said one cardboard box beside a trash can is considered a bulky item and is not picked up without an appointment.

“This is a new process,” Cinquemani responded.

“We have actually been telling folks for well over a year to call in bulky stuff and saying that there’s a process and it’ll have to be paid for soon,” Cinquemani said. “And as I said, this is a process and we are trying to find out the best way to get it all up. But it’ll be taken care of.”

Powers said the Public Services Department has received both positive and negative feedback about the new practices. He said 32 people have requested bulky item pickup so far this year.

Powers said the city’s fall and spring “spruce-ups” will still happen. During those weeks, bulky items will be collected at no charge and without scheduling.

For all other times, people who have bulky items — which is anything left outside city-issued rollouts — must call 704-638-5260 to schedule an appointment to have the items picked up.

Collection fees are as follows:

There is a $10 minimum charge for pickup.