Philadelphia gears up to shut down for Eagles parade 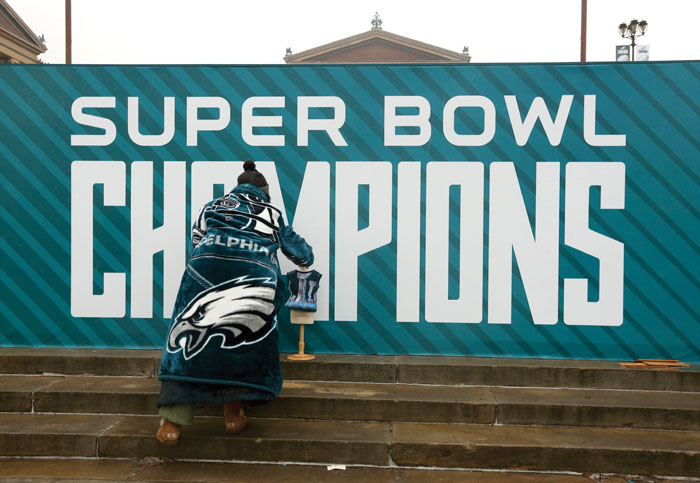 Philadelphia Eagles fan and fashion designer Nancy Volpe Beringer places a small dressmaker's form with an outfit she says she made and would like to give Eagles' Nick Foles daughter, Lily, on the steps of the Philadelphia Museum of Art, Wednesday Feb. 7, 2018, in Philadelphia. A parade and celebration honoring the Eagles' Super Bowl victory over the New England Patriots is scheduled for Thursday. (AP Photo/Jacqueline Larma)

PHILADELPHIA (AP) — The city is gearing up and shutting down for its first-ever Super Bowl parade, with universities, schools and government offices all shuttering and mass transit being shifted to serve the needs of parade-going Eagles fans.

Museums, city courts and even the Philadelphia Zoo will close as Philadelphia focuses on Thursday’s celebrations. Visitors who might be in town for reasons other than feting Sunday’s 41-33 win over the New England Patriots will still be able to visit places like Independence Hall and the Liberty Bell.

The parade starts near the team’s stadium and ends its 5-mile trek at the art museum steps that Sylvester Stallone climbed in the “Rocky” movies — a fitting finish for a team seen as the underdog, just like the fictional fighter.

Organizers said they’re preparing for as many as 2 million people to jam the parade route. No official estimate was released for the parade after the Phillies won the World Series in 2008, but crowd assessment experts have said that likely didn’t exceed 750,000.

The city doesn’t plan to make any crowd estimates for this parade.

Mayor Jim Kenney called on fans to celebrate with passion and pride, again referring to those who committed violence and vandalism late Sunday as “knuckleheads.”

“Now remember — act responsibly, don’t ruin this for the fans who have waited decades for what will be a historic day as the Eagles finally parade up Broad Street. We are after all the city of brotherly love and sisterly affection.”

The parade has also touched off a bit of a beer war.

Bud Light will offer free beers to revelers at two dozen bars along the parade route, thanks to a promise its brewer made to Eagles offensive tackle Lane Johnson before the season.

Not wanting to be upstaged by an out-of-towner, Philadelphia-based Yards Brewing said it will offer fans a free Philly Pale Ale on parade day in the brewery’s taproom.

“We might not be able to get everyone a beer but we can try,” they tweeted .

The city’s two subways will be free all day, but groupies coming in from the suburbs might have a trickier time getting into the city.

All 50,000 special parade day tickets for the regional railroad lines were sold out as of 1 p.m., said Andrew Busch, a spokesman for Southeastern Pennsylvania Transportation Authority. Weekly and month passes are valid, however.

The rapid-transit system connecting Philadelphia and southern New Jersey planned to stop selling tickets by early Wednesday night for those wishing to take the commuter line to the parade.

Meanwhile, working off surveillance video, social media posts and eyewitness accounts, police announced Wednesday they had made at least eight arrests stemming from the violence and vandalism that occurred during street celebrations late Sunday and early Monday.

Among those arrested were a 28-year-old man accused of assaulting an Associated Press photographer who was taking pictures of street celebrations and vandalism near City Hall, and a 20-year-old who police say was one of seven men seen flipping a car onto its side. Police said the photographer was hit in the face with his camera and punched a number of times in in the head, suffering cuts, bruises and other injuries.

In a tweet , the department urged those involved the postgame mayhem to turn themselves in.

“What I don’t understand is how dumb people can really be,” the mayor said. “These days, everything’s videotaped, and not only is it videotaped on security cameras, it’s videotaped by themselves and their friends and they post it on social media. So, I mean, you put your own wanted poster out on social media for all to see.”