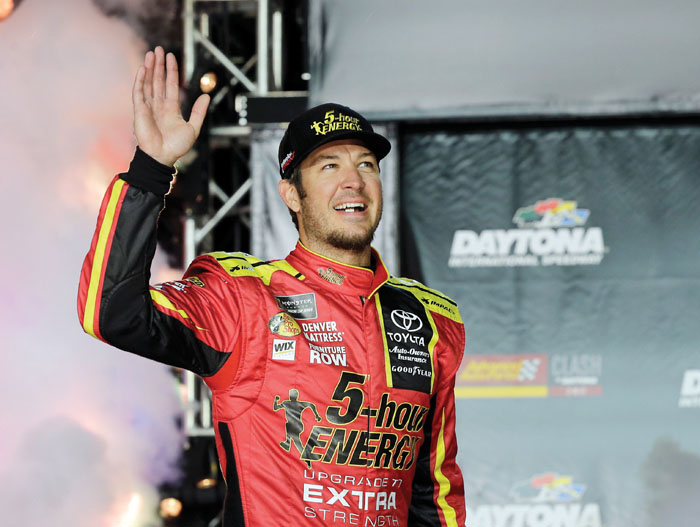 FILE - In this Feb. 18, 2017, file photo, Martin Truex Jr. waves to fans during driver introductions for the NASCAR Clash auto race at Daytona International Speedway, in Daytona Beach, Fla. Martin Truex Jr. has been all over the country during his brief reign as NASCAR's newest champion. Truex will get back behind the wheel of his No. 78 Toyota this weekend at Daytona International Speedway and he'll race Sunday in an exhibition all-star event. It will be the first look at the Colorado-based Furniture Row Racing team since it manhandled the competition all last year. (AP Photo/Terry Renna, File)

CHARLOTTE (AP) — Martin Truex Jr. has been all over the country during his brief reign as NASCAR’s newest champion.

It was the final party for Truex, who goes back to work this week along with the rest of NASCAR to get ready for the 2018 season. The season-opening Daytona 500 is Feb. 18, and qualifying for “The Great American Race” is Sunday.

Truex will get back behind the wheel of his No. 78 Toyota at Daytona International Speedway and race in an exhibition all-star event Sunday. It will be the first look at the Colorado-based Furniture Row Racing team since it manhandled the competition most of last year.

Truex led nearly every statistical category in 2017, including notching a series-leading eight victories.

“I feel zero pressure about starting the new season,” Truex said. “We’re comfortable in what we are doing and having a lot of fun at the same time.”

Truex doesn’t have a teammate this year as Furniture Row moves back to a one-car operation. The change is one of the small ripples in a major wave that affected the NASCAR landscape.

Erik Jones, who had been on loan to Furniture Row, moved to Joe Gibbs Racing. To make room for Jones, JGR had to bounce Matt Kenseth from his ride even though the two-time Daytona 500 winner didn’t really want to retire.

Kenseth wasn’t alone: Danica Patrick lost her ride, making the Daytona 500 her final NASCAR race, and Kasey Kahne was forced out at Hendrick Motorsports and took a lesser job with Leavine Family Racing that created decent upheaval among the mid-pack racers.

Dale Earnhardt Jr. retired at the end of last season, but will still have a very heavy NASCAR presence. He will serve as grand marshal for the Daytona 500, will be part of NBC’s broadcast team and has been very clear he wants to be part of NASCAR’s future in a non-driving role.

Elliott spent the past two years driving the No. 24 but is switching to the No. 9 — the number his Hall of Fame father donned for most of his career. Before Earnhardt Jr. locked down NASCAR’s most popular driver award, Bill Elliott owned the category. With Chase Elliott now in the No. 9 Chevrolet, fans may flock to his camp.

But Elliott is out to win races and not a popularity contest. Entering his third season in the Cup Series, he’s still seeking his first victory.

“Not everybody liked Dale. That’s just the facts. Most people did. The majority did. But a lot of other people have other drivers, too.  It’s not just about one person.”

Team Penske has expanded to three cars to add Ryan Blaney to its lineup, and he’s already a hit with fans. Close friend Bubba Wallace got a promotion to the Cup Series this season and will drive for Richard Petty Motorsports.

Wallace is the first black driver to win a national series NASCAR race since 1963. Jones and Daniel Suarez, the only Mexican driver in the Cup Series, make up the other half of Gibbs’ lineup.

The grid is getting younger and younger, and there’s been disagreement among veteran drivers about NASCAR’s push to spotlight the fresh faces.

The fans will be the big winners this year because the younger drivers are more accessible, and the veterans are aware of the need for increased fan engagement.

Wallace said newer drivers have to build brands and find sponsorship, unlike drivers of the past two decades, when fully-funded rides were far easier for no-name drivers to nab on the promise of future success.

“I have 13 (sponsored) races, so I have to put myself out there. I have to sell myself,” Wallace said.

Funding is an issue across all motorsports, and NASCAR’s teams are scratching their heads as they rework budgets.

Very few drivers have just one primary sponsor anymore; most split their season between dozens of brands in various funding roles, and some drivers have to bring their own money just to get a return call on a mediocre ride.

NASCAR is in its own sponsorship watch, too.

It’s the second season of Monster’s entitlement sponsorship of the Cup Series, but there’s been near silence from the company on its future in the sport.

Monster had a splashy debut race in which Monster-sponsored driver Kurt Busch won the Daytona 500, and that race alone was a massive return on its investment. Monster is back on both Busch’s car and as the series sponsor, but interest beyond 2018 is unknown.

NASCAR made a behind-the-scenes move before the season when Ben Kennedy, great-grandson of NASCAR founder Bill France Sr., stopped racing and became the company’s general manager of the Truck Series.

It’s an obvious entry point for Kennedy to join the family business, and a sign that NASCAR chairman Brian France and ISC head Lesa France Kennedy are aware that ownership may be in need of a youth movement as well.

“Ben will draw upon his years of experience across NASCAR’s grassroots and national series,” NASCAR president Brent Dewar said.

“With promising young drivers and experienced veterans battling it out in close, side-by-side racing, Ben truly understands from experience that every lap matters and we are excited about his future leadership in this important national series.”