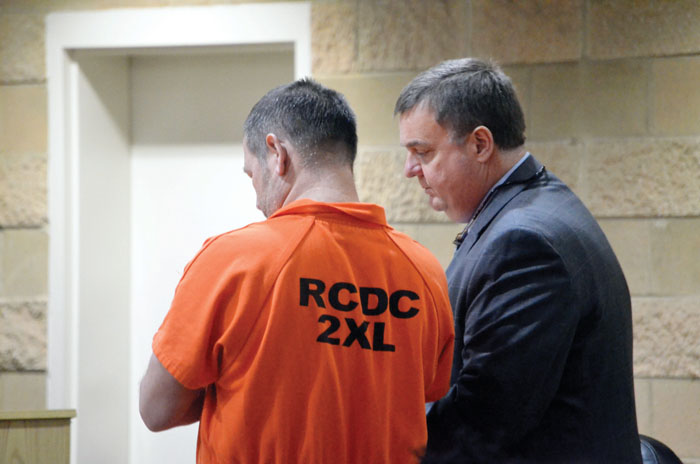 Athey, 51, was charged with robbing the F&M Bank at 418 W. Main St. on Tuesday afternoon. He was arrested during a traffic stop after a description of his silver older-model Ford Mustang was issued.

Authorities said Athey walked into the bank wearing a gray Harley-Davidson T-shirt, jeans and sunglasses. He asked a teller for $1,000 and “she gave him what he asked for,” said Rockwell Police Chief Hugh Bost.

Athey didn’t wear a mask or gloves and didn’t hand the teller a note, police said. He just said he needed $1,000.

Bank employees were able to give a good description of Athey and his vehicle, police said.

A Rowan County sheriff’s deputy who was in the area heard the vehicle description, saw the car in the opposite direction and turned around. Bost said Athey did not try to flee but simply pulled over. A vehicle was in front of him, so he wasn’t able to go anywhere else.

“He complied and did not give us any problems. When they asked him to step out of the vehicle, he did,” Bost said.

Bost said Wednesday that his investigators are still trying to determine what would lead a veteran law enforcement officer to commit a federal crime.

“We don’t have a clue why he did this. It doesn’t make sense. We are still trying to find a motive,” Bost said.

Athey requested a court-appointed attorney. Darrin Jordan of Salisbury was assigned to the case.

He is expected back in court Feb. 28 for a probable cause hearing.

Chief Bost said officers are still working to get surveillance video from the bank, collect evidence and obtain witness statements.

He said they spoke with Athey’s co-workers, who said he got married about a year ago but they weren’t aware of any problems in his marriage.

Davidson County Sheriff David Grice said he learned of the robbery and Athey’s alleged role about 4:30 p.m. Tuesday and then fired him.

Grice said Athey worked with his department from May 2002 until March 2007 then left to work for the private military company formerly known as Blackwater. He returned to the Davidson County Sheriff’s Office in August 2013, where he worked until his termination.

Athey worked as a patrol officer and a transport officer taking prisoners to jail and served civil court papers as well as commitment orders.

Grice declined to comment about any disciplinary action that Athey faced while with his department, saying that is a personnel matter.

He did say that Athey was in good standing at the agency.

“He was always polite to me and very diligent about his job and came in on time. A lot of people up here that interacted with him are perplexed as to why he was involved in this behavior,” Grice said.

He said he hopes that people don’t judge all law enforcement officers by Athey’s behavior.

The last time a bank was robbed in Rockwell was June 29, 2016. Authorities caught the suspect within 10 minutes a block away on foot. Before that, there had not been a bank robbery in the town in decades, Bost said.