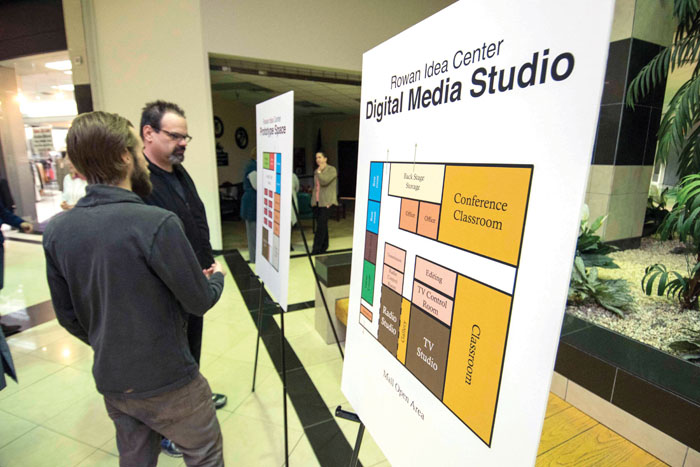 SALISBURY — Evidence that the entrepreneurial spirit is alive and well filled the chairs Wednesday evening at the Rowan IDEA Center’s open house and first workshop in West End Plaza.

Former South Carolina firefighter Aaron Davis wants to open a custom firearms shop. Ohio transplants Mark and Rebecca Wells plan to get into the tool and dye business. John Helms has launched American Trailers of the Carolinas, located near the Daimler Trucks plant.

After working in Charlotte for eight years, Leigh Ann Loeblein is exploring the idea of opening her own landscape design and home organizing firm in Salisbury.

And high school sophomore Tyler Sheets has developed a prototype for an insulated dog bowl.

Those were some of the ideas represented as the Rowan County Chamber of Commerce kicked off the IDEA Center — short for innovation, development, entrepreneurship and acceleration.

A joint effort among academia, business and government, the center is aimed at helping Rowan residents successfully launch new businesses — and in the process improve the Rowan County economy.

“It’s about growing our own,” said chamber President Elaine Spalding as local leaders and business people filled the large room, set up classroom style near the center of the former Salisbury Mall.

The IDEA Center is turning unused retail space into a  business incubator, venture lab and more, Spalding said, with the goal of helping people start new businesses on firm footing. Organizers believe the initiative will help increase the county’s per capita income.

When fully fleshed out, the center will include a co-working center, a digital media studio and a prototype center, which will house 3D printers and other equipment for developing models.

More than 30 men and women filled the chairs for the center’s first workshop, Fundamentals of Entrepreneurship in Five Key Lessons. Registration for the workshop was high.

“That means people are hungry to learn how to start their own business,” said Greg Edds, chairman of the Rowan County Board of Commissioners.

“When communities start reaching out to them and offering opportunities, folks are more likely to stay and invest,” he said. “They realize they are the opportunity. …

“It’s a big opportunity for us to retain our kids and their families.”

The county gave the chamber $145,000 to fund Phase I of the IDEA Center’s development. Addison Davis is the project manager, and Mikey Wetzel chairs the center’s board.

In addition to Edds, public officials at the open house included Judy Klusman of the county commissioners, David Post and Karen Alexander from Salisbury City Council, and Josh Wagner, chairman of the Rowan-Salisbury Board of Education.

Livingstone, Catawba College and Rowan-Cabarrus Community College are involved in the IDEA Center, and a representative of the N.C. Research Campus in Kannapolis also attended the open house.

Tony Almeida, business and community liaison for the Research Campus, said campus leaders were ary interested in partnering with the IDEA Center. After researchers develop products, they have to find a way to to make them viable.

“Commercialization is our next big strategy focus,” Almeida said.

There’s a high school link, too. RCCC staff member Brad Holda, who is working as a career coach at South Rowan High School, brought two students who will participate in an upcoming business pitch contest.

South freshman Nick Corriveau has started buying, fixing and reselling iPhones. “I need to start thinking more about numbers and growth,” Corriveau said after the workshop.

South sophomore Tyler Sheets said he will be working to take the next step after developing a better dog bowl.

Wes Bray and Mickey Goodman of E2Advisors in Hilton Head, South Carolina,  first suggested Rowan establish what became the IDEA Center. They led the evening’s workshop, an outline of the basic steps a person should go through to launch a business.

Don’t go it alone. Know that the majority of new businesses fail. Try to kill your product (and see if it survives). Get help from mentors and workshops. Have a passion for what you’re doing.

Participants left with lots to think about.

Loeblein also left with a spirit of optimism about the center.

“I’m excited for Salisbury and Rowan County,” she said.

With the help of the IDEA Center, she said, more people could be able to realize their dreams of what they can do.