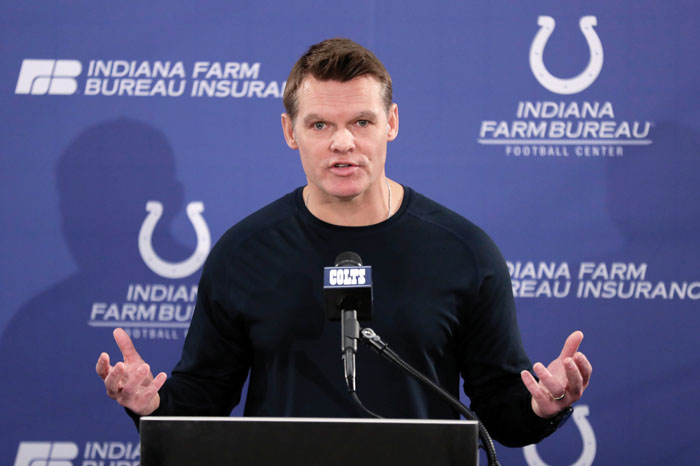 INDIANAPOLIS (AP) — Colts general manager Chis Ballard showed up for a news conference Wednesday — just not the one he expected.

Instead of introducing Josh McDaniels as the team’s new head coach, Ballard stood in front of reporters trying to explain why New England’s longtime offensive coordinator reneged on a deal he initially accepted.

But if Ballard’s disgust about losing his top choice wasn’t clear from the occasional glare or the strong pitch in his voice, he left no doubt with one parting shot.

“The rivalry is back on,” he said before leaving.

Conducting a coaching search in February isn’t what Ballard or Indy envisioned when Chuck Pagano was fired just hours after Indy completed a 4-12 season on Dec. 31.

Exactly 24 hours after announcing McDaniels’ hiring on the team’s Twitter account and roughly 16 hours after he called back to tell Ballard he was out, the search begins anew for the jilted Colts.

Their other finalist, Mike Vrabel, has already taken the Tennessee job. Another top-tier candidate, Mike Nagy, has already been hired in Chicago. Baylor coach Matt Rhule, who also interviewed for the job, is back on campus getting ready for spring football. And it’s unclear where the Colts may turn next.

“We have a list of candidates, I’ve had them from the get-go,” Ballard said. “There are other guys we wanted to interview, but because of the playoffs, we weren’t able to.

“We’ll move forward with them and we will get the right leader for the Indianapolis Colts — one that believes what we believe and wants to go where we want to go. I’m very confident in this.”

Ballard didn’t name names, of course, nor did he provide a timetable.

Oddly, the timing could present Indy with a unique opportunity to pick off a candidate who might emerge as a top candidate on next year’s coaching carousel.

Several possibilities exist including Philadelphia Eagles offensive coordinator Frank Reich, who was part of a Super Bowl victory over the Patriots with a backup quarterback.

The good news for Indy is that the only coaching vacancy still looks pretty attractive — if Andrew Luck is healthy.

Indy still has Pro Bowl receiver T.Y. Hilton, Pro Bowl tight end Jack Doyle, a revamped defense that showed major improvement as last season went along, the No. 3 pick in the draft and about $80 million to spend in free agency.

Luck, meanwhile, continues to be the big question as he rehabs from last January’s surgery for a partially torn labrum in his throwing shoulder.

Some believe McDaniels’ sudden change of heart was related to doubts about Luck’s health.

Ballard didn’t bother asking McDaniels why he made the decision.

On Wednesday, though, he attempted to alleviate lingering concerns about Luck while acknowledging the franchise quarterback still hasn’t thrown a football since returning from Europe late last year.

“At this point, we feel very strongly that Andrew is in a good place. He doesn’t need surgery,” Ballard said. “I have not gotten that from the two doctors that he’s seen here after the season. His strength is good. He’s working on his throwing motion and he’s working on his arm speed right now. He has not picked up a football, but he is throwing balls, working on arm speed.

McDaniels decision didn’t just leave the Colts in the lurch.

While Ballard said he likes all three and will honor their contracts by keeping them on the next coach’s staff, others strongly criticized McDaniels from walking away from them.

“Haven’t read the article but I can tell you there is NO excuse big enough to justify this,” Dungy wrote on Twitter in response to a story that indicated McDaniels stayed with the Pats because he was more comfortable with the team.

“It’s one thing to go back on your word to an organization. But having assistant coaches leave jobs to go with you then leave them out to dry is indefensible.”

But as the news conference continued, Ballard said people say no to job offers every day, he wished McDaniels well at the end of Tuesday night’s brief call and that his primary concern now is finding someone who wants the job.

“To me, it’s about being right,” Ballard said. “You’ve got to be right. It doesn’t matter if you’re the first out of the box and everybody praises you or you are the last one to make the hire. We want to be right.”