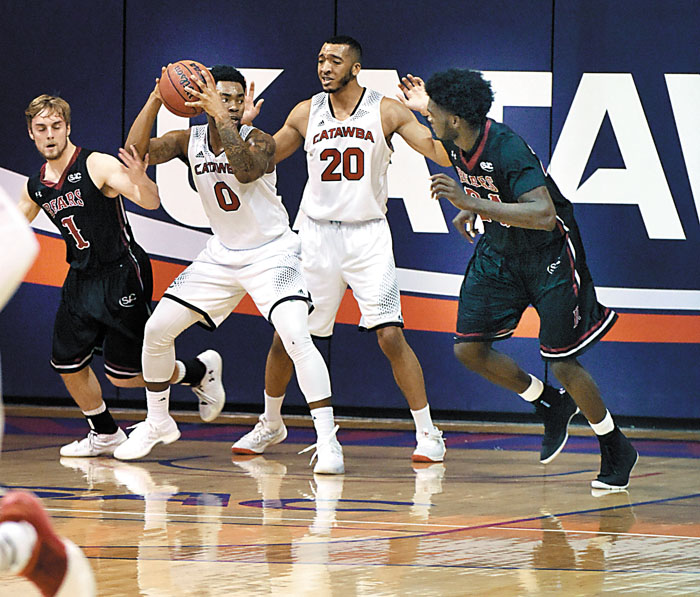 SALISBURY  — Anyone waiting for a letdown from the Catawba men’s basketball team will have to wait a little longer.

The ninth-place Indians still have a pulse after Wednesday’s 84-77 South Atlantic Conference win against visiting Lenoir-Rhyne — a triumph that moved them within a half-game of the league’s eighth and final conference tournament berth.

“Don’t give up on us yet,” junior guard Jordan Barber said. “We’ve still got a lot of talent on this team. It’s crazy because people keep doubting us, but we know we can beat the teams ahead of us.”

After losing 11 of its first 14 league games, Catawba (8-13, 5-11 SAC) has won its last two. Four conference games remain as it chases Coker and Anderson — both 5-10 in conference play — for a post-season berth.

“We’ve had to start our surge a little bit earlier because of injuries and poor play at the beginning of the year,” said Catawba coach Rob Perron. “It’s tough, because this team dominated us last time (an 85-63 loss on Jan. 3). We didn’t play very good defense. Tonight, we did a much better job of shrinking the floor on their drivers and shutting off their three-point shooters.”

Catawba limited Lenoir-Rhyne (9-13, 7-9) to eight field goals in the first half and a pedestrian 37.5 overall shooting percentage. The Indians, meanwhile, hit 57 percent from the field — led by T.J. Jeffers, Jeremy McLaughlin and Barber, who combined for 46 points on 16-for-21 sharpshooting. Teammate Jerrin Morrison, the SAC’s leading scorer, had 17 points despite a subpar performance. He still managed a major-league jam with about four minutes to play and a defense-splitting, liftoff layup that put the hosts ahead, 69-59, with 3:15 to play.

“He’s really a very powerful player,” Perron said. “It was almost like a long-jump. He wasn’t very high over the rim, but he took off.”

L-R responded with an 8-0 run and inched within 69-67 when Dijbril Diallo — a penetrating guard from Guinea and the game’s high-scorer with 26 points — hit from the left side with 2:20 remaining. It nearly erased all of Catawba’s 17-point, second-half edge.

“We told ourselves, ‘We can’t give up this big lead,'” said Barber. “We saw what was happening and had to grit down.”

“The key was having that next-play attitude,” said Jeffers, a freshman out of the prestigious Burlington School. “We made some mistakes, but we always kept that next-play mentality.”

It was Jeffers who made the next one. The 6-3 guard stole the ball near the L-R basket, raced down court and converted a runaway layup that put Catawba ahead 73-67 with 1:56 to play. “I had just turned the ball over right before that,” he said. “In my mind I knew I had to make some kind of play.”

Twenty seconds later Barber snagged one of his nine rebounds, drove the length of the court and hit a bucket that stretched the lead to eight.

“We needed to come up with some plays,” he said. “I got the ball, saw the lane and had to take it. There was nobody in front of me.”

“We’ve talked about not turning those into dipsy-doodle plays,” said Perron. “I liked how Jordan carved his way and walled off the defender with his shoulder. It was a really intelligent play.”

L-R continued its breathtaking race to the finish and drew within 80-77 when Diallo scored on an uncontested layup with 21 seconds to go. The Indians secured the win with a pair of John McRae free throws and a Carter Phillips dunk in the closing seconds.

NOTES: Catawba plays a non-conference game at Bluefield State on Saturday and visits Coker next Wednesday. A victory there would make its Feb. 17 home game against Carson-Newman a now-or-never showdown.