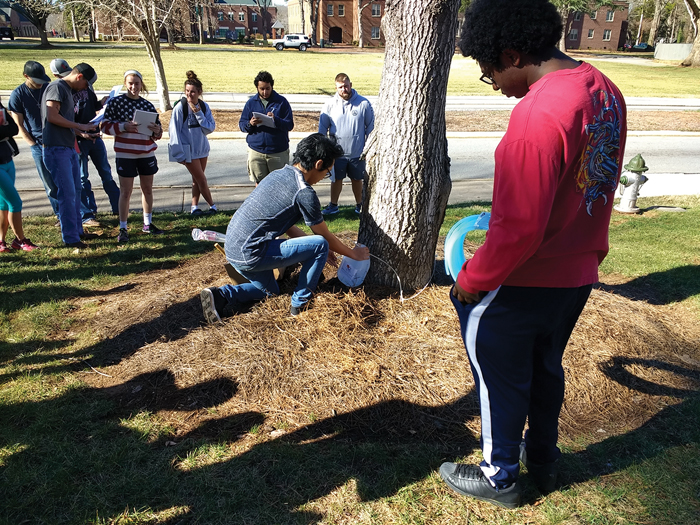 SALISBURY — The Piedmont of North Carolina isn’t known for maple syrup production, but students and professors at Catawba College have taken advantage of the recent cold weather to give it try.

Over the last week since recent the spell of snow, students in professors Tyler Davis, Jay Bolin and Carmony Hartwig’s environmental and biology courses have been tapping maples trees on the Catawba College campus and adjacent Fred Stanback Jr. Ecological Preserve.

Maple sap is the raw material from which pure maple syrup is made. On Catawba’s campus, sugar, red and southern sugar maples were tapped for their sap. The trees store carbohydrates, produced from photosynthesis, in their stems, trunks and roots, which are converted into sugars while they are dormant over the winter.

During the week of sap collection, students read articles and discussed the process through an environmental and biological lens.

“This maple sugaring activity demonstrated environmental stewardship through the careful selection and tapping of the trees and the considerate use of the sap so as to not waste it,” explained senior English major Jonathan Rife of Apex.

The weather conditions for sap collection require daily temperature fluctuations above and below freezing. Changes in sapwood pressure caused by the daily freeze-thaw cycling moves sap up and down within the tree. The erratic weather of the North Carolina Piedmont typically does not provide a consistent run of days to make maple sap sugaring practical, one of the reasons maple syrup production is not a viable for commercial production in this area. In the North Carolina Piedmont, these conditions are met for just a few weeks in mid-to-late January in most years.

“Warm days and freezing nights are really specific! (Global) warming will lead to less of those days. I don’t want to lose access to syrup!” said student Charlie Hagood of Concord.

The process of producing pure maple syrup is one that has experienced little change over the years. The fundamentals of tapping maple trees, collecting sap and evaporating and condensing sap into syrup by boiling is essentially the same process that Native Americans used centuries ago. Because the conversion of sap to syrup is essentially a concentration process, the sugar content in the sap determines the amount of sap required to produce a given quantity of syrup. Measurements from the three maple species had between 1 and 4 percent sugar, which averaged to about 40 gallons of sap to one gallon of syrup. To reduce one gallon of sap to maple syrup took approximately four hours.

“People don’t think about the time and energy that go into resources like maple syrup. It’s a long process; I had no idea,” said theater arts major Zac Karvon of Concord.

“It’s in classes like this that we get to think about things like this. We should be having conversations like this every day,” added student Taylor Mason of Winston-Salem.

Recently, a campus-wide event called “Catawba Maple Days” was held at the college’s Center for the Environment. Students, staff and faculty had the opportunity to taste two varieties of maple syrup. The first syrup was made from sugar maples that had a light honey hue and tasted wonderful like most maple syrup available at any grocery. The second variety was a “Catawba original” consisting of a mix of local red maple and southern sugar maple sap. The southern sugar maple is a tree that is probably rarely tapped for sap since it does not occur in the northeastern United States nor in the Appalachian Mountains of the Southeast. The syrup it produced was a rich reddish hue and had notes of chocolate and rich maple flavor.

Participants in “Catawba Maple Days” also participated in boiling off many gallons of sap collected by students and were able to compare and measure the sucrose content of the three maples collected using an instrument call a refractometer. Not surprisingly, the sugar maple had the highest sugar content.

“I like the sweet one better,” said Elizabeth George of Salisbury, senior biology student.

At the end of the long day of boiling off sap, only a few Mason jars of precious maple syrup were produced. However, many students involved were already excited for the next cold snap and were planning to continue collecting maple sap. It appears the foundation for a sweet new campus tradition was laid.