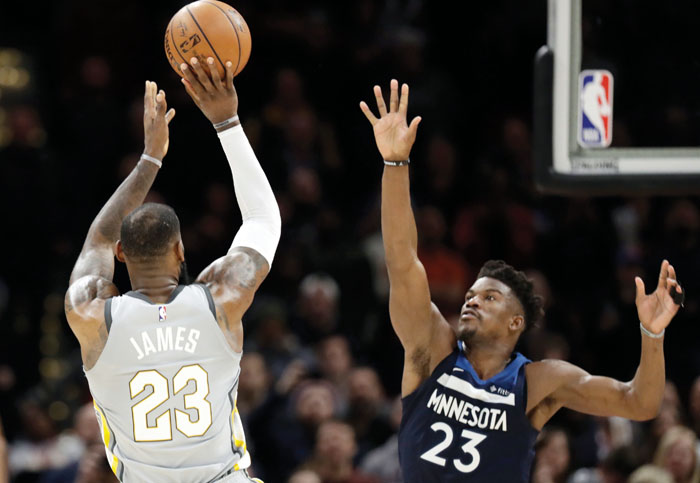 By TOM WITHERS, AP Sports Writer
CLEVELAND (AP) — One second. One shot. One player.
For one night, LeBron James made all of Cleveland’s problems disappear.
James dropped in a fade-away jumper over Jimmy Butler’s outstretched hand as the buzzer sounded in overtime, giving the Cavaliers a cleansing 140-138 win over the Minnesota Timberwolves on Wednesday night.
Moments after blocking Butler’s potential game-winning shot with 1.3 seconds left, James caught a long inbounds pass from Jeff Green, created some space from Butler near the foul line and sank a shot that ended Cleveland’s eight-game losing streak on national television.
“Once I caught it, I just trusted everything I’ve done in my career,” James said.
The Quicken Loans Arena crowd erupted and James was mobbed by teammates as the struggling Cavs, who have won just seven of their last 20 games, finally had something to celebrate after weeks of tension and turmoil in a season slowly slipping away.
But as he has done so many times, James delivered one of those moments that have defined him.
“The way we’ve been playing, we needed that,” said Cavs coach Tyronn Lue, who was back on the bench after falling ill Tuesday night in Orlando. “He was very special.”
James finished with 37 points, 15 assists and 10 rebounds in 48 minutes. The three-time NBA champion also passed Zydrunas Ilgauskas (5,904) on Cleveland’s career rebounds list.
Butler scored 35, and Karl-Anthony Towns had 30 for the Timberwolves, who were in position to win in OT before James came to Cleveland’s rescue.
With the score tied 138-all, Butler drove the left side and had a step on rookie Cedi Osman before pulling up for a short shot. However, James, who had missed a 3-pointer that would have won it in regulation, came from the weak side to reject it and set up the dramatic finish.
“I didn’t see him,” Butler said. “That’s part of the game.”
The Cavs had lost their eight previous network broadcast appearances this season, prompting James to say last week following a lopsided loss to Houston that he and his teammates should be dropped from any more telecasts.
Finally, they were primed for prime time.
However, James wasn’t ready to lift his self-imposed TV ban.
“It was a good win, but our record still stinks on national television,” said James, who scored nine points and assisted on Cleveland’s other basket in overtime. “We’ve got a couple coming up, so we’ll try to change that.”
J.R. Smith added 20 points and Isaiah Thomas had 13 and seven assists in one of his best games in weeks.
Towns made all six of his 3-point attempts and Minnesota drained a season-high 19 3-pointers, but the Timberwolves were unable to stop James when it mattered most.
“One second in the game, it’s a tough play — and he made a hell of a shot,” Minnesota coach Tom Thibodeau said. “You don’t want to foul him, and I thought KAT (Towns) had great pressure on the ball. LeBron was in command of the game offensively and handling the basketball. LeBron can read the game better than anyone in the league.”
LONG-RANGE RECORD
Cleveland made 21 3-pointers as the clubs combined to hit an NBA-record 40. The previous mark was 39 set by Golden State and Dallas on March 25, 2016.
REBOUND RECORD
In passing Ilgauskas, James is now Cleveland’s leader in points, rebounds and assists. He joins Michael Jordan and Kevin Garnett as the only players to lead their respective franchises in all three categories.
“Jordan and KG, so it’s a pretty cool thing,” James said. “I’m blessed and I’ve been fortunate enough to play this game at a high level for a long time.”
TRADE TIME
With the NBA trade deadline set for 3 p.m. Thursday, the Cavs are looking for a deal. The team has been hesitant to part with the first-round draft pick it acquired last summer in the Kyrie Irving trade, but Cleveland may have no choice in order to add a quality player capable of pushing the club back into title contention.
SWEET HOME CHICAGO
Butler will play in Chicago on Friday for the first time since being traded to Minnesota in June. He was the Bulls’ first-round draft pick in 2011 and played six seasons in Chicago.
TIP-INS
Timberwolves: Andrew Wiggins reached 6,000 career points. At 22 years, 349 days, he’s the sixth-youngest player to reach the plateau. James is the youngest at 21 years, 89 days. … Thibodeau has been impressed with Wiggins’ development. “He’s more of a complete player now,” he said. “The impact that he’s having on winning. We’ve seen he’s a gifted scorer, he’s shown that throughout his career, but now he’s doing other things — the defense, the passing, the hustle plays.” … Thibodeau and Lue go back to their days on Doc Rivers’ staff in Boston. Thibodeau understands the mental and physical grind for coaches, and expressed concern about Lue’s well-being. “I hope Ty’s taking care of himself,” he said. “That’s the most important thing is his health. He’s a great guy, he’s done a great job here. So always concerned about that.”
Cavaliers: Dwyane Wade sat out as he continues to rest on the second night of back-to-backs. The 36-year-old played 22 minutes at Orlando. … G Iman Shumpert, who has been linked to some trade possibilities, sat out with left plantar fasciitis. … Lue dismissed a comment made by Thomas after the loss to the Magic that one of the Cavs’ biggest issues is that they don’t make enough in-game adjustments. “That’s not true,” Lue said. … Thomas turned 29 on Wednesday.
UP NEXT
Timberwolves: At the Chicago Bulls on Friday.
Cavaliers: Begin a stretch of three straight road games before the All-Star break on Friday in Atlanta.
___
More AP NBA: https://apnews.com/tag/NBAbasketball